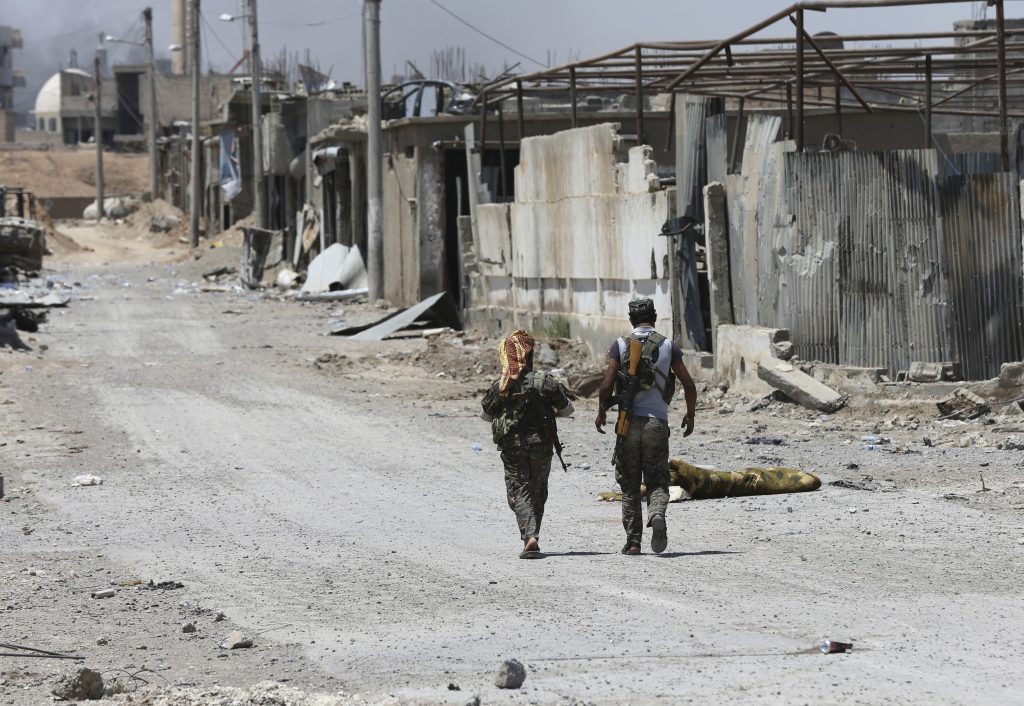 As U.S.-allied fighters hurtle down the eastern bank of the Euphrates River, a showdown could ensue between the U.S. and Russia, whose allies are racing to take over the same strategic oil-rich territory from the Islamic State terrorist group.

While the two sides will likely avoid a direct confrontation, the capture of Raqqa by the U.S.-backed forces, followed by their swift seizure of Syria’s largest oil field from IS, has irked Damascus, which needs the oil to boost its flagging economy.

As the rival international coalitions compete to defeat the terrorists and snap up oil and gas fields, the Russian military has issued a stream of angry statements, accusing the U.S. of colluding with the Islamic State and other terrorist groups in a bid to stymie the government’s advances.

Both the U.S. and Russia have embedded special forces with their respective partners and are supporting their advances with aggressive airstrikes. They have so far avoided any significant confrontations by maintaining talks and a hotline intended to prevent midair and ground incidents.

Ryan Dillan, spokesman for the U.S.-led anti-IS coalition, said contacts with Russia were continuing to avoid friction on the ground around Syria’s Al-Omar oil field, which was seized by the Kurdish-led Syrian Democratic Forces on Sunday. But he indicated the coalition was prepared for any possibility.

“We are prepared to defend our partners if they are attacked, whether by ISIS fighters or by anyone else. We certainly don’t want to come to that and we will continue to deconflict with our Russian partners,” he told The Associated Press on Tuesday. He suggested the SDF would continue to march south into the town of Boukamal on the Iraqi border after consolidating their gains, fueling concerns of conflict between the two groups and their superpower sponsors.

The stakes are high and the two sides have exchanged accusations of firing on one another in the past.

As the Islamic State terrorist group sheds its hold on territory, Iranian- and Russia-backed Syrian government forces have been gaining ground on the western bank of the Euphrates River, while the U.S.-backed SDF is advancing on the eastern bank and has already seized a major natural gas field and other smaller oil fields in addition to Al-Omar.

The Al-Omar field, which before the war produced around 9,000 barrels a day, is a major prize for both sides, particularly the Syrian government, whose coffers have been decimated by the country’s war, now in its seventh year.

The Syrian government and the Kurds have maintained a complicated relationship throughout Syria’s war, mostly refraining from fighting one another, while some rebels have accused the Kurds of being secretly aligned with the Syrian president. But U.S. support in the fight against IS has emboldened Syria’s Kurds, who now control nearly 25 percent of Syrian territory and have expanded into non-Kurdish, Arab-dominated areas, unsettling Damascus.

Their capture of Raqqa, the former heart of the Islamic State terrorist group’s so-called caliphate, was a highly prestigious win and has further raised their profile. Syrian state-run media ignored reports about the U.S.-backed force’s capture of Raqqa for days, and it’s not clear how Syrian troops will respond to their seizure of the Al-Omar field.

Both sides have upped the rhetoric, and have started talking about a possible confrontation.

“We don’t consider any town to be liberated before the Syrian army enters it and raises the Syrian flag over it,” Syrian Information Minister Mohammad Ramiz Turjuman said in an interview with the RIA Novosti news agency on Monday.

“We will confront any side that stands in the way of the Syrian Arab Army and its allies recovering any area they want,” said Khaled Abboud, whose views reflect government thinking.

Ahmed Abu Khawla, commander of the Deir el-Zour military council leading the battle for the SDF, said the goal was to completely liberate the eastern bank of the Euphrates River, adding that his troops did not wish to clash with any party other than IS at this stage.

“We were determined to get this oil field. We are expecting everything. We can see clashes and we have taken our precautions. Our project is to liberate the eastern bank — all of it,” he said.

“We are ready for all solutions: political, diplomatic or military,” he added.

Some have suggested the SDF now has enough cards to bargain with the Syrian government in future negotiations.

“I do expect the Assad regime will pressure the SDF to relinquish control of the oil field in return for some form of financial or energy support from the regime,” said Jennifer Cafarella, lead researcher at the Washington-based Institute for the Study of War. She said Russia, Iran, and Assad were likely preparing to cut a strategic deal with the main Kurdish militia for the future governance of eastern Syria.

“Russia and Assad could actually demand limits on the U.S. presence in eastern Syria as a condition of a deal,” she said.

Hassan Hassan, a Syria expert who co-authored a book about the Islamic State terrorist group, said he did not think there would be a showdown.

“We assume the SDF will continue to control the oilfield and surrounding areas if Russia sticks to the deconfliction understanding with Washington, which stipulates that they avoid attacking the other side in a certain area once the other side expels ISIS from it,” he said.

“The regime would have wanted to control the oilfields, but the SDF checkmated it,” he added.