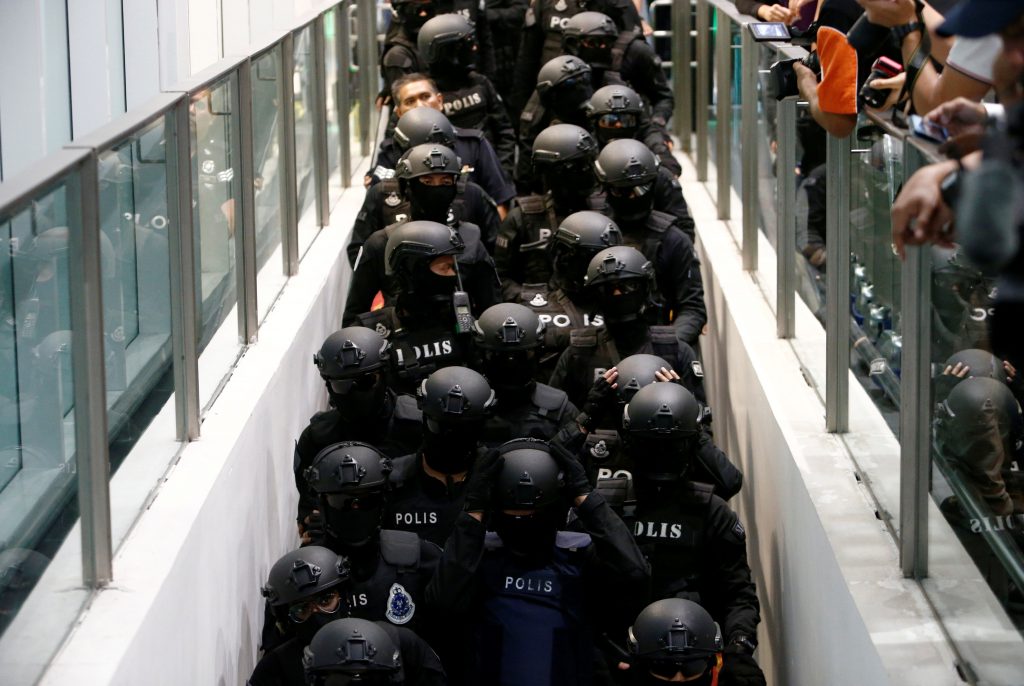 Handcuffed, wearing bulletproof vests and under heavily armed guard, the two women accused of murdering the half-brother of North Korea’s leader were pushed around a Malaysian airport in wheelchairs on Tuesday during a court visit to the crime scene.

Defense lawyers say the women thought they were involved in a prank for a media show when they encountered a man at the airport and did not know they were handling poison.

The two women were brought back to the scene as part of an entourage of court officials, led by trial judge Azmi Ariffin and accompanied by over 200 police officers and dozens of journalists, on a visit to retrace the events that unfolded before, during and after Kim Jong Nam’s death.

Defense lawyers requested the visit after video recordings of the women on airport closed-circuit television were screened in court.

Gooi Soon Seng, Siti Aisyah’s lawyer, said the visit was necessary to verify the surroundings and locations where the prosecution say the murder took place.

“The CCTV footages were taken from various cameras and various places, so from there we couldn’t get a complete picture on how (the incident) took place,” Gooi told a news conference after the visit.

The site visit covered various locations in the terminal shown in the videos, such as a restaurant where Siti Aisyah was seen meeting an unidentified man, the restrooms where police witnesses said both women had gone to after the attack on Kim Jong Nam, the clinic where the victim sought medical aid and the taxi stands where both suspects were seen after the attack.

Huong appeared unwell midway through the three-hour site visit, while Siti Aisyah broke down in tears. Both women were then provided wheelchairs.

Defense lawyers later said both Huong and Siti Aisyah were exhausted from being weighed down by their bulletproof vests.

Recordings on Feb. 13 show Huong approaching Kim and grasping his face from behind near the airport’s check-in counters before quickly leaving. Siti Aisyah could not be seen but was identified by a police witness as a figure running in another direction. The videos also show the women heading to separate bathrooms to wash their hands.

Both women were seen meeting with two men, identified only as Mr. Chang and Mr. Y, before Kim Jong Nam’s death. According to police, the men had applied liquid on the women’s hands, and were among four suspects-at-large charged together with the women for the murder.

The airport visit comes as the high-profile trial entered its third week. Twelve witnesses have testified so far.

Forensic and chemical weapons experts said Kim Jong Nam had died of nerve agent poisoning, and that VX had been found on Siti Aisyah and Huong’s clothes. Traces of the poison were also found under Huong’s fingernails.

Prosecutors say Siti Aisyah and Huong conspired with four others who are still at large to kill Kim Jong Nam.

South Korean and U.S. officials have said that Kim Jong Un’s regime was behind his half-brother’s death.

Kim Jong Nam, who was living in exile in Macau, had criticized his family’s dynastic rule of North Korea and his brother had ordered his execution, according to some South Korean lawmakers.

The hearing resumes in court on Wednesday.