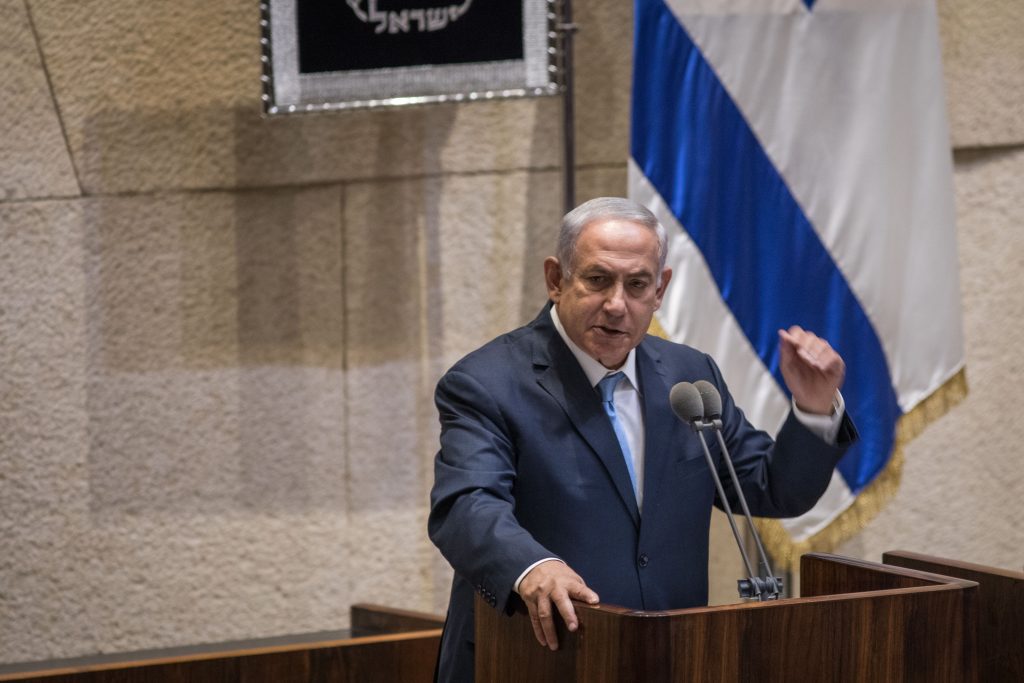 Israeli Prime Minister Binyamin Netanyahu opened the Knesset winter session on Monday with another broadside against his government’s critics, calling them “sourpusses” for refusing to acknowledge its successes.

“The industry of depression is still there and it has respected representatives in this house and in the media,” PM Netanyahu said.

“Today they say: ‘The public is soured,’ or ‘Netanyahu walks around with a soured expression.’ They cannot decide whether I am sour, smug, or both. [They say] that we are missing historic opportunities here. I remind you that these are the same people who criticized my speech on Iran to Congress, and they did so with a tone of authority and grave seriousness.”

“…In your hearts, you sourpusses know that in democratic elections we will win, because we represent very deep, very valuable things for many in this nation. The ministers, the heads of the committees and the MKs are all doing a great job together,” he said.

President Reuven Rivlin sounded a very different note, warning of the danger to democracy if opponents of the High Court have their way.

“I can only describe what I see in what appears to be an ongoing attempt to weaken the gatekeepers of Israeli democracy,” Pres. Rivlin said.

“For example, regarding the courts, an abyss lies between the responsible and courageous attempt to define, after many years, the breakthrough in the relations between the legislative and judicial branches, to limit judicial review, to ask questions about the appointment mechanism, to seek a more varied and representative panel of judges – and the attempt to intimidate the court, to weaken it as an institution and to invite the public to challenge its authority and its decisions,” the president said.

However, Knesset Speaker Yuli Edelstein said in his speech that “the separation of powers in Israel has become a myth,” that the executive and judicial branches have usurped the power of the Knesset, making “the opinions of the MKs unnecessary.”

“The division of power between the three branches and the strict observance [of that separation,] so that each of them will carry out its unique function, are necessary and not a nice decoration. These are the defining elements of our governmental structure. These are the things which guarantee the freedom of our citizens. Without them, Israel’s prosperity as a Jewish and democratic state is in danger,” Edelstein stated.

The man at the center of the controversy on Monday was Education Minister Naftali Bennett (Jewish Home), who said he is determined to do something to correct the imbalance of powers.

“Three times the Court overturned the outline for removing infiltrators from Israel, and the Court overturned the canceling of the residency of Hamas members in East Yerushalayim. The third apartment law was disqualified; the biannual budget law; the Regulation Law is frozen; the draft law was canceled; The corporation law is frozen and more. The Court is not supposed to intervene to determine if a law is appropriate or not; that’s the Knesset’s authority,” Bennett asserted.

“I don’t particularly like some of the laws, but the Knesset is the sovereign. Members of the Knesset were elected by millions of Israeli citizens, and the High Court cannot annul the will of the people just because it does not see eye to eye with a law.

“The Court is entitled to intervene only when it comes to the tyranny of the majority, governmental tyranny vis-à-vis the individual, and this is not the case, for example, with nullifying the Third House law. Not everything is adjudicable, not everything is ‘bagatzable’, “ he said, using the Hebrew acronym for the Court, Bagatz, for Beit Din Gavohah. “The time has come to determine exactly when the Court is entitled to invalidate a law of the Knesset or a government action. This mustn’t be left ambiguous.

“The law will also include the ‘cessation clause’ to grant the Knesset the ability to entrench a law so that the Court can’t annul it. This is done by a majority of Knesset members.”