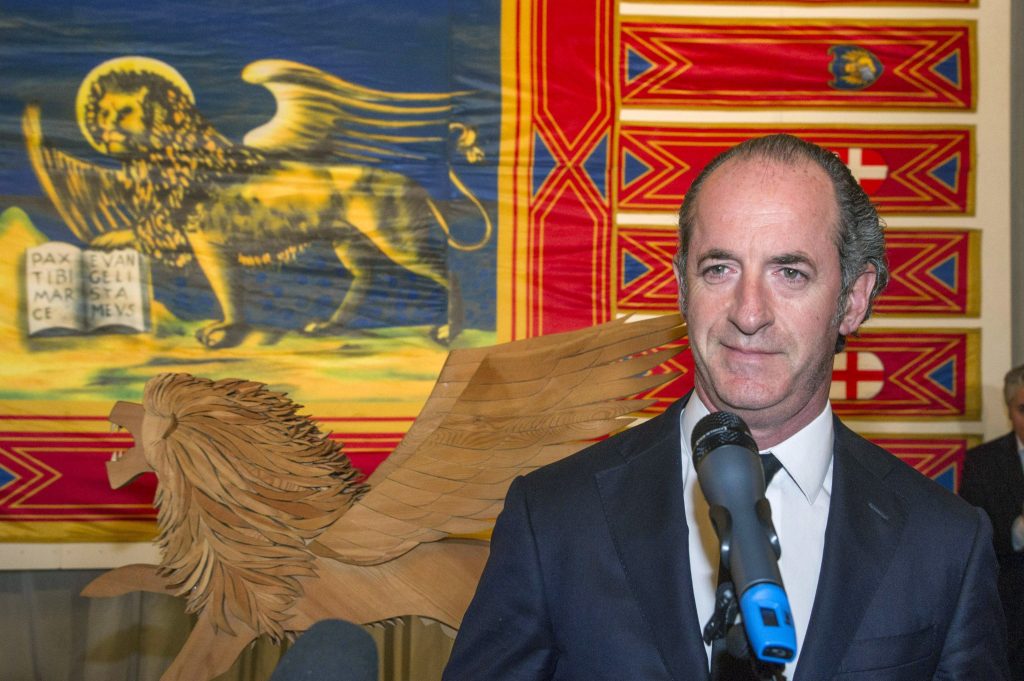 The presidents of Italy’s wealthy northern regions of Veneto and Lombardy on Sunday claimed victory in autonomy referendums that seek to grab additional powers and tax revenue from Rome, riding a global tide of self-determination that has swamped Spain’s Catalonia region.

The votes were nonbinding, but the leaders of the neighboring regions hope to leverage strong turnout in talks with Italy’s center-left government. As leading members of the anti-migrant, anti-EU Northern League, they want to keep more tax revenue and have autonomy over such policy areas as immigration, security, education and environment.

“This is the big bang of institutional reform,” Veneto President Luca Zaia said in Venice. “We are convinced, and I hope Rome understands, that this is not the wish of a political party. These are the wishes of the people.”

In Milan, his counterpart in Lombardy, Roberto Maroni, said that with the votes, the two regions “can unify our forces so we can do the battle of the century.”

The two leaders say they will meet with their regional councils to finalize their requests before going to Rome to meet with Premier Paolo Gentiloni.

Unlike in Catalonia, the referendums do not seek independence and were approved by Italy’s constitutional court. Still, the autonomy drive is a powerful threat to Rome’s authority. Together, Veneto and Lombardy account for 30 percent of Italy’s GDP and nearly one-quarter of the nation’s electorate.

Maroni said an overwhelming 95 percent of his region’s vote went to “yes,” with turnout above 40 percent of Lombardy’s 8 million voters. That far exceeded the bar for success that he set at 34 percent, which was the turnout for a national referendum on constitutional reform in 2001.

Independence-minded Veneto easily met a turnout threshold to validate the vote set by Zaia, with some 60 percent of the region’s 4 million voters casting ballots. According to early returns, 98 percent voted “yes.”

The Democratic Party, which leads the national government in Rome, had criticized the referendums, saying the non-binding votes carried no legal weight, were not needed to trigger autonomy negotiations and were a costly waste of resources.

Such arguments played into the hands of the “yes” campaigners, who consider those put-downs to be part of the anti-democratic, centrist decision-making in Rome. Those sentiments have been echoed in the Catalan independence drive in Spain, in the U.S. election of Donald Trump as president and in Britain’s vote to leave the 28-nation European Union.

The victory raises the Northern League’s profile ahead of national elections next year. But it also has the power to create a wedge between the rich north and the poor south just as Northern League leader Matteo Salvini, who supports autonomy, has pushed for a more national profile for the once-northern party.

The referendum campaign drove hard on the theme that too much northern tax revenues were going to the less-efficient southern regions.

The Northern League was founded with the goal of secession for the wealthier, more productive northern regions, but it gave that up when it joined the national government under then-Premier Silvio Berlusconi in the 1990s. During that period, it pushed for federalism, which lost steam during Italy’s long economic crisis. Autonomy has become the new expression of the party’s identity politics.

The referendum victory is just the first step as the regions seek greater autonomy. Some of the policy issues they are seeking can be won with a new law. But many of the more emotional issues — including greater fiscal control, immigration and security issues — would requiring difficult-to-achieve constitutional changes.

“I don’t think this is possible,” said Paolo Natale, a political scientist at Milan’s state university. “It will be difficult for the state to accept that they take over education and security policy. The management of immigration policy has to be done at a national level.”

The Italian constitution already grants varying levels of autonomy to five regions in recognition of their special status: the largely German-speaking Trentino-Alto Adige, French-speaking Aosta, the islands of Sardinia and Sicily, and the Friuli-Venezia Giulia region for its position on the border with then-Yugoslavia as a Cold War hedge.