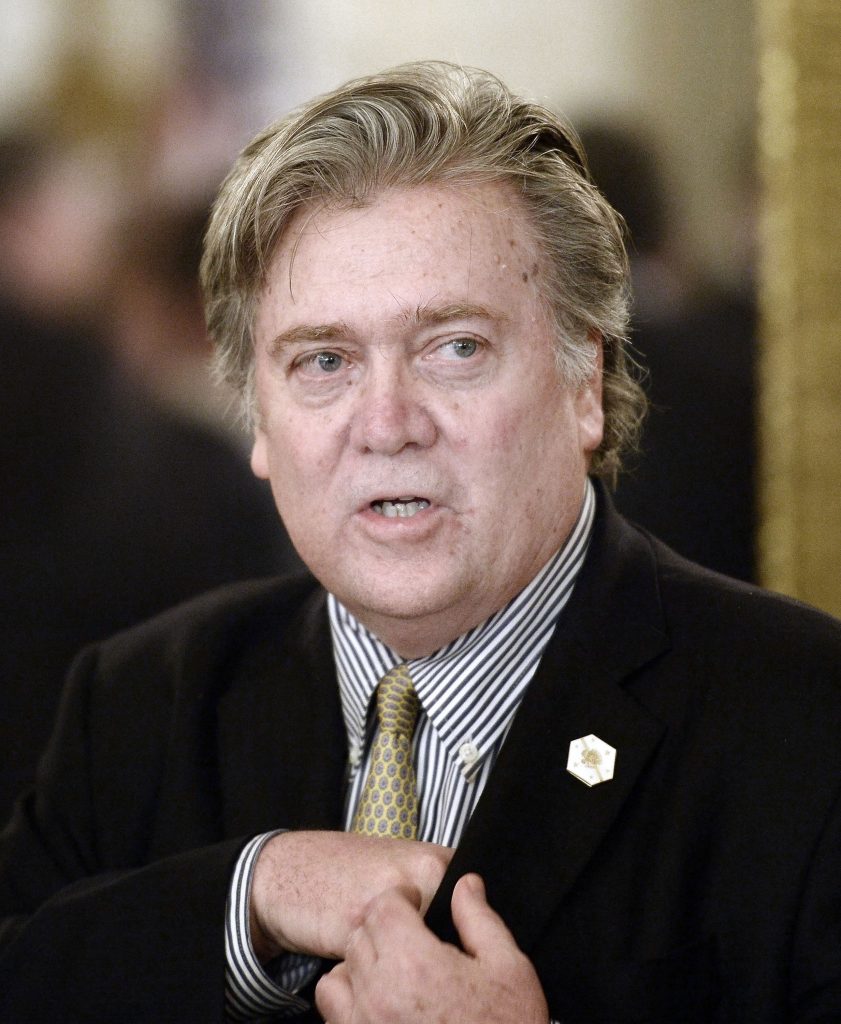 Shortly after President Donald Trump’s chief strategist Steve Bannon left the White House, a company with close ties to him was hired by the United Arab Emirates to launch a social media campaign against its Arab neighbor, Qatar.

It was part of a multimillion-dollar effort by several Middle Eastern nations to isolate Qatar that received a boost when Mr. Trump criticized the country that for years had been a critical regional ally.

The UAE is paying $330,000 to a firm with the same parent company as Cambridge Analytica, the business Mr. Trump employed to reach voters with hyper-targeted online messaging during the campaign, to blast Qatar on social media, according to federal records.

Bannon, who remains one of Mr. Trump’s closest advisers, has long had an interest in the region. He has huddled with UAE officials behind closed doors, visited the country as recently as last month and pushed for a group of Middle Eastern nations, including the UAE, in their bitter dispute with Qatar.

On Monday, Bannon is scheduled to speak at a daylong conference in Washington organized by the Hudson Institute, a conservative think tank, and paid for by multiple donors, entitled “Countering Violent Extremism: Qatar, Iran and the Muslim Brotherhood.”

The speech follows Bannon’s September meeting in the UAE with its crown prince, Sheikh Mohammed bin Zayed al-Nahyan. The two weren’t strangers: Bannon, Mr. Trump’s son-in-law Jared Kushner and ousted National Security Adviser Michael Flynn met with the crown prince at Trump Tower during the presidential transition in December. That meeting triggered controversy, as the UAE hadn’t notified the outgoing Obama administration about the visit as is customary.

The UAE also helped broker a meeting in January between a Bannon friend, Blackwater founder Erik Prince, and a Russian close to President Vladimir Putin, to try to establish a back-channel line of communication to Moscow for Mr. Trump just days before his inauguration, according to The Washington Post; Prince met with the Russian in the Seychelle islands off East Africa.

Prince lives in the UAE and had a multimillion dollar contract with that government to assemble a mercenary security force there. His firm also does security work in Africa, much of it for Chinese interests. But Bannon has encouraged Prince to move back to the U.S. and run for office, and in recent weeks, Prince has begun to publicly consider a primary challenge to Wyoming GOP Sen. John Barrasso.

The UAE, Saudi Arabia, Bahrain and Egypt cut off all ties with Qatar in June, supposedly in response to its alleged support of terrorism and ties to Iran, and mounted a blockade against the nation. President Trump abruptly began accusing Qatar of funding terrorism despite its importance as host to al Udeid, the largest American military base in the Middle East, home to nearly 10,000 troops.

“The U.S. has a pretty substantial presence across the Middle East, but al Udeid is the most important,” said Mara Karlin, who worked at the Defense Department during the prior two administrations and is now a professor at the Johns Hopkins School of Advanced International Studies.

Bannon, who through a spokesman declined to comment for this story, has said little publicly about Qatar. But Breitbart News, the far-right website he ran before going into the White House and where he is now once again ensconced, published more than 80 Qatar-related headlines since the blockade began, most of which were critical of the nation.

“Jihad-Friendly Qatar May Have Inspired Former Gitmo Detainees to Return to Terror,” declared a June 15 headline.

Bannon has said he is planning to start a global conference series through Breitbart. “We are in advance discussions about having Breitbart sponsor a major security conference in sub-Saharan Africa, the Persian Gulf, central Europe, and East Asia, in early to mid-2018,” he told Bloomberg recently.

Trump’s comments attacking Qatar this summer were at odds with what other administration officials were saying. Secretary of State Rex Tillerson had called for the Gulf countries to resolve the dispute. “We certainly would encourage the parties to sit down together and address these differences,” he said.

“Many people felt blindsided because they were getting mixed messages,” said Marc Lynch, director of the project on Middle East Political Science at George Washington University. “Trump’s tweets really undermined the administration.”

Tillerson is traveling to the Middle East, where he has planned stops in Saudi Arabia and Qatar to discuss the Gulf dispute with leaders from both countries.

H.E. Sheikh Saif bin Ahmed al-Thani, director of the government communications office for Qatar, said his country, aided in part by an agreement with the U.S., has done more to combat terrorism than any other nation in the region. He said there has been no shift in U.S. policy toward Qatar and declined to respond to questions about Bannon.

“While Qatar works openly and transparently with the United States and its allies to share information and fight terrorism wherever it exists, UAE spends its energy and resources hacking websites and planting fake news stories,” he said. “When that doesn’t work, they pay to spread disinformation about Qatar through advertising and social media. That is their choice, but it won’t change the facts.”

Representatives of the UAE and Saudi Arabia declined to comment.

The conflict — and Mr. Trump’s apparent willingness to encourage it — spurred a costly and coordinated multi-faceted campaign. The situation began to escalate last May, when the UAE orchestrated the hacking of Qatari news and social media sites to plant incendiary quotes falsely attributed to Qatar’s emir.

In Washington, it set off a feeding frenzy in influence circles, with the Gulf states on both sides forking over more than $7 million in new contracts since June to influence-peddlers, including former Attorney General John Ashcroft’s law firm and the Podesta Group, co-founded by a longtime ally of Hillary Clinton, according to federal records.

Another firm, the Harbour Group, was paid more than $2.5 million by the UAE for work between October 2016 and March 2017, according to the most recent filing available, and signed a contract with the Royal Embassy of Saudi Arabia 11 days before the blockade was announced, paying the firm $80,000 per month. Harbour, which has represented the UAE for 15 years, declined to comment.

“Since very little is actually happening on the ground, they’re ramping up the propaganda,” Lynch said.

Those attending Monday’s conference in Washington will be given copies of a new documentary with a strong point of view about the Middle East conflict.

The event features two other keynote speakers, former Defense Secretary Leon Panetta and former CIA Director David Petraeus, both of whom worked in the Obama administration. They were hired to speak through Washington Speakers Bureau, where they are clients. Bannon is not listed as a client on the website and the company did not respond to a request for comment.

Panetta, who said in an interview that he was not aware Bannon was speaking at the event, called the administration’s rhetoric on Qatar a “knee-jerk reaction” to the blockade.

One of the event donors is Elliott Broidy, a Los Angeles-based investment manager who serves as a deputy finance chair for the Republican National Committee, according to a person with knowledge of the arrangement who was not authorized to speak publicly. Broidy, who also sits on the board of the Republican Jewish Coalition, referred questions to the Hudson Institute, which did not return calls.

SCL Social Limited, which shares the same ownership and leadership as Cambridge Analytica, recently disclosed a $330,000 contract with the National Media Council of UAE for “a wide range of services specific to a global media campaign,” according to Foreign Agents of Registration Act records. It received $166,500 Sept. 20.

Bannon, who served as White House chief strategist until August, retained an ownership stake in Cambridge Analytica worth $1 million to $5 million when he entered the White House, according to his financial disclosure report. He had served as vice president and secretary for Cambridge Analytica and received a monthly consulting fee for his work before resigning his position there in August 2016. Bannon was supposed to sell the stake while he served in the administration, as part of his ethics agreement, and obtained a certificate of divestiture in April 2017 to defer taxes on the potential sale. However, there’s no indication that he actually sold the stake, as he never filed the transaction report that’s required after the purchase or sale of any asset.

Another of the company’s owners is Robert Mercer, the billionaire who spent millions of dollars helping Mr. Trump get elected. Cambridge Analytica didn’t respond to a request for comment.

The House Intelligence Committee, which is looking into whether Trump associates worked with Russia to meddle in the 2016 election, has questioned Cambridge Analytica, according to the Daily Beast.

SCL had a $75,000 budget specifically for pushing social media during the United National General Assembly that included ad buys exhorting a boycott of Qatar on social media. The ads primary target audience were non-governmental organizations, foreign diplomats and specific reporters, according to the records.

But there were signs that the campaign may not have worked, at least not with the president.

Mr. Trump’s tone on Qatar softened in the weeks after Bannon left the White House, placing a greater emphasis on the need for a resolution to the conflict. At the U.N. in September, Mr. Trump met with Qatari Emir Tamim bin Hamad al-Thani, emphasizing the deep ties between the two countries while failing to respond to questions about his previous allegations.

“We’ve been friends a long time; people don’t realize that,” Mr. Trump said. “And we are right now in a situation where we’re trying to solve a problem in the Middle East, and… I have a very strong feeling that it will be solved pretty quickly.”

James Whitlow contributed to this report.