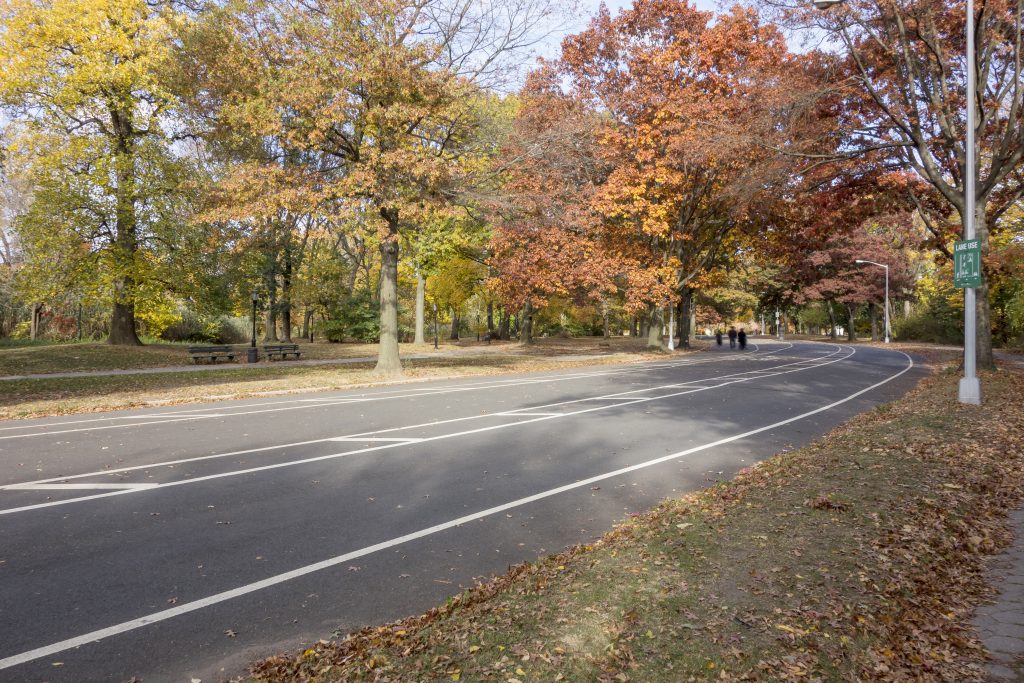 De Blasio has already been steadily closing the park to cars. In 2015, the West Drive was permanently closed to all vehicles. In the summer of 2017, the East Drive was completely closed to vehicles, from July 17 until September 11. Since September 11, the East Drive has been open only during weekday morning rush hours, from 7:00 – 9:00 a.m. But on Monday, de Blasio announced that the park will be permanently closed to all vehicles starting January 2, 2018.

“I can’t possibly describe to you how much Prospect Park has meant to my family,” de Blasio said during Monday’s announcement. “Chirlane and I were married under a tree in this park … Our kids played little league on the fields in this park.

“And in fact, this park was built before the automobile existed … the park was built for people. It was built to be an oasis. It was built to be a place of peace and safety; and in the long arc of history, we saw the time come when the automobile became predominant, cars were let into the park and from that moment until today, cars were a part of this park for better or for worse. That’s been that way for a long, long time, but today that changes once and for all.”

According to a statement released by de Blasio’s office, “While the analysis of the car-free trial is still being finalized, its preliminary results clearly indicate no alternative driving route experienced more than a minimal delay, with most experiencing no change in travel times whatsoever. Based on that data, officials are now confident a fully car-free park can be implemented without adverse impact.”

Motorists who spoke with Hamodia expressed mixed feelings about the park closure.

“The park drive alleviates a lot of traffic from the side streets,” said Moshe Rabinowitz of Boro Park. “What’s going to happen now is that the congestion that de Blasio has recently been complaining about – talking about how he wants to reduce it – is just going to get worse. How is he going to alleviate congestion around Park Slope by reducing the number of roads on which cars can drive?”

Chaim Lesser of Marine Park is both a bicyclist and a driver, and says he is pleased with the plan.

“I think it’s a good idea, because now I can go biking anytime I like without having to deal with cars,” said Lesser. “It’s a park, not a highway.”

Lesser said that when driving, he never uses the park roads anyway, a sentiment shared by Bashi Fried of Midwood.

“A park shouldn’t be for cars,” said Fried. “It’s dangerous. There are lots of kids there. I always drive around, and never through, the park. One has to be extremely conscious of pedestrians there.”

But Rabbi Simcha Perlowitz, one of several rebbiem at Yeshiva Ketana of Queens who commutes from Boro Park, said that the new rule will be a significant hardship.

“To connect from Boro Park to the Jackie Robinson Parkway, we go through the Park every day. By at least allowing the East Drive to be open during morning rush hours, as it is now, saves us 10 or 15 minutes every day.”

Rabbi Perlowitz said that as the joggers have their own lane, they’re not affected by the cars, “and there aren’t that many joggers at that time of day, anyway.”

Rabbi Perlowitz said that he and many others are “very upset” at the new no-car rule, and that they plan to contact City Hall to express their frustration, in the hope that it will not be implemented.