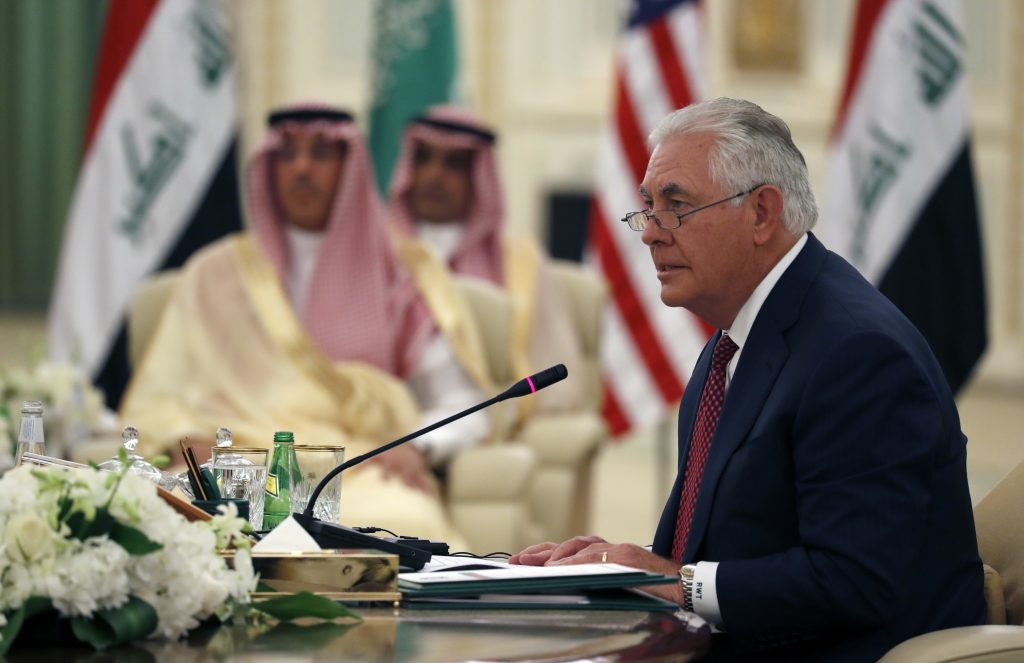 U.S. Secretary of State Rex Tillerson on Sunday pressed the Trump administration’s case for isolating and containing Iran in the Middle East and beyond as he pushed for Saudi Arabia and Iraq to unite in common cause to counter growing Iranian assertiveness. He called for the removal of Iranian and Iranian-supported militias from Iraq and urged other countries, particularly in Europe, to halt any business they do with Iran’s Revolutionary Guards.

Speaking after participating in the inaugural meeting of the Saudi Arabia-Iraq Coordination Committee with Saudi King Salman and Iraqi Prime Minister Haider al-Abadi, Tillerson told reporters that an independent and prosperous Iraq would be a foil to Iran’s “malign behavior.”

“We believe this will in some ways counter some of the unproductive influences of Iran inside of Iraq,” he said at a news conference with Saudi Foreign Minister Adel al-Jubeir shortly before leaving Riyadh to fly to Qatar. Referring to Shiite militia in Iraq that are backed by Iran he said: “Those fighters need to go home. Any foreign fighters need to go home.”

Tillerson said countries outside of the region could also play a role, primarily by shunning the powerful Revolutionary Guards, which play a major role in Iran’s economy and were added to a U.S. terrorism blacklist earlier this month. Companies and countries that do business with the guards “really do so at great risk,” he said.

“We are hoping European companies, countries and others around the world will join the U.S. as we put in place a sanctions structure to prohibit certain activities of the Iranian Revolutionary Guards that foment instability in the region,” Tillerson said.

Earlier, at the coordination committee meeting, Tillerson told the Saudi king and Abadi, that the event highlighted the improving ties between the longtime rivals and showed “the great potential” for further cooperation. He noted the August reopening of a major border crossing and the resumption of direct flights between Riyadh and Baghdad.

“Both represent the beginning of what we hope will be a series of even more tangible actions to improve relations and strengthen cooperation on a host of issues,” he said. “Your growing relationship between the kingdom and Iraq is vital to bolstering our collective security and prosperity and we take great interest in it.”

His participation in the meeting comes as U.S. officials step up encouragement of a new axis that unites Saudi Arabia and Iraq as a bulwark against Iran’s growing influence from the Persian Gulf to the Mediterranean Sea. Amid the push for that alliance, the Iraqi government is struggling to rebuild recently liberated Islamic State strongholds and confronts a newly assertive Kurdish independence movement.

History, religion and lots of politics stand in Tillerson’s way, but both the Saudi king and the Iraqi prime minister appeared optimistic about the prospects.

“We are facing in our region serious challenges in the form of extremism, terrorism as well as attempts to destabilize our countries,” Salman said. “These attempts require our full attention. … We reaffirm our support for the unity and stability of our brother country of Iraq.”

Abadi expressed pleasure with “the thriving relations between our two brotherly countries.”

“We are open and we want to move away from the past,” he said. “The region cannot tolerate any further divisions. Interference in the internal affairs of other state should stop.”

Shiite-majority Iraq and Sunni-led Saudi Arabia, estranged for decades after Saddam Hussein’s 1990 invasion of Kuwait, have tried in recent years to bridge their differences. Saudi Arabia reopened its embassy in Baghdad in 2015 after a quarter century. The first visit by a Saudi foreign minister to Baghdad came in February this year, followed by the border crossing reopening in August and resumption of direct flights between the capitals suspended during the Gulf War.

Over the weekend, the Saudi oil minister, Khalid al-Falih, made a high-profile appearance at Baghdad’s International Fair, and held talks with his Iraqi counterpart, Jabar al-Luabi.

Nevertheless, the relationship is plagued by suspicion. Iran’s reported intervention in Iraq’s semiautonomous northern Kurdish region, after last month’s much criticized vote for independence in a referendum, has deepened the unease.

The Sunni-led kingdom, which had opposed the U.S.-led invasion of Iraq in 2003, has long been anxious about Iran’s footprint in Shiite-majority Iraq and its network of allied militias there. Saudi Arabia has consistently described Iraq as an Arab nation, to differentiate it from Shiite but non-Arab Iran.

The kingdom is also looking to Iraq as a potential trading partner and as a major investment opportunity amid reconstruction efforts in cities such as Mosul, which were devastated by the war against the Islamic State group.