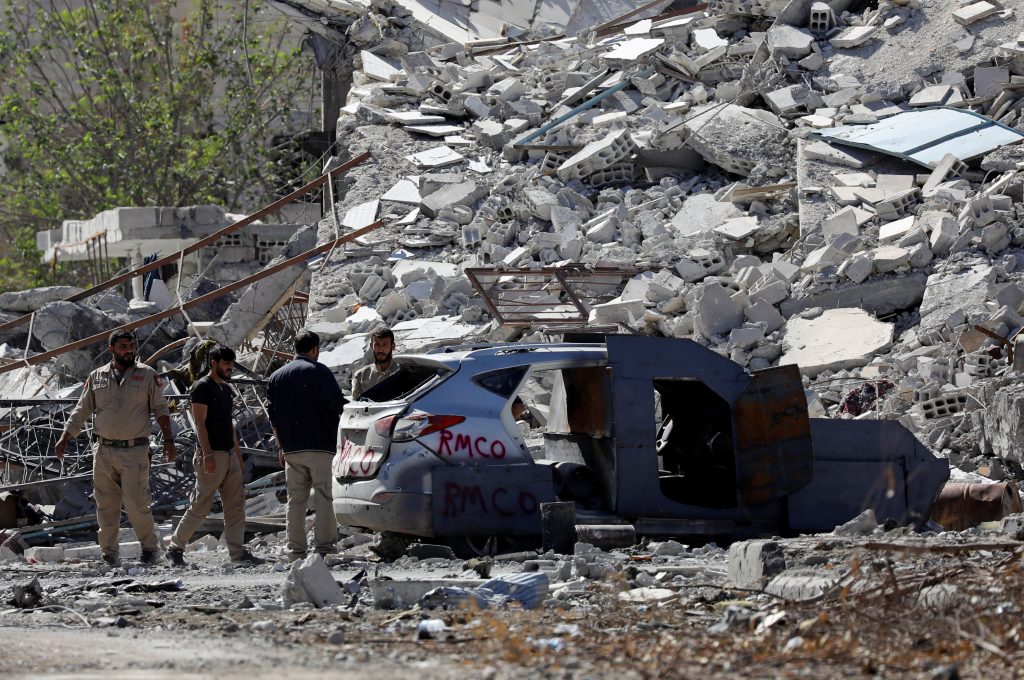 Russia accused the U.S.-led coalition in Syria on Sunday of wiping the city of Raqqa “off the face of the earth” with carpet bombing in the same way the United States and Britain had bombed Germany’s Dresden in 1945.

The Russian Defense Ministry, which has itself repeatedly been forced to deny accusations from activists and Western politicians of bombing Syrian civilians, said it looked like the West was now rushing to provide financial aid to Raqqa to cover up evidence of its own crimes.

Major-General Igor Konashenkov, a spokesman for the Defense Ministry, said in a statement that around 200,000 people had lived in Raqqa before the conflict in Syria, but that not more than 45,000 people remained.

“Raqqa has inherited the fate of Dresden in 1945, wiped off the face of the earth by Anglo-American bombardments,” said Konashenkov.

Most of the German city was destroyed in Allied bombing raids just before the end of World War II.

Though he said Russia welcomed Western promises of financial aid to rebuild Raqqa, Konashenkov complained that numerous Russian requests for the West to give humanitarian aid to Syrian civilians in other parts of the country had been rejected in previous years.

“What is behind the rush by Western capitals to provide targeted financial help only to Raqqa?” said Konashenkov.

“There’s only one explanation – the desire to cover up evidence of the barbaric bombardments by the U.S. air force and the coalition as fast as possible and to bury the thousands of civilians ‘liberated’ from Islamic State in the ruins.”

The U.S.-led coalition says it is careful to avoid civilian casualties in its bombing runs against Islamic State in both Syria and Iraq, and investigates any allegations. It has previously denied killing civilians in airstrikes on Raqqa, saying its goal is “zero civilian casualties.”