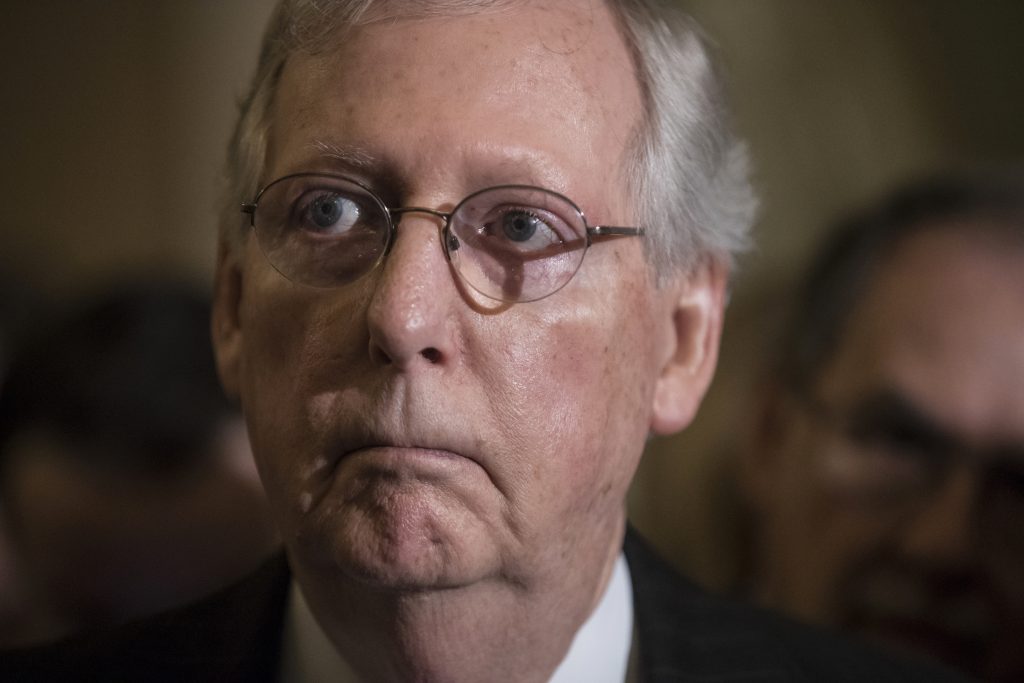 A proposal by two senators — Republican Lamar Alexander of Tennessee and Democrat Patty Murray of Washington — would extend for two years federal insurance payments that Pres. Trump has blacked, in an effort to stabilize insurance markets.

Asked whether he would bring the bill to the floor, McConnell said on CNN that he was waiting “to hear from President Trump what kind of health-care bill he might sign.”

“If there’s a need for some kind of interim step here to stabilize the market, we need a bill the president will actually sign. And I’m not certain yet what the president is looking for here, but I will be happy to bring a bill to the floor if I know President Trump would sign it,” the Republican said. He added of Pres. Trump: “I think he hasn’t made a final decision.”

The plan unveiled last week likely has 60 votes in the Senate, mostly from Democrats, and Senate Minority Leader Chuck Schumer on Sunday urged McConnell to bring it to the floor “immediately, this week.”

“This is a good compromise,” Schumer said on NBC. He predicted it would pass “by a large number of votes” and that the president would ultimately sign it to avoid the blame for rising insurance premiums.

“If Republicans think that if premiums go up they’re going to avoid the blame, if Senator McConnell thinks that, he’s wrong,” Schumer said.

Pres. Trump at first suggested he supported the temporary fix as he continues to hold out hope for the passage of legislation that would repeal and replace former President Barack Obama’s Affordable Care Act, which Republicans who control the House and Senate have repeatedly failed to achieve. But White House officials said later that Pres. Trump would only sign an interim bill that also lifts the tax penalties that Obama’s health-care law imposes on people who don’t buy coverage and employers who don’t offer plans to employees. The White House also wants provisions making it easier for people to buy low-premium policies with less coverage. Top Senate Democrats reject those demands.

White House budget director Mick Mulvaney said on CBS on Sunday that Pres. Trump doesn’t want to back a plan “without also getting something for folks who are being hurt.”

“And I think the criticisms you’ve heard this week are like, ‘Look, I’m okay with doing a deal.’ This is the president now. ‘But I’m not getting enough for the folks who are getting hurt. So give me more by way of associated health plans. Give me more of the things that we know we can do for folks back home to actually help them,'” Mulvaney said.

“I think there’s actually a pretty good chance to get a deal,” he added. “It’s just Murray-Alexander in its current form probably isn’t far enough yet.”

The White House is also focused on taxes, with Mulvaney pitching Pres. Trump’s plan, which would lower the corporate tax rate and double the standard personal income tax deduction. Pres. Trump will be discussing the plan Tuesday at a meeting with GOP senators.

Both Mulvaney and McConnell denied the plan would balloon the deficit, insisting it will spur enough growth to pay for itself.

“In order for the president’s agenda to advance, we have to be able to elect people who support the agenda. And so these interparty skirmishes are all about whether or not we can nominate a candidate who can win in November,” he said on CNN.