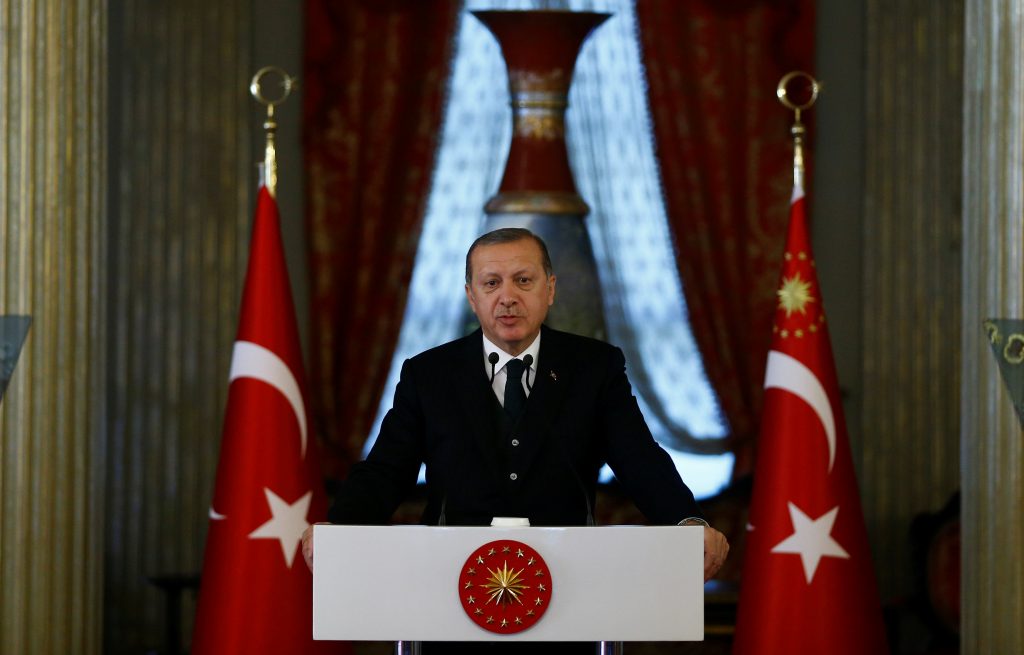 Turkish President Tayyip Erdogan showed no retreat from a diplomatic row with the United States on Saturday, castigating Washington for what he said was an “undemocratic” indictment against his security detail.

His comments may further dash hopes of a quick resolution to an ongoing diplomatic crisis between the NATO allies. Both Ankara and Washington have cut back issuing visas to each other’s citizens as ties have worsened.

“If arrest warrants are issued against my bodyguards in absentia … in the United States, where I went upon invitation, excuse me, but I will not say this is a civilized country.”

A U.S. grand jury in August indicted 15 Turkish security officials over a brawl between protesters and Erdogan’s security personnel during the Turkish president’s visit to Washington in May. Erdogan has said the indictment was not binding for Ankara.

The row deepened after Turkish authorities arrested two U.S. consular staff, both Turkish nationals. In May, a translator at the consulate in the southern province of Adana was arrested and two weeks ago a Drug Enforcement Administration (DEA) worker was detained in Istanbul.

Both are accused of links to last year’s failed coup. The U.S. embassy has said the accusations are baseless.

Turkish police want to question a third worker based in Istanbul. His wife and daughter were detained last week over alleged links to the network of U.S.-based cleric Fethullah Gulen, blamed by Ankara for orchestrating the abortive putsch. They were later released.

Turkey has been angered by what it sees as U.S. reluctance to hand over the cleric Gulen, who has lived in Pennsylvania since 1999. U.S. officials have said its courts require sufficient evidence to order his extradition.

Turkey has also been enraged by Washington’s support for the Syrian Kurdish YPG militia in the fight against Islamic State. Turkey regards the YPG as an extension of the outlawed Kurdistan Workers Party (PKK).

On Saturday, the U.S. embassy issued a statement reiterating its stance on the PKK and its jailed leader, Abdullah Ocalan, in an apparent response to criticism from Erdogan.

“The U.S. government works together with Turkey in the fight against terrorism and maintenance of stability in the region,” it said. “The PKK is listed among foreign terror organizations. Ocalan has been jailed in Turkey for his actions related to the PKK. He is not a person to be respected.”

On Friday, Erdogan criticized the United States over a huge banner of jailed Kurdish militant leader Abdullah Ocalan that was unfurled in Syria’s Raqqa by U.S.-backed Kurdish forces. The banner was raised at a ceremony to mark Raqqa’s capture from Islamic State in a campaign spearheaded by the YPG.

“How can the U.S. explain the poster of Ocalan in Raqqa? Is this the way they are cooperating with us in the struggle against terror?” Erdogan said. “You are not standing by us against terrorism.”

Ocalan has been in jail in Turkey since 1999 on a treason conviction. More than 40,000 people, most of them Kurds, have died in the fighting since the PKK took up arms against the state in 1984.

The PKK is considered a terrorist organization by the United States, Turkey and the European Union.