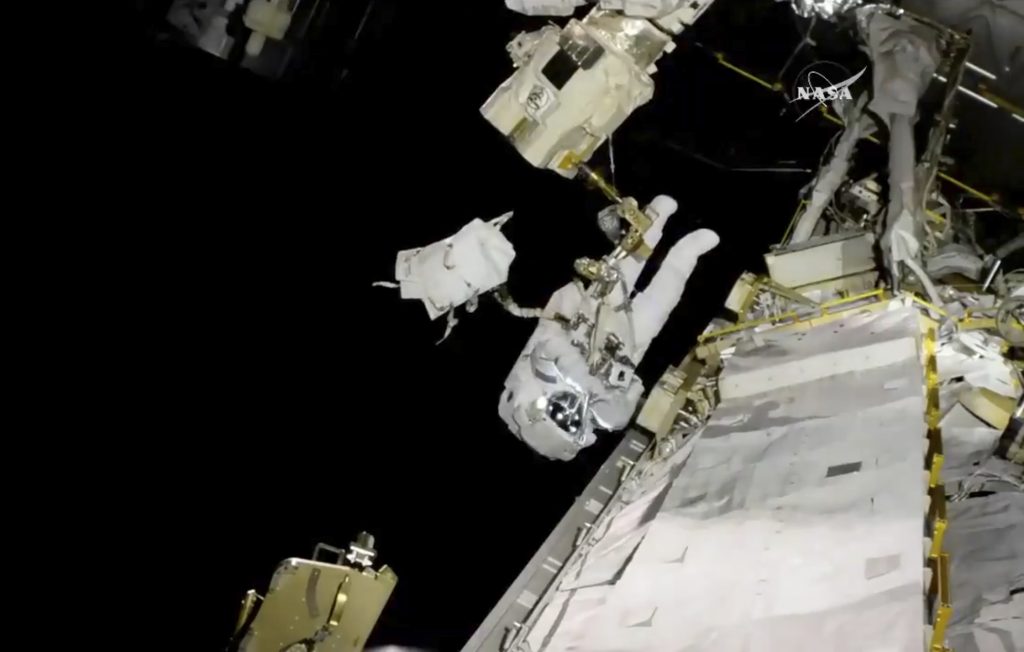 Astronaut Joe Acaba unbolted a blurry camera from a new robotic hand installed two weeks ago. He then popped in a spare, which flight controllers quickly tested from Houston. The replacement provided crisp, clear views.

Sharp focus is essential when the space station’s robot hand grabs an arriving supply ship and anchors it. The next delivery is a few weeks away, prompting the quick camera swap-out.

Orbital ATK, one of NASA’s commercial shippers, plans to launch a cargo ship from Virginia on Nov. 11.

Acaba and the station’s commander, Randy Bresnik, were supposed to go spacewalking earlier this week. But NASA needed extra time to add the camera repair to their chores.

This was the third spacewalk in two weeks for the space station’s U.S. residents. Bresnik performed the first two with Mark Vande Hei.

Acaba was barely outside an hour when he had to replace one of his safety tethers, which keep him secured to the orbiting outpost and prevent him from floating away. Mission Control noticed that his red tether seemed frayed and worn. Bresnik went to get him a spare. Spacewalking astronauts always have more than one of these crucial lifelines in case one breaks. They also wear a jetpack in case all tethers fail and they need to fly back to the space station.

Later in the spacewalk, the right hand controller on Acaba’s jetpack popped out unexpectedly — more than once — and Bresnik had to help him with that as well.

Friday’s spacewalk — expected to be the last one for the year — also saw the astronauts lubricating the new robotic hand, installing a high-definition camera, replacing a fuse and removing thermal insulation from spare electronics. Early next year, astronauts will replace the hand on the opposite side of the 58-foot robot arm, Canada’s main contribution to the space station. The original latching mechanisms are showing wear and tear since the arm’s launch in 2001.

The 250-mile-high complex is currently home to three Americans, two Russians and one Italian.

A one-time teacher, Acaba is the first astronaut of Puerto Rican heritage – his parents were born there. He ventured out on Friday’s spacewalk as the station soared above the hurricane-ravaged island, where much of his extended family lives.

“There’s a whole line of people looking up and smiling today as you get ready to head out the door,” Bresnik told him.