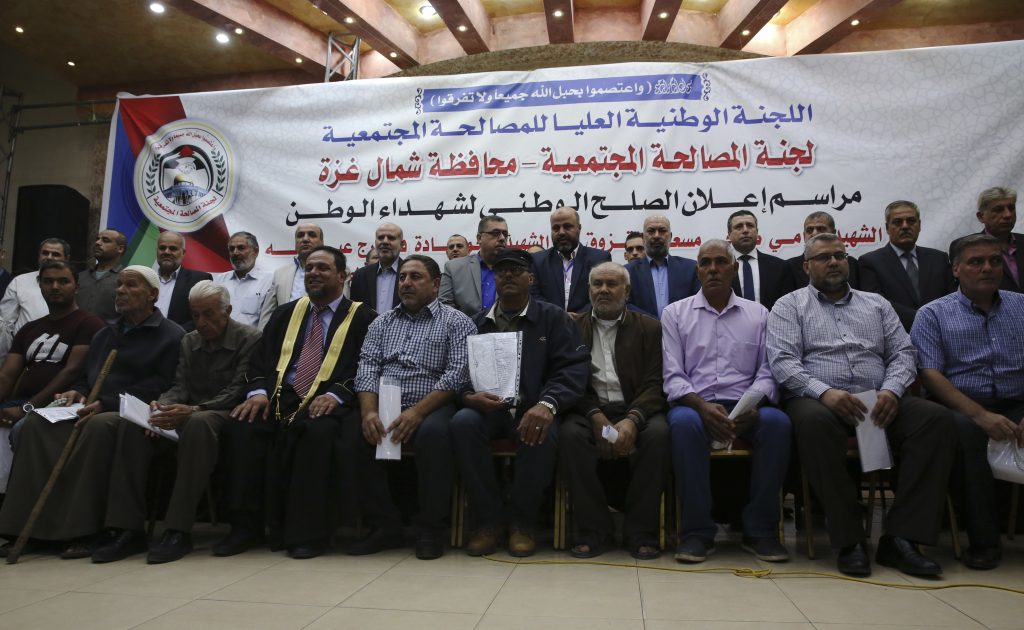 As the rival Palestinian factions Fatah and Hamas begin to reconcile, families of loved ones killed in Gaza’s civil war a decade ago are also learning to get along.

With the backing of an exiled former Palestinian security chief, grieving families are agreeing to drop their 10-year-old blood feuds in exchange for $50,000 payments.

The idea is to help Gaza move beyond one of its darkest chapters — the week-long round of internecine fighting that ended with Hamas’ takeover of the territory in 2007. More than 700 Palestinians were killed in the infighting between the Fatah and Hamas factions, which was characterized by pitched gun battles on Gaza’s streets and scenes of people being thrown off the rooftops of high-rise buildings.

The project is also giving Mohammed Dahlan, the former Gaza intelligence chief, his most direct involvement in Palestinian affairs since he was forced into exile in 2010 by Palestinian Authority President Mahmoud Abbas.

In this society, family feuds are perhaps the biggest threat to the social fabric. Organizers hope that working at the local level can help on the broader political level as well.

When Khalil al-Anqah, a new recruit in the Hamas police force, was killed by a roadside bomb in 2007, Hamas blamed Fatah for the explosion and his family vowed to retaliate.

But recently, the family dropped its plan to avenge his death. They were among hundreds of people who attended a reconciliation ceremony held at a wedding hall in the northern Gaza town of Beit Lahiya.

After a reading from the Quran and speeches by local officials, a representative from each family was called to the stage, shook hands with officials and received a check.

Ismail al-Anqah, Khalil’s brother, said agreeing to move on would have been difficult at the time of the explosion.

“The blood was still warm, but time relieves and reduces pain,” he said, calling the compensation agreement bittersweet.

Khalil was married and had two children who have grown up without a father.

“We will spend this sum that we got for reconciliation for the benefit of the martyr’s children,” he said. “I hope these incidents will not happen again and the families will not suffer like our suffering.”

Hundreds of families have similar stories.

In November 2007, Tariq al-Najjar, a Fatah security officer, was among seven people killed in clashes that erupted when Fatah tried to hold a political rally.

Nearly a decade later, his mother, Um Mohammed, is still shedding tears. But the family accepted the compensation in the name of Palestinian unity.

“God bless them, all of them,” she said about Hamas and Fatah. “All of them are our sons.”

The family is planning to buy a house for Tariq’s widowed wife and two children. “We forgive the past for the sake of reconciliation,” said Tariq’s brother, Mohammed.

Not all families have agreed to cooperate. Some, invoking Islamic law, are still demanding that the killers of their loved ones be put to death. Members of the committee that distributes the checks said they will intensify pressure on these families to accept blood money later.

The project has given Dahlan a high-profile role in Gaza. As security chief, Dahlan was a feared and reviled figure in Gaza who was forced to flee to Abbas’ West Bank base after the Hamas takeover. Three years later, he had a falling out with the Palestinian president and was forced to leave there as well.

Exiled to the United Arab Emirates, Dahlan has forged good relations with Egypt and the Gulf governments and is angling for a comeback in the Palestinian territories.

Abu Shamallah, the Dahlan loyalist, said a fund of $50 million financed by donations from Dahlan’s wealthy UAE sponsors has been created for the compensations, enough for roughly 725 families who lost loved ones, as well as people badly wounded or disabled in the fighting.

When Dahlan’s name was mentioned during speeches at the recent ceremony, the hall erupted in applause.

Dahlan’s efforts are independent of the reconciliation process going on between Fatah and Hamas. Under Egyptian mediation, the rivals have announced a preliminary agreement but still need to work out key details, such as who will control Hamas’ vast weapons arsenal. Abbas detests Dahlan and has rejected any political comeback by his nemesis.

In the meantime, Dahlan has also been spreading his influence by supporting projects for jobless workers, students and medical patients.

Abu Shamalla said Dahlan will run independently in future elections to challenge Abbas if the Palestinian leader tries to block his political comeback.

“We will try our attempts to unify Fatah, but if we cannot, we will go the elections” route, he said.