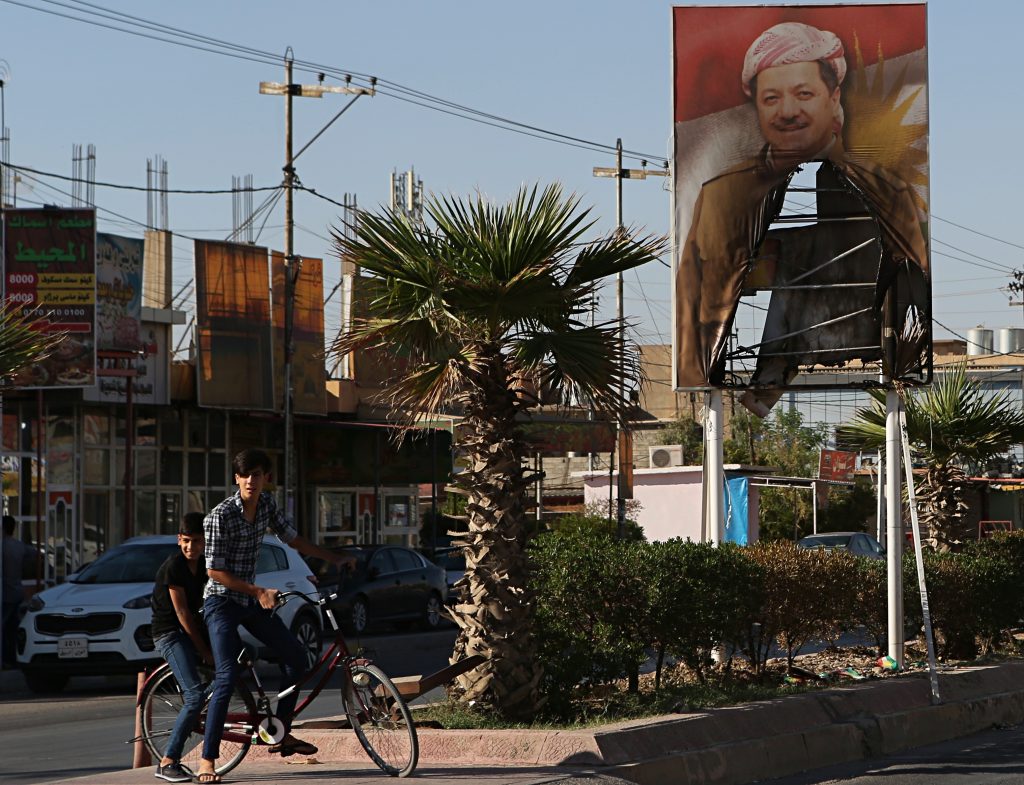 A Baghdad court issued an arrest warrant for the vice president of Iraq’s autonomous northern Kurdish region on Thursday for saying that Iraqi forces had “occupied” the disputed province of Kirkuk this week.

However, the warrant against Kosrat Rasul is unlikely to be executed as the central government in Baghdad has no enforceable authority in the Kurdish-administered north.

The court accused Rasul of “insulting” Iraq’s armed forces, which is forbidden by Iraqi law.

On Monday, Iraq’s federal forces, supported by Iranian-sponsored militias, rolled into the oil-rich city of Kirkuk, forcing Kurdish terrorists, known as the peshmerga, to withdraw after brief clashes.

The Kurds took over the city in 2014 when Iraq’s army melted away ahead of the Islamic State’s blitz across northern and western Iraq.

IS has since seen its hold on Iraq and north Syria crumble in the face of relentless airstrikes by the U.S.-led coalition and an array of forces battling it on the ground. At its peak, it held a third of both countries.

In Kirkuk, residents were coming to terms on Thursday with the handover of the city back to Baghdad authorities. Many felt the two leading Iraqi Kurdish parties had betrayed their people and had ordered the peshmerga to pull back with hardly a fight.

Jumaa Khalaf said she felt “humiliated” by the two parties over the withdrawal.

“They trampled on the dignity of the peshmerga,” she said.

Many Kurds are wary of the Shiite-led militias that helped Iraqi forces retake the city. The Popular Mobilization Forces, as they are known, are predominantly Shiite and backed by Iran, and seen by Kurds as agents of Arab- and Shiite-first policy.

PMF commanders held a press conference from the center of Kirkuk on Wednesday, despite orders from Baghdad not to enter the city, further provoking fears of ethnic strife.

On Thursday, Associated Press reporters saw only a handful of PMF vehicles among a dominantly federal police and security presence inside Kirkuk.

Another Kurdish resident, Hassan Anwar, said he was disturbed to see photos of Iraqi Kurdish leader Masoud Barzani burned in the city. “I feel like it’s my father’s photo that’s been burnt,” he said.

The Kurds make up a portion of the multi-ethnic Kirkuk’s 1.2 million residents, living among Arabs and Turkmen.

Brig. Gen. Yahya Rasool, spokesman for Iraq’s armed forces, said the military would redeploy to all areas it controlled before the rise of IS.

The Kurds have already withdrawn from most areas in northern and eastern Iraq that they took during the war against the jihadis. In the battle against IS, the Kurdish forces fought on the same side as the Iraqi military and the PMF. Both the Kurds and Iraq’s central government are military allies of the United States.

On Thursday, tensions ran high along the main road between the Kurdish regional capital, Irbil, and Kirkuk. Peshmerga fighters on Wednesday took up positions about 5 kilometers (3 miles) beyond their initial lines, regrouping to defend the town of Altun Kupri. Iraqi forces established their own positions about 1.6 kilometers (1 mile) away.

Brig. Gen. Raad Baddai said the town would be “the last area” his forces will retake north of Kirkuk. He told the AP that his forces were awaiting orders to enter the town “in the coming hours,” raising the possibility of clashes with the Kurdish forces still inside Altun Kupri.

The town falls just outside the boundary of the Iraqi Kurdish autonomous zone. Kurdish forces moved into it in 2014.

This week’s pullout from Kirkuk and several other towns and villages the peshmerga held is likely to deprive the Kurdish regional government of a substantial revenue stream.

The Kirkuk oil field surrounding the city was estimated in 2007 to hold almost 9 billion barrels of oil. Iraq’s Oil Ministry said it has asked British Petroleum to develop plans to expand production at the field “as quickly as possible.”

Rasool, the Iraqi military spokesman, said Thursday that the military had no plans to capture the nearby Khurmala oil field, which is located inside the Kurdish region. Its reserves are estimated at 2.8 billion barrels.