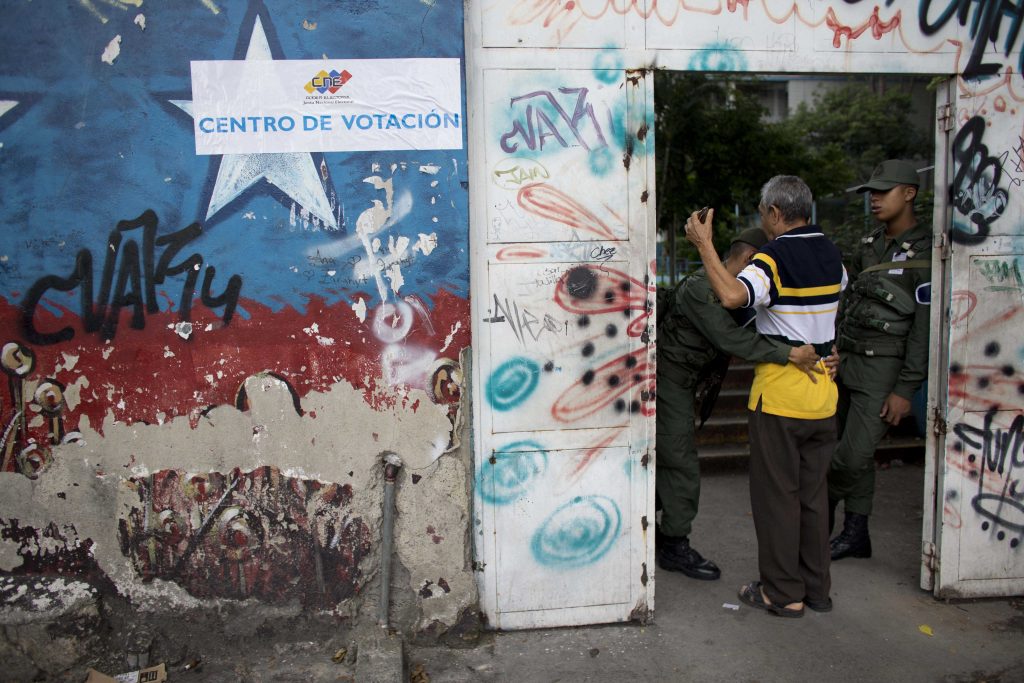 Voting sites were shifted to distant neighborhoods with rampant crime. Ballots featured the faces of opposition candidates who lost in primaries. The government-stacked National Electoral Council denied monitoring accreditation to one of Venezuela’s most important independent observers.

The opposition pointed on Monday to those irregularities and others that began the moment regional elections were called to explain a staggering loss in gubernatorial contests it had expected to win in Sunday’s voting.

“We encountered an absolutely fraudulent system,” said Carlos Ocariz, the opposition’s candidate in Miranda, the nation’s second most populous state where the candidate of the ruling socialist party won.

Opposition leaders vowed to contest the vote and called for protests, though there was no sign of the mass anti-government demonstrations that wracked Venezuela this year.

National Electoral Council officials stood by the results, showing that socialist candidates won at least 17 of the country’s 23 governorships despite widespread anger over a crumbling economy where triple-digit inflation, soaring crime, and food and medicine shortages make life a daily struggle for many Venezuelans.

Socialist party leader Diosdado Cabello said that if the opposition has proof of fraud, they should share it.

The contentious election threatened to further divide this already polarized nation and throw the strained opposition into deeper disarray. Some worried that the election loss might strengthen the more radical elements of the opposition and jeopardize chances for a negotiated solution to the political conflict.

At least one of the losing opposition candidates accepted the results.

“We lost. We have to accept it,” said Henri Falcon, a one-time socialist party politician who in recent years joined the opposition and lost his re-election bid as governor of Lara state. The official vote count said he trailed ruling party candidate Carmen Melendez by 18 points in the northern state.

Even before the election, the opposition was struggling against apathy and disillusionment among Venezuelans, though the official turnout figure of 61 percent seemed to indicate that many people did vote.

“There is a lot of frustration,” said Luis Vicente Leon, president of Datanalsis, a Caracas-based polling agency. “They (the opposition) are going to be divided between those who believe there was massive fraud, others who think it’s the fault of the leadership, and some who believe ‘chavismo’ has come back.”

That was certainly the ruling party’s conclusion, claiming that the victory was a profound endorsement for the socialist ideals installed by the late President Hugo Chavez nearly two decades ago.

“Chavismo is more alive than ever,” said Hector Rodriguez, who defeated Ocariz in the Miranda governor’s contest.

Leaders with the opposition’s main alliance pledged Monday evening, nearly 24 hours later, not to recognize the results until an independent, internationally verified audit is complete.

Angel Oropeda, a political coordinator for the opposition, said the election was ripe with irregularities. More than 1 million Venezuelans had difficulty voting because of issues like delays in the opening of polling sites and damaged machines, he said. At least 90,000 votes that should have gone to the opposition did not because election officials refused to remove from ballots candidates who lost in a September primary, he added.

“The regime chose the path of fraud,” he said.

The U.S. State Department denounced many of the same irregularities, promising to wield the “full weight” of U.S. diplomatic and economic power in support of the Venezuelan people. The Trump administration has sanctioned dozens of Venezuelan leaders and prohibited U.S. banks from issuing new credit to the Maduro government.

If there were irregularities in the vote count itself, Luis Lander, director of the independent Venezuelan Electoral Observatory, said the first place to look for evidence would be the thousands of cardboard boxes containing paper printouts showing exactly how each person voted at the electronic voting machines.

But any impact on the vote caused by moves like relocating voting sites would be more difficult to measure.

“Of course it has an impact,” Lander said. “But how much is hard to know.”

Results for individual races published on the electoral council’s website showed that even including votes that went to no-longer-running opposition candidates who remained on the ballot wouldn’t have significantly changed results.

David Smilde, a Tulane University professor and expert on Venezuela, said that despite whatever irregularities might have taken place, the results also show many Venezuelans are not ready to vote for the opposition.

“Maybe the government is quite unpopular,” he said. “But I think there’s a good percentage of people out there that feel ‘chavista.'”

Representatives with the Council of Latin American Electoral Experts, an international body that observed the vote but did not have access to the same data as a traditional independent observer, said the vote had proceeded normally. Some opposition members have previously criticized the council as being partial toward the government.

A defiant Cabello suggested the opposition might now turn inward.