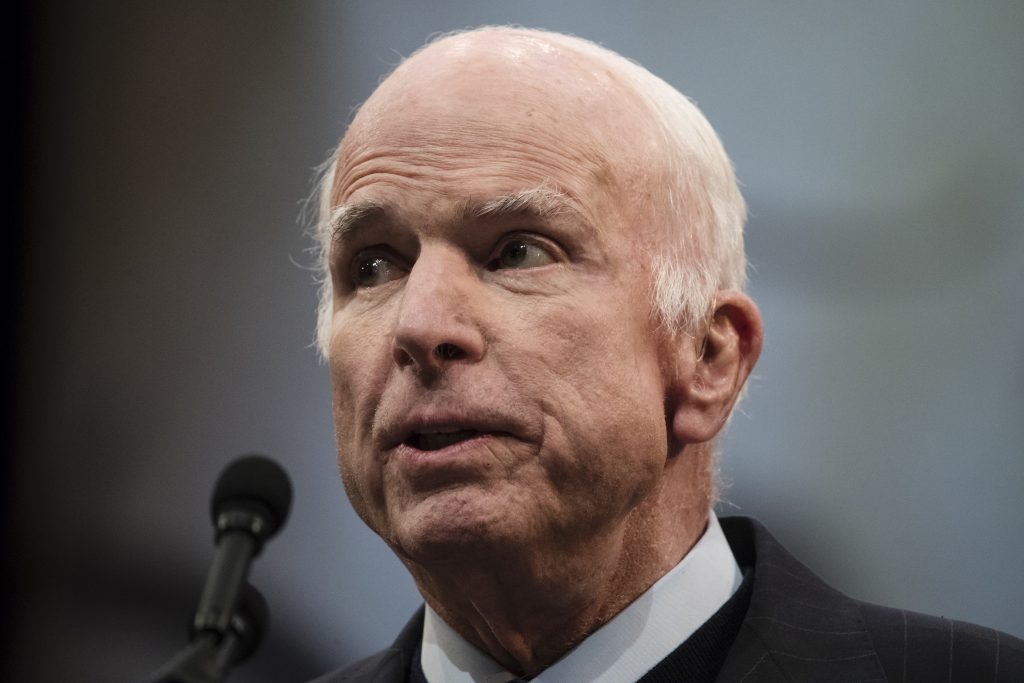 President Donald Trump on Tuesday issued a warning shot after Republican Sen. John McCain questioned “half-baked, spurious nationalism” in America’s foreign policy, saying that “people have to be careful because at some point I fight back.”

McCain, a former Navy pilot who spent 5½ years in a Vietnam prisoner of war camp and is battling brain cancer, offered a simple response to Trump: “I have faced tougher adversaries.”

Trump said in a radio interview with WMAL in Washington, “I’m being very, very nice, but at some point I fight back and it won’t be pretty.” He bemoaned McCain’s decisive vote this past summer in opposition to a GOP bill to dismantle Barack Obama’s Affordable Care Act, a move that caused the failure of GOP efforts to repeal and replace “Obamacare.”

In Philadelphia on Monday night, the six-term Republican senator from Arizona received an award for a lifetime of service and sacrifice to the country. In addition to recalling his more than two decades of military service and his imprisonment during the war, McCain took a moment to go a step further than the night’s other speakers, who lamented what many described as a fractured political climate.

“To abandon the ideals we have advanced around the globe, to refuse the obligations of international leadership for the sake of some half-baked, spurious nationalism cooked up by people who would rather find scapegoats than solve problems,” he said, “is as unpatriotic as an attachment to any other tired dogma of the past that Americans consigned to the ash heap of history.”

He continued, “We live in a land made of ideals, not blood and soil.”

Former Vice President Joe Biden presented McCain with the Liberty Medal. Though members of opposing parties, the two men worked together during their time in the Senate. Former President Barack Obama, who defeated McCain in his bid for the presidency in 2008, congratulated the senator on the award in a tweet Monday night.

“I’m grateful to @SenJohnMcCain for his lifetime of service to our country. Congratulations, John, on receiving this year’s Liberty Medal,” Obama wrote.

Another political foe, 2012 GOP presidential nominee Mitt Romney, said on Twitter, “Ran against him, sometimes disagree, but proud to be a friend of @SenJohnMcCain: hero, champion of character and last night, Lincolnesque.”

Pressed on Trump’s threat Tuesday morning, McCain told reporters he has had tougher fights, and then smiled.

Trump said in the radio interview that McCain’s vote against Republican efforts to dismantle the 2010 health-care law was a “shocker.”

McCain and Trump have long been at odds. During the campaign, Trump suggested McCain was not a war hero because he was captured in Vietnam.