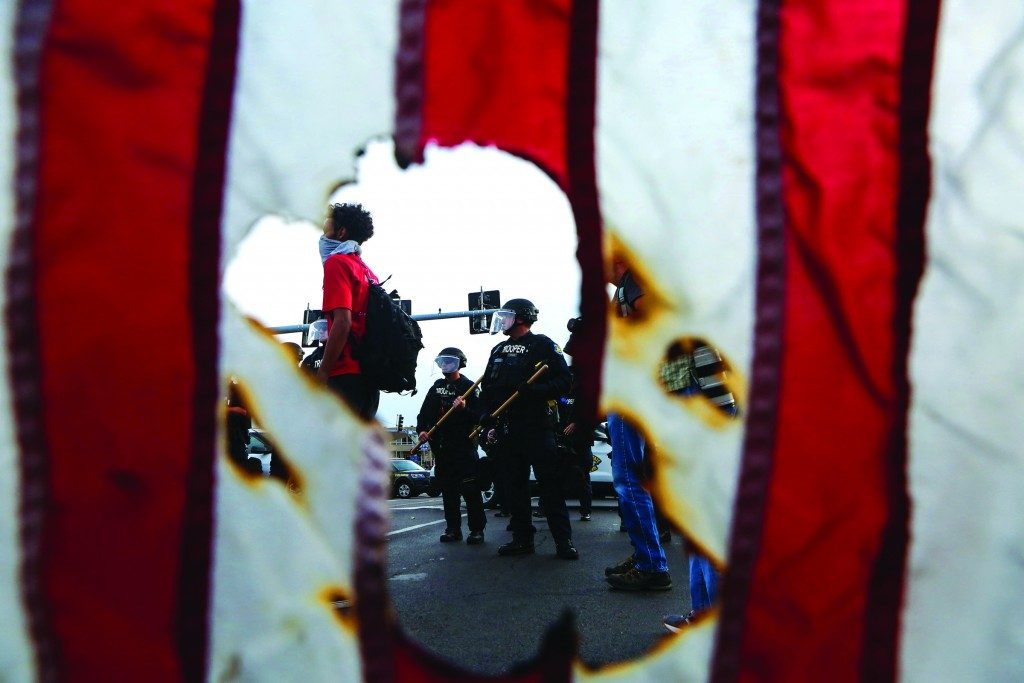 The rioting last month in St. Louis following the acquittal of a white former police officer who killed an African-American man, like all rioting in the wake of unpopular verdicts, was ugly and unjustifiable. While the majority of protesters were peaceful, some hoodlums broke store windows and threw rocks at police.

The city’s acting police chief, Lawrence O’Toole, came under fire for stating, after calm was restored, “I’m proud to tell you the City of St. Louis is safe, and the police owned tonight.” Georgetown law professor Paul Butler retorted that if “the police actually are in charge, if they actually own the night, that’s a police state, not a free country.”

He’s wrong. Empowered police are essential to a free country.

The Mishnah (Avos 3:2) teaches that governments are what prevent anarchy, and thus deserve our tefillos. And law enforcement officers are the front line of maintaining the peace.

What spurred the largely peaceful protests, though, shouldn’t escape our attention.

The police officer acquitted of murder, Jason Stockley, and his partner chased a suspected criminal, Anthony Smith, who had fled in a car. The officers slammed their SUV into the suspect’s car. Officer Stockley got out and fired five shots, killing the suspect. A handgun was taken from the car after the shooting.

The police vehicle’s dashboard camera, however, shortly before the chase ended, captured Mr. Stockley seeming to say that he was “going to kill this [expletive].” At trial, the officer said he could not remember saying that.

Prosecutors also argued that the presence of Mr. Stockley’s DNA — and the absence of Mr. Smith’s — on the retrieved gun proved that Mr. Stockley planted the weapon on the suspect’s person. (More than 40 criminal cases have been dropped in Baltimore alone after police body cameras showed officers there allegedly planting evidence.)

The judge, though, noted the lack of any direct evidence of wrongdoing; cited court testimony that the absence of someone’s DNA on a gun is not conclusive; and opined that for a person engaged in criminal activity to “not [be] in possession of a firearm would be an anomaly.”

I won’t second-guess the judge. He heard all the testimony and saw all the evidence, and I didn’t. But it’s understandable why the outward facts of the case led some in St. Louis to voice their displeasure.

Police officers facing criminals they believe are armed need to make split-second decisions, and cannot be expected to pause to meditate on their situation. Still and all, police misconduct happens.

Like it did in the bloodless but still deeply disturbing case of Fred Watson, who was sitting in his car in a Ferguson, Missouri park in 2012 when a police officer approached, searched the man’s car without permission and wrote him more than half a dozen tickets. Among them was one for not wearing a seatbelt, even though the car was parked; and one for offering a false report — because Mr. Watson identified himself as “Fred” instead of the “Freddie” on his license.

Mr. Watson, a Navy veteran and cybersecurity expert, is black. According to his account, when he protested the citations, the white officer pulled out his gun and told him: “I could just shoot you right here and no one would” care.

A case of “he said, he said”? Maybe. But the officer’s record shows that he pistol-whipped a 12-year-old girl in the face in 2006, and in 2007 struck a child in the face with something metal before falsifying a police report.

Meanwhile, Mr. Watson said that the city’s five-year-long prosecution caused him to lose his security clearance, resulting in his being fired from his well-paying cybersecurity job. Last month, without explanation, Ferguson prosecutors dropped all charges. Better late than never.

It isn’t always white on black mistreatment, either. This past July, a black police officer in Coney Island ordered a white man, Raymond Crespo, to pick up a cup his friend had knocked from his hand. When Mr. Crespo didn’t, the officer threw him against a door and then threw him down and dragged him along the ground — all captured by a surveillance camera. Mr. Crespo filed a complaint.

The next day, Mr. Crespo says, the officer, in plainclothes, sought him out, asked him why he had made the complaint and, revealing a gun in his waistband, said, “Do you know what I’m going to do to you?”

There is no inconsistency in both wholeheartedly supporting police and being deeply distressed by police misconduct. Quite the contrary, for those of us who truly value the dedication of law enforcement personnel, the irresponsible yechidim in their ranks are all the more loathsome, for they only sully the good reputation of the vast majority of police, unfairly but surely.