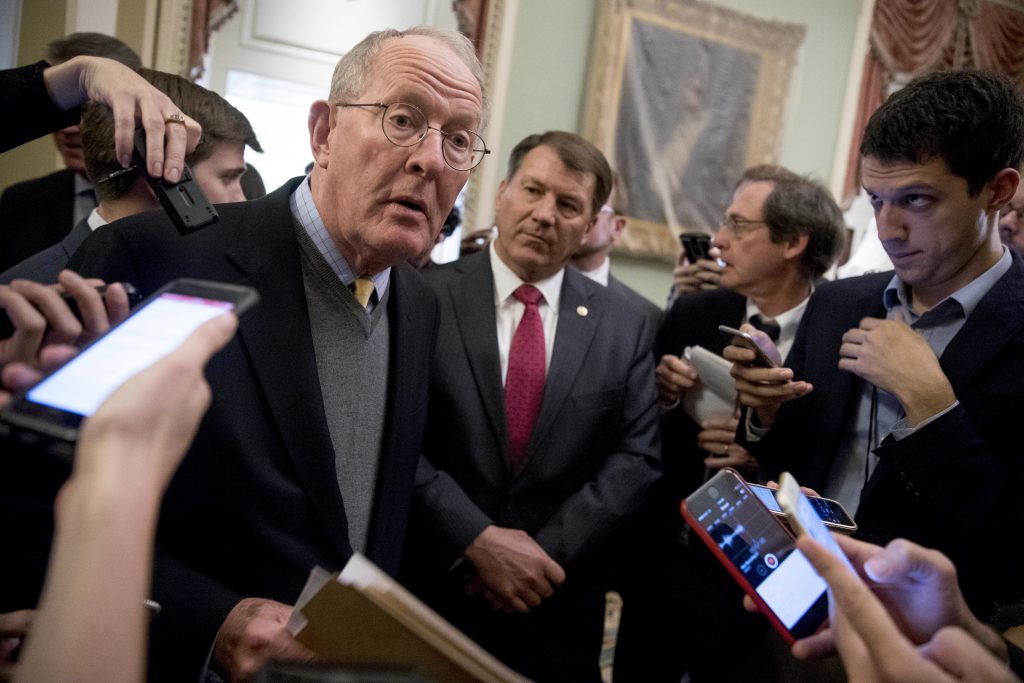 Key senators reached a breakthrough deal Tuesday on resuming federal payments to health insurers that President Donald Trump has blocked. Insurers had warned that unless the money is quickly restored, premiums will go up.

At the White House, the president spoke favorably about the bipartisan compromise, which is still likely to face opposition in Congress.

The agreement would involve a two-year extension of federal payments to insurers that Trump halted last week, said Sen. Lamar Alexander, R-Tenn. Unless the money is quickly restored, insurers and others say that will result in higher premiums for people buying individual policies and in some carriers leaving unprofitable markets.

Alexander and Sen. Patty Murray, D-Wash., have been working for weeks on health-care legislation, separate from repeated and unsuccessful efforts by GOP leaders to dismantle Barack Obama’s Affordable Care Act.

Emerging from a closed-door GOP luncheon on Tuesday, Alexander said, “Senator (Patty) Murray and I have an agreement,” and added that Trump has encouraged them, and that the “president likes this idea.”

While the agreement is a breakthrough, they still need to secure the support of fellow Republicans and Democrats. Majority Leader Mitch McConnell, R-Ky., was noncommittal while Minority Leader Chuck Schumer, D-N.Y., welcomed the agreement as a step forward that will provide stability for insurance markets in the short-term.

Murray hailed the bipartisan effort, saying that “when Republicans and Democrats take the time … we can truly get things done” for the American people.

In brief comments at the White House, Trump offered support.

“It is a short-term solution so we don’t have this very dangerous little period,” the president said.

Murray and Alexander began talks on extending the payments months ago, when Trump was frequently threatening to stop the subsidies. Both had said they were close to a deal, but GOP leaders shut the effort down in September when the Senate revisited the Republican drive to repeal Obama’s law. The repeal effort failed, as did an earlier GOP attempt to dismantle the law in July.

Trump’s halt of the payments and worries about its impact have galvanized lawmakers in both parties to take action to prevent it.

Even so, strong opposition by some conservatives means the congressional fate of a compromise would be uncertain. For their part, Democrats believe Republicans in control of Washington will be blamed by voters for future health care problems and are reluctant to bend too far toward GOP demands for opening loopholes in Obama’s law.

Alexander said Trump has twice in recent days urged him to reach a deal with Murray.

“He says he doesn’t want people to be hurt in this interim,” said Alexander, a reference to Trump’s desire to revisit the effort to scrap Obama’s statute next year.

Trump repeated his gloomy assessment of a law that’s expanded health coverage to 20 million people and required insurers to cover specified services and limit costs, but has also seen premiums rise and limited competition in some regions.

“Obamacare is virtually dead. At best you could say it’s in its final legs. The premiums are going through the roof. The deductibles are so high that people don’t get to use it. Obamacare is a disgrace to our nation, and we are solving the problem of Obamacare,” he told reporters in the Oval Office.

Senate Minority Leader Chuck Schumer, D-N.Y., said Trump’s stoppage of the payments “showed that he’s willing to take a wrecking ball to our nation’s health care for the sake of politics.” He said congressional support for an agreement between Alexander and Murray would show that lawmakers have “no intention of going along with President Trump’s reckless sabotage of the nation’s health-care law.”

Under Obama’s 2010 overhaul, the government must pay insurers for reducing out-of-pocket expenses for lower-earning customers.

A federal judge has ruled that Congress hadn’t legally approved the payments, but Obama — and initially Trump — continued them anyway. Trump halted them last week, even though by law insurers must continue reducing costs for lower-income consumers.

The so-called cost-sharing reductions cost around $7 billion this year and lower expenses like co-payments and deductibles for more than 6 million people.