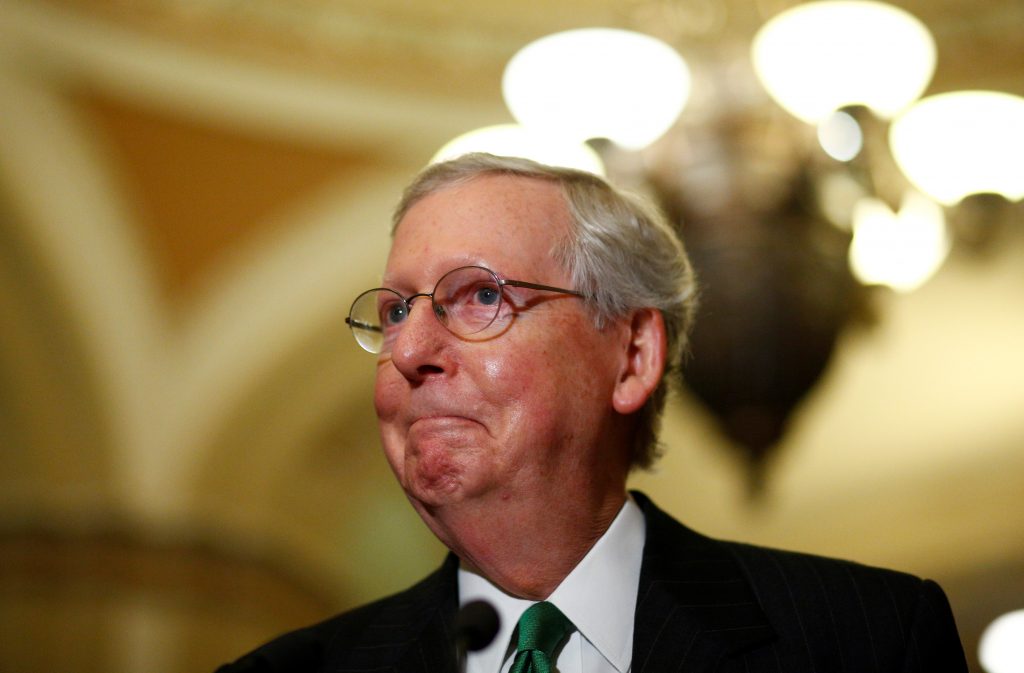 The Senate is moving ahead on a Republican budget plan, a critical step in President Donald Trump and the party’s politically imperative drive to cut taxes and simplify the IRS code.

The nonbinding budget plan would permit Republicans to pass follow-up tax cuts later this year that would cost up to $1.5 trillion over the coming decade. The plan cleared a procedural hurdle in the Senate on a party-line vote of 50-47.

The plan breaks with longstanding promises by top Republicans like Senate Majority Leader Mitch McConnell and Speaker Paul Ryan that the upcoming tax drive won’t add to the nation’s $20 trillion debt. Once the budget plan passes through the GOP-controlled Congress, the House and Senate can then advance a follow-up tax overhaul measure without fear of a filibuster by Senate Democrats.

“It is crucial that Congress approve this fiscal framework in order to eliminate the dated and stifling tax policies that are holding back our nation,” said Budget Committee Chairman Mike Enzi, R-Wyo.

The budget plan calls for $5 trillion in spending cuts over the decade, including cuts to Medicare, Medicaid, and the Obama-era health-care law, though Republicans have no plans to actually impose those cuts with follow-up legislation.

Tuesday’s vote sets up a vote later this week to pass the budget. That vote is likely to be close, but key GOP moderates such as Susan Collins of Maine and Lisa Murkowski of Alaska have signaled support. Rand Paul, R-Ky., is so far opposed.

Trump and his GOP allies plan to use the $1.5 trillion in tax cuts to sharply reduce corporate rates, cut taxes for most individuals, and slash taxes on business partnerships such as law firms, medical practices, and accounting firms. After failing to deliver on their promise to “repeal and replace” the health-care law, Republicans fear that failure to deliver on taxes would be a political disaster.

The spending cuts in the measure include $473 billion from Medicare and more than $1 trillion from Medicaid. Although the budget plan is nonbinding, it puts Republicans and Democrats on record about its policies.

If the measure’s politically difficult cuts were implemented, the budget deficit would drop to $424 billion after 10 years and average about $540 billion a year over the life of the plan, the Congressional Budget Office estimates.

Republicans use different math, relying on optimistic predictions of economic growth that average 2.6 percent a year, while ignoring growing, chronic deficits run by Social Security to claim that their budget could actually generate a surplus by 2026.

“The Budget Committee expects that enactment of pro-growth policies could generate sufficient economic growth to offset” the $1.5 trillion tax cut, according to the panel’s budget report.

Even most economists sympathetic to arguments that tax cuts boost the economy don’t claim they fully pay for themselves, however.

“A good estimate for real-world tax policy is somewhere around 25-30 cents on the dollar,” said GOP economist Douglas Holtz-Eakin.

The bare-bones tax blueprint issued last month by Trump and Republican leaders lacks critical details, and two of the Democrats said it was premature to consider compromises.

There was “lots of talk” about the tax plan, Heitkamp said on Tuesday, but “I still don’t know what it is.”

McCaskill said, “It’s very difficult to discuss what, if anything, we could agree to if they don’t have a plan.”

Full details on the plan as it is turned into legislation may not emerge publicly until next month, Sen. Charles Grassley, an Iowa Republican who sits on the tax-writing Senate Finance Committee, said Tuesday.

“More details sometime in November,” he told reporters in Iowa. Grassley noted that the administration wants legislation to pass Congress and go to Trump for his signature by Thanksgiving.