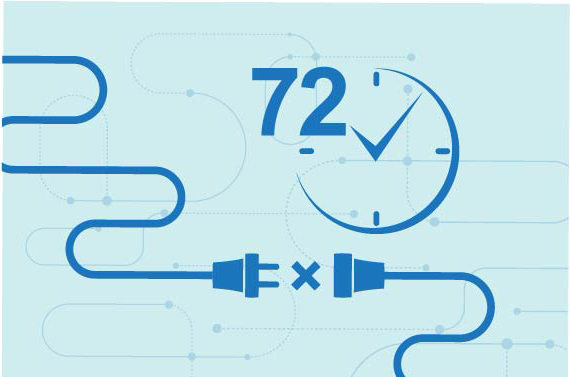 As is the case each time Rosh Hashanah falls on a Thursday, which is hardly an infrequent occurrence, the Jews of the Diaspora repeatedly celebrated in recent weeks what is generally referred to as a “three-day Yom Tov,” as two days of Yom Tov continued right into Shabbos.

For three times in less than a month, the mitzvah of Eruv Tavshilin was performed, and thanks to tireless efforts of balabustes in homes the world over, six (or seven, if one counts shalosh seudos) consecutive elevated seudos were prepared and enjoyed. By the time Friday night arrived, food was being consumed not out of an abundance of appetite but solely in honor of the Shabbos.

In contemporary times, the reality of a “three-day Yom Tov” has also taken on a meaning that was unknown to our ancestors.

“It was both a liberating and humbling experience,” was how one Brooklyn businessman described the experience of repeatedly being without a smartphone for more than 72 consecutive hours.

“The ‘liberating’ part was the exhilarating sense of freedom that I was counting on,” he related in a conversation with Hamodia. “But what was surprising to me, and rather humbling, was just how well everyone managed without me for three full days, two of which were regular business days … Most of the emails that I receive are from people outside the Jewish community, and while some of them probably knew when Rosh Hashanah was, they likely never heard of Sukkos or Shemini Atzeres. I had even forgotten to set up an automatic reply explaining that I would be out. But, somehow, emails that I ordinarily would have assumed are so urgent that they must be dealt with at once — regardless of whether I was in shul, at the supper table, on a long-planned family vacation, or at a simchah — waited patiently for me for three days. …”

Another, younger member of the community, who says he mostly uses his device for social media purposes, reported feeling “out of whack” for much of Yom Tov.

“The first 26 hours was very bearable, as I am used to being disconnected on Shabbos. But once I entered the second day of Yom Tov, I started feeling very lost and out of touch. …”

Referring to a 2012 study by Dr. David Pelcovitz that found that 18 percent of survey respondents reported texting on Shabbos or engaging in what they termed “half Shabbos,” Dr. Shapiro pointed out, “That was in 2012. I have to imagine that the number is higher today, as the rate of teen cell-phone ownership has increased. While the study population was of students attending Modern Orthodox day schools, when I have spoken in yeshivah communities I have been informed that it seems to be an issue there as well. …

“It is remarkable to think that the drive to text on Shabbos is so strong that individuals whose espoused values are to be shomrei Torah umitzvos have such difficulty refraining from this,” he added. “It really underscores how psychologically dependent individuals can become on their technology and how unhealthy their relationship with technology can get.”

A recent article in The Wall Street Journal ran with the striking headline “How Smartphones Hijack Our Minds.”

Citing the finding of one pair of scholars, the WSJ article pointed out that “smartphones have become so entangled with our existence that, even when we’re not peering or pawing at them, they tug at our attention, diverting precious cognitive resources. Just suppressing the desire to check our phone, which we do routinely and subconsciously throughout the day, can debilitate our thinking.”

The article, written by Nicholas Carr, ends on a very telling note:

“Upgrading our gadgets won’t solve the problem. We need to give our minds more room to think. And that means putting some distance between ourselves and our phones.”

As Torah Jews, our worries about the ramifications of the rampant misuse of technology include all the concerns raised by secular researchers and much, much more.

Within our community, there is an increasing call for re-evaluating our relationships with these devices and taking back control of our own lives. An ever-increasing number of individuals, in many cases heeding the call of their spiritual mentors, have sought to replace their smartphones with flip phones and use, as needed, small laptops or tablets to check their email messages. In the process, they have found a dramatic decrease in the number of times a day that they check their phones and, as a result, saw a significant improvement in their level of productivity at work and their quality of life at home.

As the month of Tishrei, a lofty time of spiritual rejuvenation, draws to a close, this is an ideal time to reflect on how well we dealt with a “three-day Yom Tov” and drew from it all the right lessons.