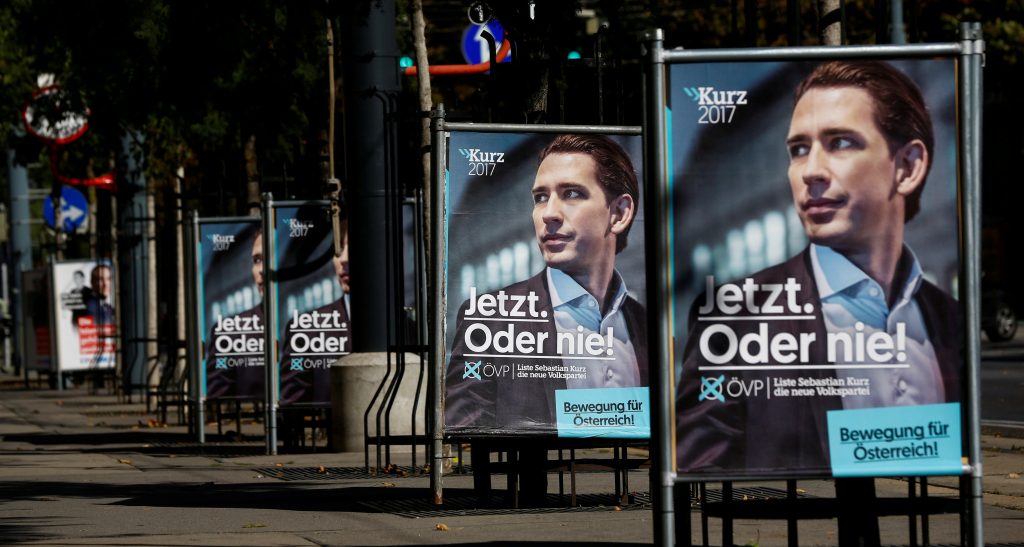 Right-wing parties chalked up two more victories in Europe over the weekend, coming second in Austria’s national election and entering another state parliament in Germany, putting further pressure on mainstream conservatives to take a harder line on immigration.

The issue has been at the forefront of European politics since 2015, with the influx of more than two million migrants fueling voters’ fears of unrestricted immigration.

Populist politicians across Europe have seized on the issue to warn that migrants from Africa, Asia and the Middle East could undermine Europe’s way of life.

The strategy has paid off at the polls, boosting backers of Britain’s move to leave the European Union and helping put a far-right candidate into the final round of France’s presidential elections.

On Sunday, the right-wing Freedom Party received more than a quarter of the vote in Austria’s parliamentary elections, putting it in a strong position to join the next government. Party leader Heinz-Christian Strache has described people fleeing wars in Syria, Iraq and Afghanistan as “invaders,” and claimed earlier this year that Muslim immigrants create “no-go areas” wherever they settle.

Ahead of the Austrian election, the leader of Austria’s centrist People’s Party, Sebastian Kurz, adopted the Freedom Party’s stance on immigration in a bid to woo their voters.

Whereas such tactics might previously have earned the Freedom Party and even Kurz a rebuke from other European countries, there was little outside criticism this time.

“The consensus in the European Union has become to throw refugees out, and it’s become difficult to say the Freedom Party is breaking taboos,” said Carsten Koschmieder, a political scientist at Berlin’s Free University.

Even German leader Angela Merkel, who was lauded for her humanitarian response in opening her country’s borders to hundreds of thousands of refugees trapped in Hungary in the summer of 2015, has shifted markedly on the issue amid pressure from members of her own center-right Union bloc.

Merkel sought Monday to play down the threat from the right after the nationalist Alternative for Germany won seats in the state legislature in Lower Saxony, a month after becoming the third-strongest party in a national vote.

The party, which goes by the German acronym AfD, now has seats in almost all German states and at the national and European level, giving it a strong platform — and millions of euros (dollars) in public funding — to attack the German chancellor’s policies on immigration.

While Merkel has refused to publicly admit any mistakes, she recently agreed to limit the number of migrants Germany takes in each year — a key demand from her CDU’s Bavaria-only ally, the Christian Social Union. The party is fearful of losing its absolute majority when Bavaria elects a new state assembly next year.

“The CSU and CDU must become a home for conservative voters that have left us,” the Bavarian party’s former leader Edmund Stoiber said. “This is a matter of survival for both parties.”

Across the continent, populist, anti-immigration sentiment has driven the political agenda in many countries for months.

French far right leader Marine Le Pen set the tone for France’s presidential campaign earlier this year by blaming immigration and the EU’s open borders for economic troubles and extremist attacks, forcing other candidates to mimic or respond to her proposals.

Mainstream conservatives and even centrist President Emmanuel Macron adopted some of Le Pen’s positions, notably on tougher border controls. Even former Socialist President Francois Hollande ratcheted up expulsions of immigrants in the later part of his term in part because of Le Pen’s growing influence on public opinion.

In the Netherlands, the anti-immigration Party for Freedom led by anti-Muslim politician Geert Wilders finished second in March elections. Mainstream parties ruled out a coalition with Wilders, but a policy blueprint published by the incoming four-party coalition includes a raft of measures clamping down on immigration, including pledges to cut the length of residency permits for refugees.

In Italy, Paolo Gentiloni’s Democratic Party-led government has pressed a controversial new strategy by Libya’s government to enlist militias as a de-facto police force to crack down on migrant smuggling. The move — intended to diffuse growing anti-migrant sentiment that could play into the hands of more populist and right-wing parties heading into Italian elections expected by spring — has succeeded in reducing the number of new arrivals.

Poland’s right-wing government came to power in 2015 on a hard-line anti-migrant agenda and continues to refuse to accept any Muslim migrants. The position appears to be extremely popular, with the ruling Law and Justice party riding high in opinion polls.

Koschmieder, the German political scientist, warned that attempts to edge out right-wing rivals by co-opting their policies might work in first-past-the-post electoral systems such as Britain — but it could backfire in countries like Austria and Germany, where a campaign focused on immigration can shift the entire political system to the right.

“The Freedom Party wasn’t weakened by this; it was made stronger,” said Koschmieder.

“If it gets into government then that doesn’t exactly demonstrate the strategy was successful,” he said, citing the fact that the Freedom Party and People’s Party together took almost 60 percent of the vote in Austria.