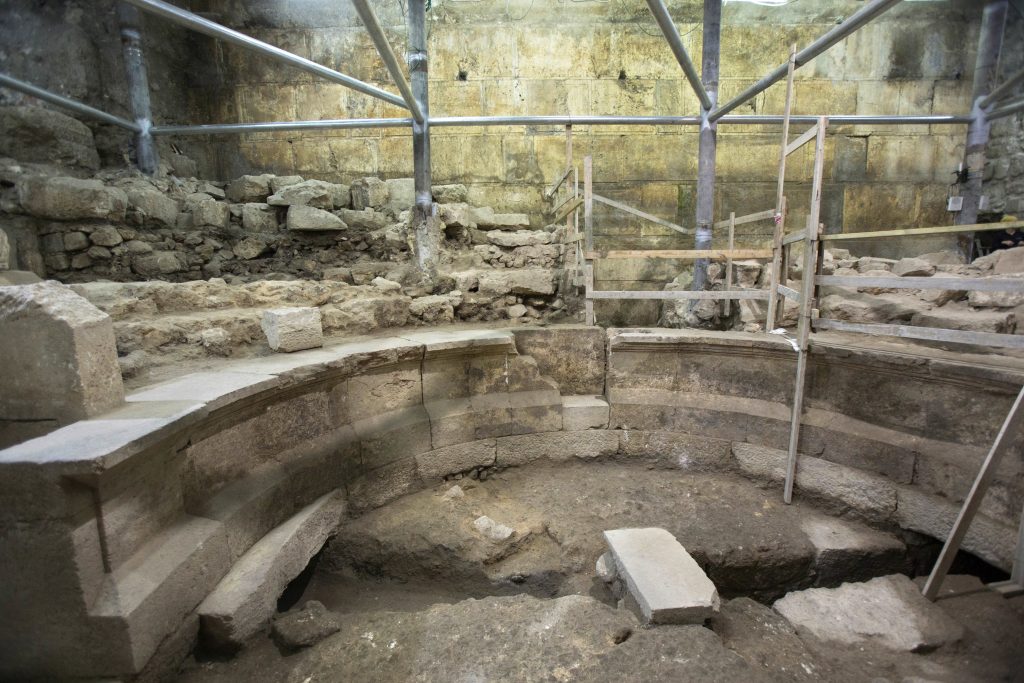 Eight stone courses of the Kosel that had been buried under a 24-foot layer of earth were recently uncovered in excavations conducted by the Israel Antiquities Authority in the Kosel Tunnels in Yerushalayim. These stone courses, completely preserved, are built of massive stones and are outstanding in the quality of their construction.

In addition, after the removal of this layer of soil, the archaeologists were surprised to discover that it covered the remnants of an extraordinary theater-like structure from the Roman period confirming historical writings that describe a theater near Har HaBayis.

These findings will be presented to the public at the Hebrew University later this year to mark 50 years since the unification of the city.

At a press conference Monday morning beneath Wilson’s Arch in the Kosel Tunnels, the stone courses and the remnants of the theater were presented. Apparently, a great deal was invested in the construction of the theater, which contained approximately 200 seats.

Rabbi Rabinovitch said: “Time after time the amazing archaeological findings allow our generation to actually touch the ancient history of our people and Jewish heritage and its deep connection to Yerushalayim. Each finding thrills me to new and powerful heights. We have a great deal of archaeological work ahead and I am certain that the deeper we dig, the earlier the periods we will reach, further anchoring the profound connection of the Jewish people to the Land of Israel.”

According to Dr. Yuval Baruch, the Yerushalayim District Archaeologist of the IAA: “The exposure of finds beneath Wilson’s Arch began as a joint venture between the Western Wall Heritage Foundation and the Israel Antiquities Authority, in an interest to create a new tourist path in the Tunnels, providing the visitor with a new perspective and exposure to the grandiose finds of recent years. The findings include portions of a magnificent structure from the Second Temple period, ritual baths and now the truly exceptional finds beneath Wilson’s Arch. Upon completing the excavations, the Israel Antiquities Authority together with the Western Wall Heritage Foundation will begin to plan the preservation and presentation of the findings.”

“The findings symbolize the guests from past empires that were here over the years, as opposed to the Jewish people, who held fast to this place some 3,000 years ago and have been here ever since and always.”

Numerous findings have been unearthed in the excavations under Wilson’s Arch, some of which are unique, including pottery vessels, coins, architectural and architectural elements, and more. Advanced research methods from various fields were employed to uncover remains invisible to the naked eye, but only viewable through a microscope. This enables conclusions to be drawn at a level of precision that would have been impossible in the past, transforming the study of the findings at Wilson’s Arch into pioneering, cutting-edge micro-archaeological research.