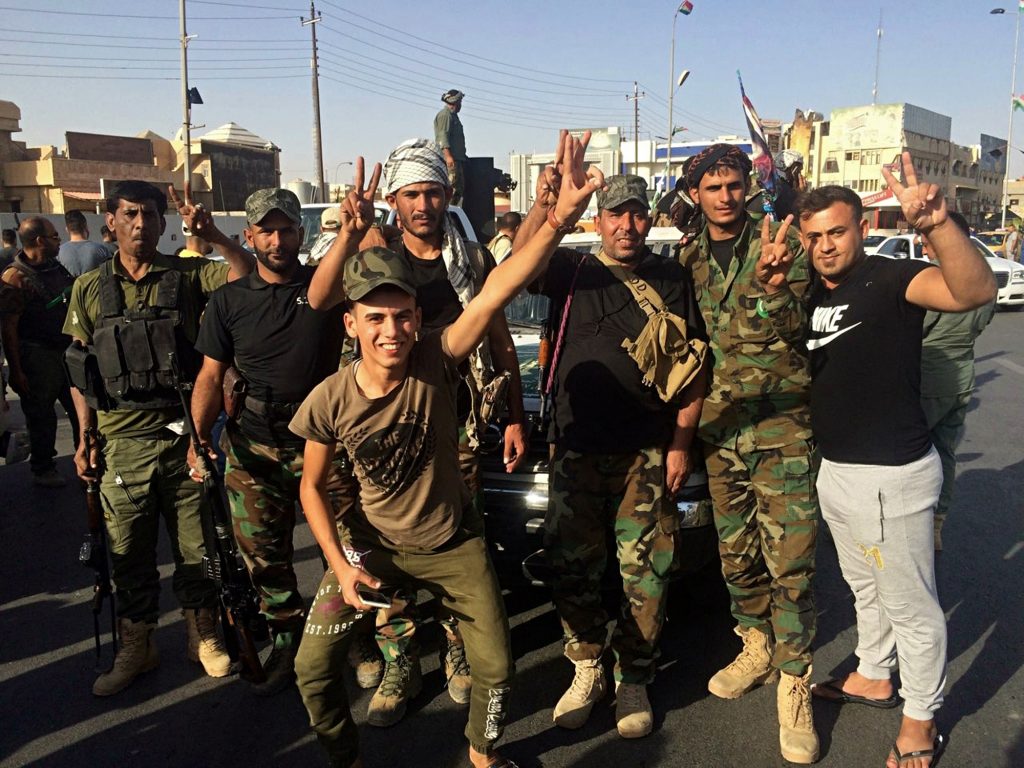 Kurdish forces were withdrawing from Kirkuk on Monday as Iraqi federal forces moved into the disputed city and seized oil fields and other infrastructure amid soaring tensions over last month’s Kurdish vote for independence.

Kurdish officials accused the Iraqi army of carrying out a “major, multi-prong attack,” and reported heavy clashes on the city’s outskirts, but a spokesman for Iraq’s state-backed militias said they encountered little resistance.

By midday, federal forces had moved into several major oil fields north of the city, as well as its airport and an important military base, according to Iraqi commanders. Kurdish party headquarters inside Kirkuk had been abandoned.

The U.S., which has armed, trained and provided vital air support to both sides in their shared struggle against the Islamic State terrorist group, described Monday’s events as “coordinated movements, not attacks,” while bemoaning the dispute as a distraction against a common enemy. It said the limited exchange of fire was a “misunderstanding.”

After initial reports of clashes in and around the city, it appeared by the afternoon as though the vastly outnumbered Kurdish forces, known as the peshmerga, were pulling out with hardly a fight.

Local police stayed in place in Kirkuk as Prime Minister Haidar al-Abadi called on civil servants to remain at their posts to serve the city. “We have only acted to fulfill our constitutional duty and extend the federal authority and impose security and protect the national wealth in this city,” he said.

Still, thousands of civilians could be seen leaving with their belongings heading north along the country roads that lead to Iraq’s autonomous Kurdish region.

Kirkuk, home to some one million Arabs, Kurds, Turkmen and Christians, has been at the heart of a long-running dispute between the autonomous Kurdish region and the central government in Baghdad. Both are close allies of the U.S.

Brig. Gen. Bahzad Ahmed, a spokesman for Kurdish forces, said federal forces seized an oil and gas company and other industrial areas south of Kirkuk in fighting with Kurdish forces that caused “lots of casualties,” without providing a specific figure.

He said Iraqi forces have “burnt lots of houses and killed many people” south of the disputed city. His claims could not be independently verified.

A spokesman for Iraq’s state-sanctioned militias said they had “achieved all our goals” in retaking areas from Kurdish forces in and around the northern city. Ahmed al-Assadi said federal forces came under fire from “some rebels” after launching the operation early Monday and returned fire. He did not say whether they suffered any casualties.

He said federal forces have been deployed in the area of the K-1 military base, the Kirkuk airport and a number of oil fields and installations. The Iraqi military said it seized two major oil fields outside the city.

Al-Assadi said the state-backed militias, mainly Shiite Arab fighters known as the Popular Mobilization Forces, have not entered the city center, but Associated Press reporters saw Turkmen PMF militiamen taking up posts in the western part of the city.

Tensions have soared since the Kurds held a non-binding referendum last month in which they voted for independence from Iraq. The central government, along with neighboring Turkey and Iran, as well as the United States, rejected the vote.

The central government and the autonomous Kurdish region have long been divided over the sharing of oil revenues and the fate of disputed territories like Kirkuk that are controlled by Kurdish forces but are outside their self-ruled region.

The Kurds assumed control of Kirkuk, in the heart of a major oil-producing region, in the summer of 2014, when IS terrorists swept across northern Iraq and the country’s armed forces crumbled.

Iraq has since rebuilt its armed forces with considerable U.S. aid, and they are battle-hardened and flush with victory after driving IS from most of the territory it once held. Fighting alongside the armed forces are tens of thousands of state-sanctioned militiamen, mainly Shiite Arab fighters backed by Iran, whom the Kurds view as an instrument of demographic change. Prime Minister Haider al-Abadi has said the militias will remain outside the city.

State-run Al-Iraqiya TV had earlier reported that federal forces rolled into parts of the countryside outside Kirkuk without facing resistance. However, some residents of the city and an Iraqi militia commander reported shelling.

Al-Iraqiya carried a statement from al-Abadi’s office saying he had ordered federal forces to “impose security in the city in cooperation with the inhabitants and the peshmerga,” indicating he was willing to share administration.

Baghdad has been turning the screws on the Kurdish region since the September referendum, pushing Kurdish leaders to disavow the vote and accept shared administration over Kirkuk.

Iraq’s government barred international flights to and from the region and asked neighboring Turkey and Iran to close their borders. Iran closed its three official crossings with the Kurdish region Sunday, Kurdish media reported. It also froze currency transfers to four banks operating in the Kurdish region.

Al-Abadi’s Cabinet said Sunday that fighters from Turkey’s Kurdish insurgency, the PKK, were beginning to appear in Kirkuk, and declared that would be tantamount to an act of war.