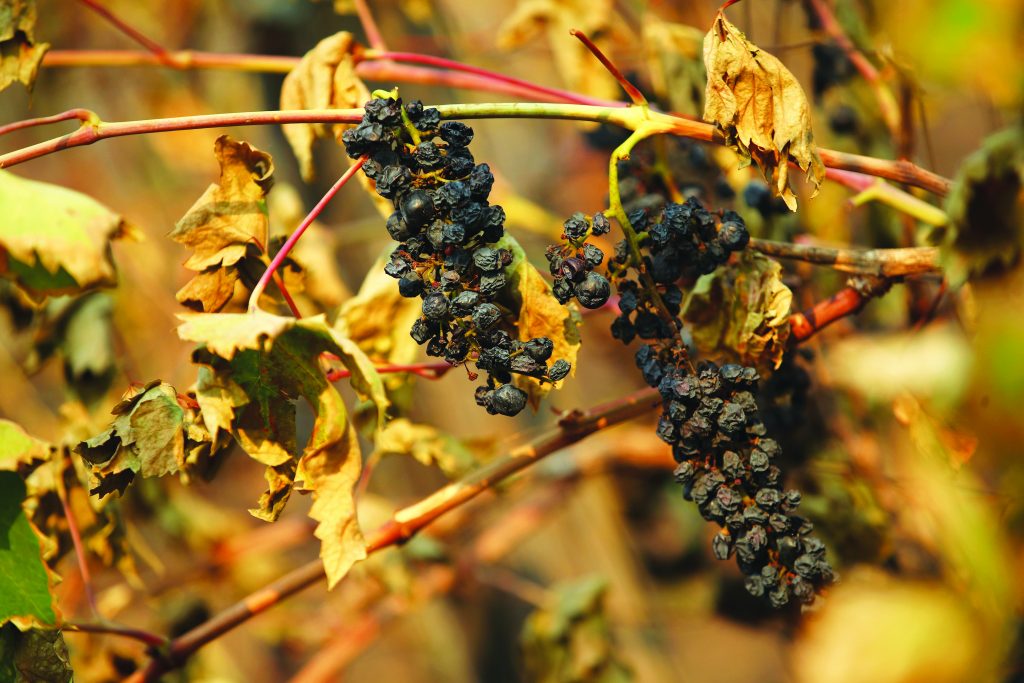 Devastating wildfires, which have destroyed thousands of homes and claimed dozens of lives in northern California, continued to rage this week, preventing many from fully assessing the extent of the damage caused. It is an area rich in wine production, and several vineyards used by kosher vintners have been affected as well as the area’s Jewish population. Hagefen, the only kosher winery whose production facility is also in the Napa region, was particularly hard hit.

Motty Herzog, general manager of the best-known producer of kosher California wines, Herzog Wine Cellars, said that fires burned on all sides of his company’s vineyards, yet theirs were spared.

“It’s a complete nes,” he told Hamodia. “There are vineyards on all sides of us that are scorched, and ours just seem to have gone between the flames … the siyatta diShmaya we had is unbelievable.”

Herzog is headquartered some six hours south of the affected area, in Oxnard, yet grapes for its highest quality labels come from the Napa and Sonoma regions, accounting for about 20 percent of its products, which were in the midst of the fires.

Of the six vineyards the company owns in the area, three were harvested before the blazes began. Three others were picked this week. While flames steered clear of all Herzog’s fields, Mr. Herzog said that they have yet to evaluate the impact of smoke damage on the grapes that were harvested after the fires broke out.

“We don’t know yet if we will be able to use them, but either way, we had a lot of mazel. When a vineyard burns, it has to be replanted from scratch and it takes years for the fruit to come back,” he said.

Mr. Herzog said that as Napa is widely considered one of the world’s highest quality wine grape regions, the fires would take a heavy toll on the industry as well as on prices, adding that even though his company’s vineyards were spared, costs would go up for him as well, since many of the grapes used by Herzog are bought from other fields.

Jeff Morgan, co-owner of Covenant Winery, another of the area’s kosher wine producers, said that he had yet to learn the fate of his fields in Sonoma as ongoing fires and rescue efforts had left them inaccessible for the time being.

“That’s the big unknown,” he told Hamodia. “Most of our grapes were picked before the fires, but we can’t get up the mountain to see if those vineyards have now been destroyed.”

Covenant’s production facilities are in Berkeley, some 40 miles from the fires. Even there, he said, smoke clouded the air, making it unpleasant to go outdoors for several days.

Despite the possibility of damage to the vineyards, Mr. Morgan was grateful that he was spared the equipment loss that many whose operations are located in Napa and Sonoma incurred.

“We might take a bit of a financial hit and might have to bring in grapes from other parts of the state next year, but I’m a lot better off than many of my colleagues because my winery structure was not threatened,” he said. “Whatever it is, the wine industry here in Northern California is strong. We will replant and rebuild.”

Hagefen Cellars sustained heavy damage. While confident they could rebuild, they are still in the midst of planning how that could be accomplished.

“The main ranch has serious damage,” Hagefen’s owner, Ernie Weir, told Hamodia. “Everybody is safe, which is the main thing, but the fires came right through here and burned about an acre of the vineyards, our tractors and almost all of our agricultural equipment, the guest house, and all of the landscaping. The winery itself is mostly okay, but we do have some infrastructure damage as well.”

Hagafen had harvested all of its grapes for this season before the fires struck, and by Monday had resumed some wine making. The site was visited by several insurance adjusters and Mr. Weir said that much of his company’s recovery plans were dependent on the level of government assistance they would qualify for. He was hopeful that production could return to prior levels and that he could continue to maintain his 12-person staff.

“We’ve been doing all we can to clean things up and return to some level of normal, but we’re still in the early stages of putting everything back together,” he said.

When the fires first turned serious, Mr. Weir was in his home, not far from the winery. He noticed the fires early in the evening and by midnight was warned to evacuate.

“We got a call that the fire was approaching the winery, so we drove there and rescued a family who have been living on the grounds and drove to a friend’s house,” he said.

Although undamaged, as of Tuesday the Weirs’ home was still without electricity.

The Napa and Sonoma areas are home to many Jews, although the vast majority of them are unaffiliated.

Rabbi Mendel Wolvovsky, director of Chabad of Sonoma, based in the city of Santa Rosa, awoke at 3 a.m. last Monday to see the fires raging uncomfortably close to his home.

“We saw them burning from two directions. We drove to a town further west and stayed there until about noon the next day when it was safe to return,” he told Hamodia.

A week later, as the fires were still burning, Rabbi Wolvovsky said, smoke and ash were still creating a gray sky and filling the air with particles. People in the area were still being advised to stay indoors and to wear masks when leaving their homes.

He has spent much of his time over the last few days checking up on families who have been the hardest hit.

“Five families that we know have lost their homes,” he said. “The fires were so bad that they could not even try to save individual homes, so they lost everything.”

Many more who live in mandatory evacuation areas were still in shelters or other temporary quarters as of early this week.

“At first it was really a matter of sakanas nefashos; we started calling people we knew who lived near the fires to make sure they had a place to go,” he said. “A bunch of people lost their tefillin and someone offered to sponsor new pairs for them, and to order new mezuzos for when they have a new home to put them on, b’ezras Hashem. We just hope that this all ends very soon and that we are able to rebuild what we have lost and to make it even better than it was before.”