World Death Toll From Somalia Bombings Jumps to Over 300
World 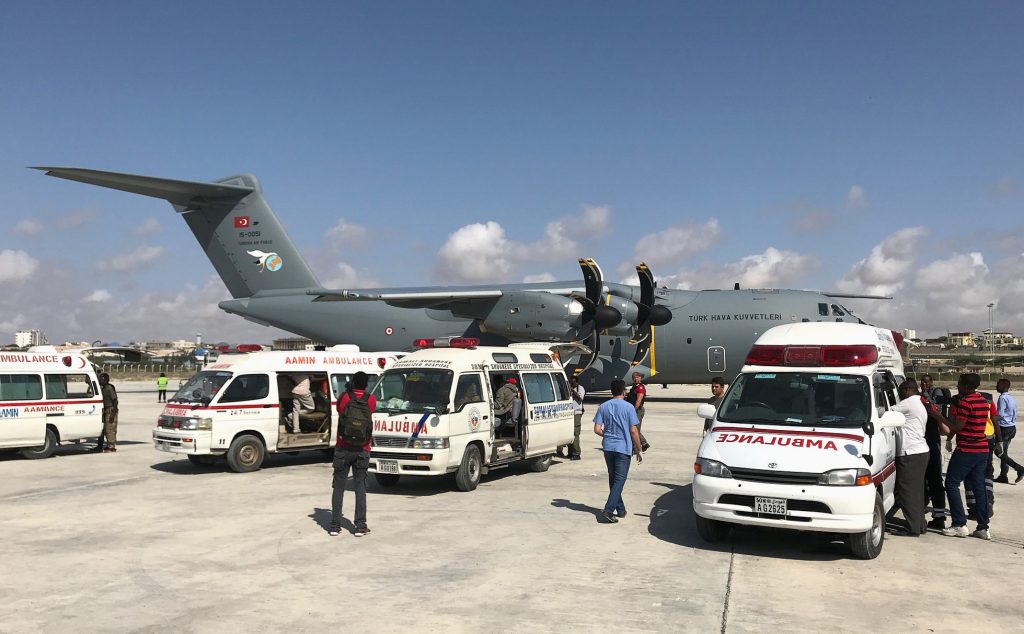 The number killed in twin bombings in the Somali capital Mogadishu over the weekend has risen to more than 300, the head of the city’s ambulance service said on Monday.

“We have confirmed 300 people died in the blast. The death toll will still be higher because some people are still missing,” Abdikadir Abdirahman, the director of Amin ambulances, told Reuters on Monday.

Aden Nur, a doctor at the city’s Madina hospital, said they had recorded 258 deaths while Ahmed Ali, a nurse at the nearby Osman Fiqi hospital, told Reuters five bodies had been sent there.

Nur said 160 of the bodies could not be recognized. “(They) were buried by the government yesterday. The others were buried by their relatives. Over a hundred injured were also brought here,” he told Reuters at the hospital.

Some of the injured were being evacuated by air to Turkey for treatment, officials said. Locals visiting their injured relatives or collecting their bodies filled every available space in Madina hospital.

“My last time to speak with my brother was some minutes before the blast occurred. By then he told me, he was on the way to meet and was passing at K5,” Halima Nur, a local mother, told Reuters, referring to one of the junctions that was struck. “I am afraid he was among the unrecognized charred bodies that were buried yesterday. I have no hope of getting him, alive or dead. But I cannot go home.”

Saturday’s bomb attacks were the deadliest since Islamist terrorist group al-Shabaab began an insurgency in 2007.

Neither it nor any other group had claimed responsibility, but al-Shabaab, which is allied to al-Qaida, stages regular attacks in the capital and other parts of the country. The group is waging an insurgency against Somalia’s U.N.-backed government and its African Union allies in a bid to impose its own strict interpretation of Islam.

The militants were driven out of Mogadishu in 2011 and have been steadily losing territory since then to the combined forces of AU peacekeepers and Somali security forces.

But al-Shabaab retains the capacity to mount large, complex bomb attacks. Over the past three years, the number of civilians killed by insurgent bombings has steadily climbed as al-Shabaab increases the size of its bombs.

Some of those seriously injured in Saturday’s bombing were moved by ambulance to the airport on Monday morning to be flown to Turkey for further treatment, Nur added.

Workers unloaded boxes of medicine and other medical supplies from a Turkish military plane parked on the tarmac, while Turkish medical teams attended to the cases of injuries moved from the hospital for evacuation.