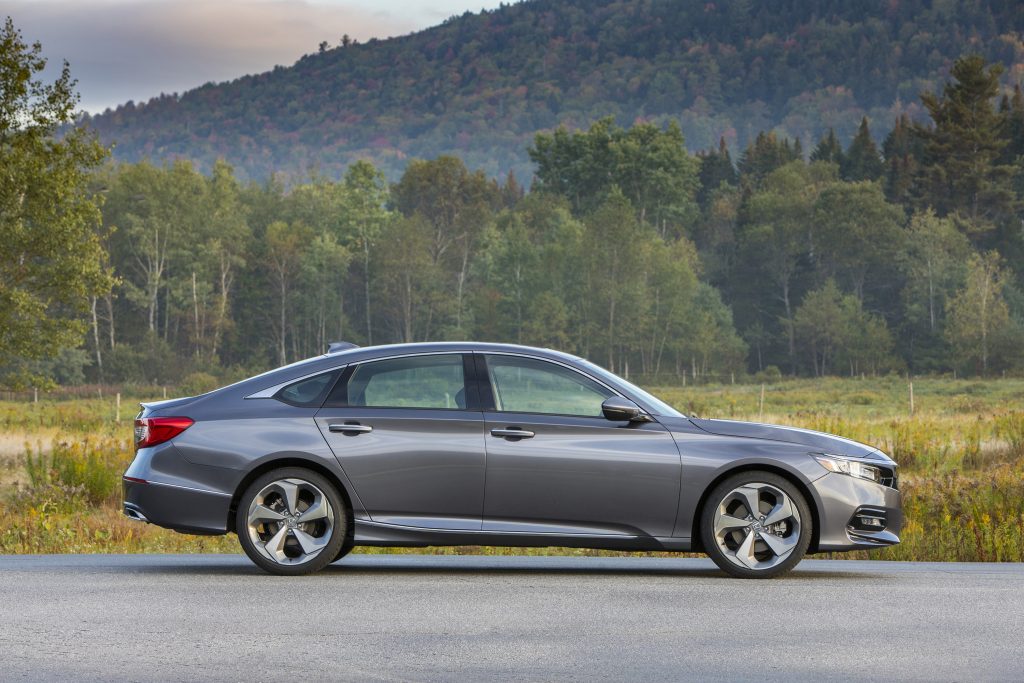 New technology, advanced safety features and a roomy, comfortable interior, propel the 2018 Honda Accord to the top of the midsize sedan class.

The base Accord goes on sale this month with a 192-horsepower turbocharged 1.5-liter engine. A more powerful model follows in November. A fuel-efficient hybrid is due early in 2018.

Accord prices start at $23,570, excluding destination charges. I tested a top-of-the-line 2.0T Touring model that stickered at $35,800, thanks to features that included leather upholstery, a sunroof, a navigation system, 252-horsepower 2.0-liter turbocharged engine, blind-spot alert and more. Pricing on the hybrid will be announced closer to when it goes on sale.

The new Accord is roomier and lighter, but nearly the same size as the outgoing model. It’s the first Accord to offer turbocharged engines, ditching the V-6 that powered top models for years.

Midsize sedan sales have slipped as buyers turn to SUVs such as the Honda CR-V and Ford Escape, but the segment remains big, competitive and profitable.

Sporty looks, and handling that made the Accord just a bit more exciting than its prosaic competitors, made the car a favorite for years, but recent models lost some of that edge.

The new car changes that. The steering is fast and responsive. The 2.0-liter turbo and 10-speed automatic transmission in the Touring model I tested delivered confident acceleration. The sport mode changed engine sound and shift points noticeably.

The shifter is an awkward set of buttons in an arrangement that never felt natural to me. Honda uses the same layout in the Odyssey minivan and its Acura luxury brand.

The Accord feels small and maneuverable, despite being one of the biggest cars in its class. That’s a credit to good suspension and steering tuning and the fact that the Accord’s center of gravity is lower than in the old car.

The base Accord’s 192-horsepower 1.5-liter turbo and six-speed manual or continuously variable automatic transmission rated 30-33 mpg — depending on other equipment — in combined city and highway driving. That’s good, but not the best among midsize sedans.

The 2018 Accord’s wheelbase is longer, while overall length shrinks slightly. Passenger space increases 2.9 cubic feet to be at or near the top of its class, depending on whether the car has a sunroof. The 16.7 cubic-foot trunk is the biggest in its class. Most of the extra passenger space went to rear legroom, but the front seat is roomy and accommodating, with lots of storage. The interior looks and feels great, with soft materials on the doors, dash and armrests.

It’s hard to imagine, but a couple of generations of American drivers have grown up not understanding why a new Honda Accord is a big deal.

5 things you didn’t know about the Honda Accord

In more than 40 years of production, the Honda Accord has become one of the benchmarks against which other midsize family sedans are judged.

It’s also the cornerstone of Honda’s North American production, engineering and design network, which employs thousands. Here are five other things to know about the Honda Accord:

With 221,013 sales, the Accord single-handedly outsold 30 entire brands in the U.S. through August of this year, including Chrysler, Dodge, VW, Buick, Mazda, Infiniti, Mitsubishi, Acura and Cadillac, according to figures from Urban Science.

Since production began in 1976, Honda has sold 13 million Accords in the U.S. It became the first Japanese-brand car built here in 1982. Since then, Honda has built 11 million here.

Midsize-sedan sales are falling but still represent the third-largest segment in the auto industry, with 1,308,964 sales through August.

The 2018 Accord is the first to offer turbocharged four-cylinder engines. Honda equipped the top models with a V-6 in previous generations.