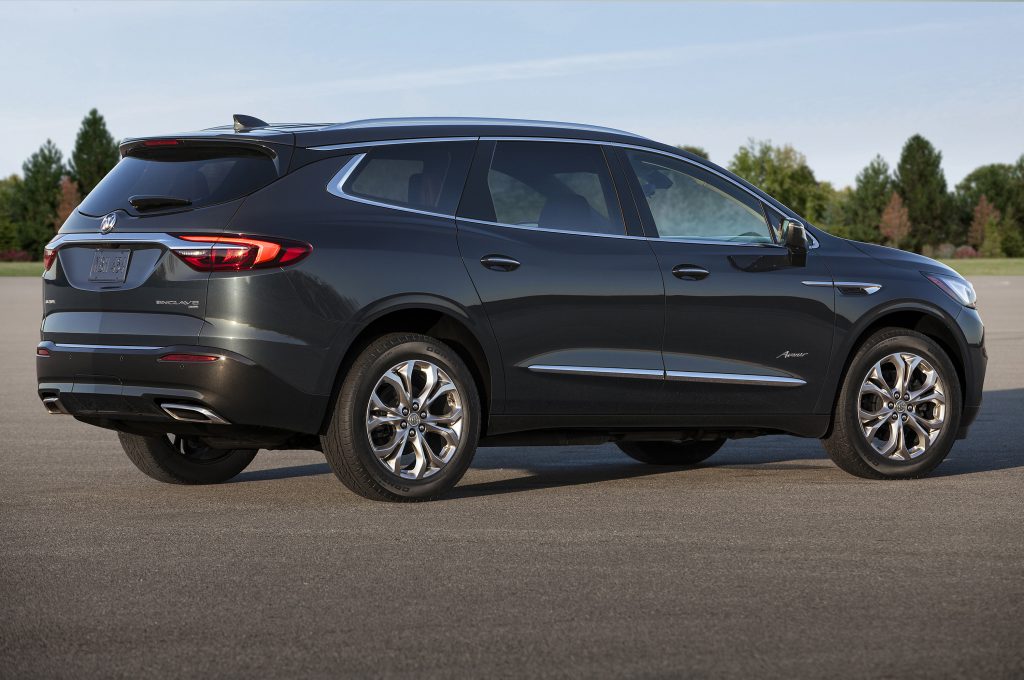 Buick takes another big step in its transformation into a legitimate luxury brand with the 2018 Enclave Avenir, an elegant and advanced family-carrying SUV arriving in dealerships this fall. The Enclave (I give it four out of four stars) carries seven people in comfort and style. “Avenir” is Buick’s new top-of-the-line trim, an analogue to GMC’s high-end and highly profitable Denali line. The spacious seven-passenger Enclave is the first Buick to offer an Avenir trim level, a package that includes 20-inch wheels, a striking new grille badge and loads of standard features.

The original Enclave started Buick’s rebirth in the U.S. when it went on sale 10 years ago. Roomy and very quiet inside, it inaugurated a generation of vehicles that reinvigorated Buick, which had lost all pizzazz and become a sleepy brand associated with retirees and boring sedans.

Buick’s very different today, and the 2018 Enclave Avenir SUV is the flagship of a new lineup developed to redefine the brand upward again.

The 2018 Enclave is all new, bigger but also lighter and more maneuverable than the old model. At 204.3 inches, its 2.4 inches longer than the 2017 model, but about 300 pounds lighter. Rear legroom and cargo space increase thanks to the longer wheelbase and a compact new suspension.

Despite its greater length, the 2018 Enclave’s longer wheelbase — up 2.0 inches — and new steering system contribute to a three-foot reduction in turning radius. That translates to more than tidy U-turns. The new Enclave felt small and light as I drove one through 60 miles of narrow, twisting roads in the Smoky Mountains.

It stickered at $58,460. All prices exclude destination charges.

The Enclave competes primarily with vehicles from lower luxury brands such as the Acura MDX and Infiniti QX60, along with customers moving up from mainstream brands such as Ford, Honda, Hyundai, Nissan and Toyota. The Enclave Avenir could also attract some attention from shoppers considering SUVs such as the Audi Q7 and Volvo XC90.

Enclave prices are competitive with those vehicles.

The Enclave is exceptionally roomy. The third-row seat can accommodate adults, while the middle row’s two captain’s chairs are comfortable and fold flat to create a large cargo bed. The Avenir’s third row features power switches to fold flat and return upright. There’s more cargo space behind the second and third rows than in the MDX, Q7, QX60 or Pathfinder. A compartment under the cargo space behind the third row adds 3.1 cubic feet of hidden storage.

Head room is good in all three rows. The front seat has plenty of storage with a deep bin in the center console and more storage space under the console.

The controls are simple and easy to use. Buttons and dials control audio and climate, while a touch screen and voice recognition work well for phone, navigation and other features.

The interior design features sweeping lines and soft materials on every surface. The Avenir’s leather seats have attractive stitching.

The exterior styling is equally handsome. The nose appears lower and wider, thanks to swept back LED lights and a new grille that features glossy black diamond mesh and nearly full-width chrome wings running from a round Buick badge in the center. Character lines on the sides, and a roof that slopes down at the rear, enhance the impression of a trim vehicle.

A handy tip ‘n slide passenger-side second-row seat provides easy access to the third row. Buick chose not to offer the feature on the driver’s side, ostensibly because its less safe for kids to enter and exit on that side. I suspect the motivation was saving money and weight. The Smart Slide seat is so easy to use that it should be available on both sides if there weren’t a compelling reason. I don’t buy protecting children. If that were unsafe, minivans wouldn’t have sliding doors on both sides. Plus, even the safety argument doesn’t apply in common entry and exit spots such as families’ driveways and parking lots and one-way streets.

The front shoulder belts are not adjustable for height. That’s a small omission, but it’s a convenient feature common in luxury vehicles.

I was also surprised Buick doesn’t offer a factory-installed rear-seat entertainment system. A dealer-installed system is available — a pair of headrest-mounted 8-inch screens — for $1,750 or $1,995, depending on whether you want HDMI and other inputs or a Blu-Ray/DVD player. It’s reportedly a simple installation — just replace the factory headrests with new ones — so it probably works fine.

Still, I’d suggest checking it out. Dealer-installed accessories aren’t always up to the level of factory equipment.

The Enclave’s 3.6-liter V-6 produces 310 horsepower at 6,800 rpm and 266 pound-feet of torque at a reasonably low 2,800 rpm. Seamlessly mated to a new nine-speed automatic transmission, the powertrain delivers good acceleration, including on the highway and in hilly countryside. The transmission shifts quickly and smoothly. The engine is quiet, except when floored.

The Enclave AWD rated 17 mpg in the city, 25 highway and 20 in combined driving in EPA tests. I got better than 24 mpg in nearly a week of driving that included a long, fast run over mountain roads and interstates from North Georgia to Detroit.

The key combined figure compares well to most competitors, and the fact that the Enclave runs fine on regular gas while several competitors use premium should make the Buick less expensive to run than the MDX, Q7, QX60 and XC90, according to the EPA. The Pathfinder and XC90 should have a lower annual fuel bill.

The Buick Enclave Avenir is a beautiful, comfortable SUV offering value and advanced safety and connectivity features. I felt as good when I got out after nearly 10 solid hours at the wheel as I did at the beginning of the drive. Well-balanced steering and a good suspension delivered good handling and comfort on a variety of roads. The Enclave is not as sporty as pricier luxury SUVs such as the Q7, but it’s a fine choice for anyone who wants to carry several people in comfort and style.