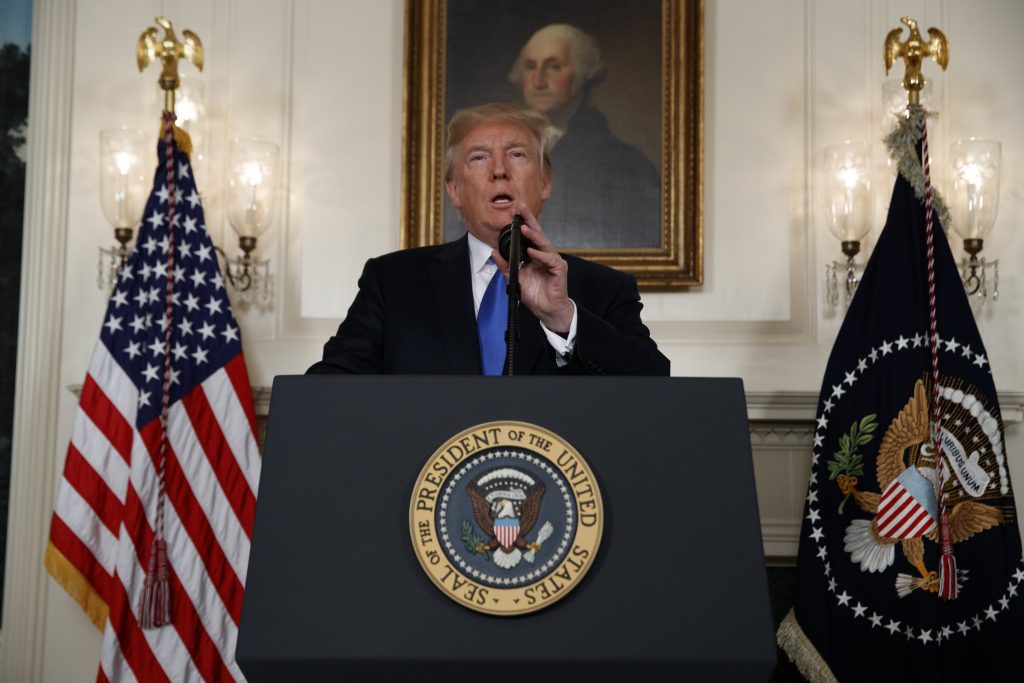 President Donald Trump struck a blow against the 2015 Iran nuclear deal on Friday, defying both U.S. allies and adversaries by refusing to formally certify that Tehran is complying with the accord even though international inspectors say it is.

Warning that he might ultimately terminate the agreement, President Trump’s move was a major change in U.S. foreign policy at a time when his administration is also in a crisis with North Korea over that country’s nuclear ambitions.

It was the second time in two days that President Trump took aim at the legacy of his predecessor Barack Obama after signing an executive order on Thursday to weaken the Democratic former president’s signature healthcare reform.

Hailed by Obama as key to stopping Iran from building a nuclear bomb, the deal was also signed by China, France, Russia, Britain, Germany and the European Union.

But President Trump says it was too lenient on Tehran and effectively left the fate of the deal up to the U.S. Congress, which might try to modify it or bring back U.S. sanctions previously imposed on Iran.

“We will not continue down a path whose predictable conclusion is more violence, more terror and the very real threat of Iran’s nuclear breakout,” Trump said.

European allies have warned of a split with Washington over the nuclear agreement and say that putting it in limbo as Trump has done undermines U.S. credibility abroad.

Trump’s “America First” approach to international agreements has also led him to withdraw the United States from the Paris climate accord and the Trans-Pacific Partnership trade talks and renegotiate the North American Free Trade Agreement with Canada and Mexico.

Iranian President Hassan Rouhani said on Friday that Tehran was committed to the deal and accused Trump of making baseless accusations.

“The Iranian nation has not and will never bow to any foreign pressure,” he said. “Iran and the deal are stronger than ever.”

The chief of the U.N. atomic watchdog reiterated that Iran was under the world’s “most robust nuclear verification regime” and that Tehran is complying with the deal.

“The nuclear-related commitments undertaken by Iran under the JCPOA are being implemented,” Yukiya Amano, director general of the International Atomic Energy Agency, said, referring to the deal by its formal name.

Under U.S. law, the president must certify every 90 days to Congress that Iran is complying with the deal, which Trump had reluctantly done twice.

In Brussels, EU foreign policy chief Federica Mogherini said Washington could not unilaterally cancel the accord.

“We cannot afford as the international community to dismantle a nuclear agreement that is working,” said Mogherini, who chaired the final stages of the landmark talks. “This deal is not a bilateral agreement.”

Congress will now have 60 days to decide whether to reimpose economic sanctions on Tehran that were lifted under the pact.

If Congress reimposes the sanctions, the United States would in effect be in violation of the terms of the nuclear deal and it would likely fall apart. If lawmakers do nothing, the deal remains in place.

Senate Foreign Relations Committee Chairman Bob Corker was working on amending a law on Iran to include “trigger points” that if crossed by Tehran would automatically reimpose U.S. sanctions.

A source familiar with the issue said the triggers include reimposing U.S. sanctions if Tehran were deemed to be less than a year away from developing a nuclear weapon.

The trigger points are also expected to address tougher nuclear inspections, Iran’s ballistic missile program and eliminate the deal’s “sunset clauses” under which some of the restrictions on Iran’s nuclear program expire over time.

It is far from clear that Congress will be able to pass the legislation.

Trump warned that if “we are not able to reach a solution working with Congress and our allies, then the agreement will be terminated.”

He singled out Iran’s Islamic Revolutionary Guard Corps for sanctions and delivered a blistering critique of Tehran, which he accused of destabilizing actions in Syria, Yemen and Iraq.

The Trump administration censured the Revolutionary Guards but stopped short of labeling the group a foreign terrorist organization.

The body is the single most dominant player in Iran’s security, political and economic systems and wields enormous influence in Iran’s domestic and foreign policies.

It had already previously been sanctioned by the United States under other authorities, and the immediate impact of Friday’s measure is likely to be symbolic.

The U.S. military said on Friday it was identifying new areas where it could work with allies to put pressure on Iran in support of Trump’s new strategy and was reviewing the positioning of U.S. forces.