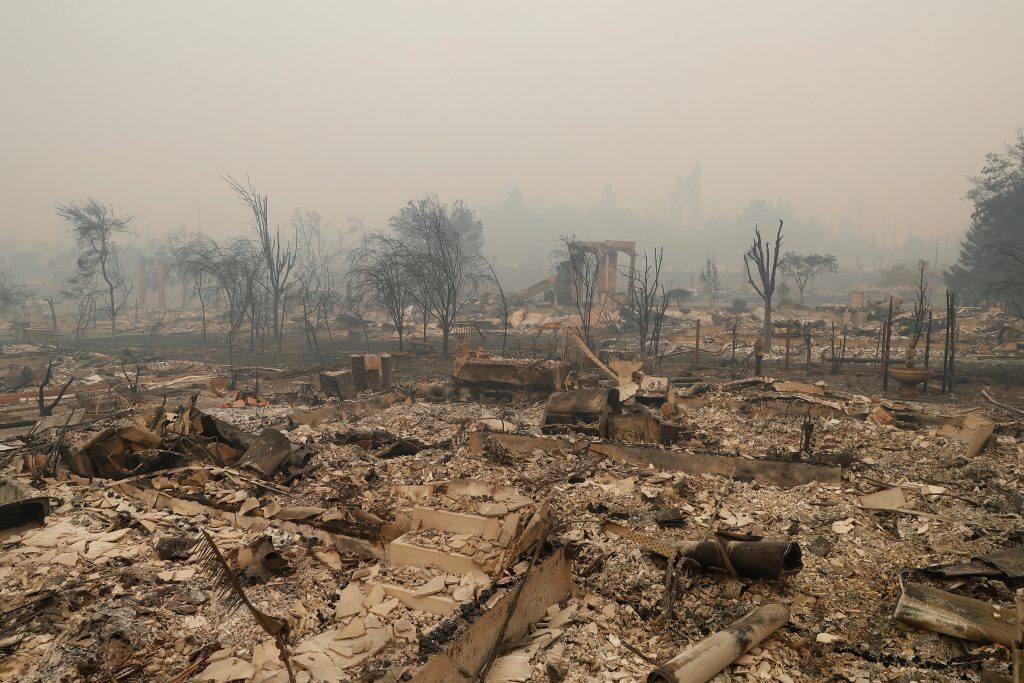 Fast-moving wildfires burning across Northern California’s wine country had claimed at least 15 lives statewide by Tuesday afternoon and destroyed an estimated 1,500 homes and commercial buildings, according to the California Department of Forestry and Fire Protection.

Flames have spread across more than 115,000 acres since the fires broke out on Sunday, but firefighters took advantage of cooler temperatures, decreased winds and coastal fog on Tuesday to try to make headway against the fires.

North of San Francisco, the blazes reduced houses to ashes in several communities. The city of Santa Rosa was particularly hard hit by the so-called Tubbs Fire, which damaged a Hilton hotel and destroyed a mobile-home park.

The flames were fanned by high temperatures and dry conditions, displacing tens of thousands of residents and forcing schools and at least two hospitals in Sonoma County to close.

Steve Crawford, a CalFire operations chief, said at a briefing for law-enforcement and utility officials on Tuesday morning that a change in the weather could help firefighters.

“We need to jump on it and take advantage of this lull before any other wind jumps up,” Crawford said. “There’s a lot of devastation out there, people running around who just lost everything.”

In the celebrated wine country north of San Francisco, Sonoma County bore the brunt of the fatalities, with 13 of the deaths in California wine country.

Napa Valley Vintners, a trade group with 550 members, said it was too early to estimate the economic impact of the fires. At least four wineries had suffered “total or very significant losses,” and at least nine others reported damage to their winery, outbuildings or surrounding vineyards, the group said.

Ninety percent of grapes had been picked before the fires started, with almost all of those still on the vine Cabernet Savignon, a thick-skinned variety that is not expected to be impacted by smoke from the fires.

In addition to potential damage to vineyards from fire itself, sustained exposure to heavy smoke can taint unpicked grapes, according to wine-making experts.

More than 91,000 homes and businesses served by Pacific Gas & Electric were without power, with most of those customers in Northern California’s Sonoma and Napa counties, and gas was shut off to 28,000 customers, representatives for the utility company said.

California Governor Jerry Brown declared a state of emergency in Napa, Sonoma and five other counties.

The blaze triggered the evacuation of 5,000 people in the communities of Anaheim Hills and Orange Hills as it spread through grass and oak trees, he said, and was only 25 percent contained as of Tuesday afternoon.

The Federal Emergency Management Agency (FEMA) has approved funds to help cover the cost of fighting 10 fires across the state, it said on Tuesday.