Politics Trump Challenges Tillerson to an IQ Test; White House Says It Was a Joke
Politics 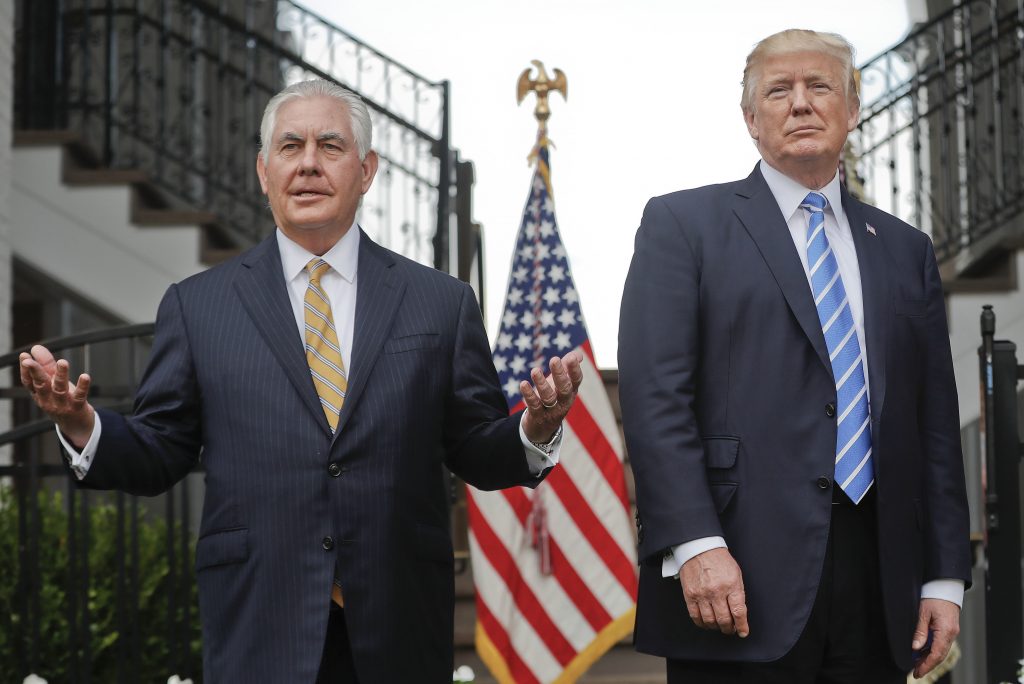 President Donald Trump and Secretary of State Rex Tillerson tried Tuesday to smooth over tensions in their relationship during a White House lunch after the president proposed an “IQ tests” faceoff with his top diplomat, who earlier had privately called Trump a “moron” and disparaged his grasp of foreign policy.

In an interview with Forbes magazine published Tuesday morning, Trump fired a shot at Tillerson over the “moron” revelation, first reported by NBC News and confirmed by several other news organizations, including The Washington Post.

“I think it’s fake news,” Trump said, “but if he did that, I guess we’ll have to compare IQ tests. And I can tell you who is going to win.”

White House press secretary Sarah Huckabee Sanders later insisted that Trump’s comment was “a joke and nothing more than that.”

“The president certainly never implied that the secretary of state was not incredibly intelligent,” Sanders said in Tuesday afternoon’s news briefing. She added that Trump has “100 percent confidence” in Tillerson and admonished reporters for taking the president’s comment so seriously.

“Maybe you guys should get a sense of humor and try it sometime,” she quipped.

Regardless of whether Trump was trying to make a joke, his “IQ tests” challenge is the latest evidence of what White House officials have described as a breach of trust between the president and the secretary of state.

Although Trump has said publicly that he has confidence in Tillerson, as he did Tuesday, behind the scenes he has long been brooding about Tillerson’s job performance, according to administration officials and outside advisers. Trump has been frustrated by what he sees as the secretary’s traditionalist world view – on a host of issues, from Iran to North Korea º in contrast to the president’s desire to redefine America’s role around the globe.

White House chief of staff John Kelly and Defense Secretary Jim Mattis have been helping to ease tensions between the two men. Both Kelly and Mattis have privately stressed the imperative of stability atop the State Department at a critical moment for the nation. Trump is trying to manage the North Korean nuclear crisis and planning an ambitious diplomatic trip to Asia in early November.

Trump met for lunch Tuesday with Tillerson and Mattis in the president’s private dining room at the White House. Sanders characterized the lunch as “a great visit.”

Shortly before the lunch, a reporter asked Trump whether he had undercut Tillerson with his comments to Forbes.

“No, I didn’t undercut anybody. I don’t believe in undercutting people,” Trump said during a brief media appearance in the Oval Office, as he sat beside former Secretary of State Henry Kissinger during a meeting to discuss foreign affairs.

When a reporter asked Trump whether he has confidence in Tillerson as his secretary of state, the president replied, “Yes.”

Over the weekend, reporters asked Trump about his relationship with Tillerson.

In the Forbes interview, for the magazine’s cover story under the headline “Inside Trump’s Head,” the president teases upcoming economic-development legislation “nobody knows about” that would penalize companies that move operations overseas and offer incentives for those that stay in the United States.

Trump previewed what he called “an economic-development bill, which I think will be fantastic. Which nobody knows about. Which you are hearing about for the first time.” The president said the policy is “both a carrot and a stick.”

Trump also told Forbes that he has purposefully not filled many jobs throughout the federal government, including at the State Department, where several top positions remain vacant.

“I’m generally not going to make a lot of the appointments that would normally be – because you don’t need them,” Trump said. “I mean, you look at some of these agencies, how massive they are, and it’s totally unnecessary. They have hundreds of thousands of people.”