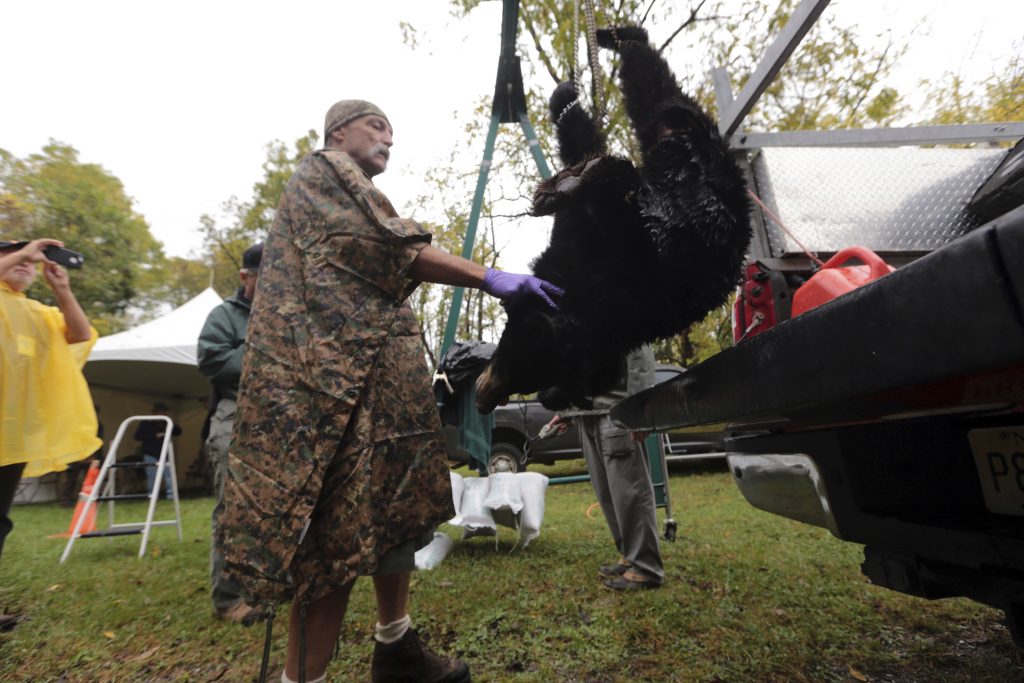 Thousands of hunters and some small groups of protesters spread out across northern New Jersey on Monday without any reports of major incidents during the state’s latest bear hunt.

State wildlife officials have touted the annual hunts as an important part of controlling the bear population and minimizing run-ins with humans, particularly in the northern part of New Jersey known as bear country. There are an estimated 2,400 to 2,800 bears in the eight counties where this week’s hunt will take place.

Pro-hunting groups, including the New Jersey State Federation of Sportsmen’s Clubs, share wildlife officials’ views. They say sport hunting, fishing and trapping conducted under proper regulation are important, valuable tools in the management and preservation of a healthy, high-quality wildlife population overall and are part of a sound, scientific plan.

They also say management of the state’s resources should not be influenced by partisan politics or special interest groups.

But animal rights activists and other critics say the hunts are inhumane, fearing hunters using arrows will more likely wound or maim the animals instead of killing them. They also argue that the hunts are not needed, noting a sharp decrease in the number of complaints filed about bears this year.

Several bears had been killed, although an exact number was not yet available.

Meanwhile, two protesters were arrested at the check station at Whittingham Wildlife Management Area in Fredon.

A woman was taken into custody after lying down in a road to block a hunter’s vehicle, while a man was detained after he moved into a road from an area designated for protesters. Both were charged with obstructing the administration of law and two other minor charges.

This year’s hunt could be one of the last for a while if Phil Murphy, the Democrat running to replace Republican Gov. Chris Christie, wins next month’s election.

Speaking Monday at a campaign event in Trenton, Murphy reiterated that he would impose a moratorium on the hunts so officials can test the effectiveness of nonlethal means of bear control.

Lt. Gov. Kim Guadagno, the GOP gubernatorial hopeful, also addressed the hunt during a separate event Monday in Bridgewater. Guadagno said she’s in favor of an “evidence based” hunt, which is what the state is doing now, and that the “cull” is needed.

The six-day hunt started at sunrise in eight counties. The first three days are reserved for bow hunting, while both hunting with bows and muzzle-loading guns will be allowed during the last three days.

State parks and wildlife management areas were open to hunting in Hunterdon, Morris, Sussex and Warren counties, and in areas of Bergen, Mercer, Passaic and Somerset counties. Bow hunters are allowed on private property with the owner’s permission, but they can’t fire arrows within 150 feet (45.72 meters) of a building.

Hunters are required to have permits for the zones they plan to hunt in. Roughly half of the 11,000 permits available overall had been sold by late last week.

State wildlife officials have touted the annual hunts as an important part of controlling the bear population and minimizing run-ins with humans.

New Jersey resumed state-regulated bear hunting in 2003 after a ban that lasted more than 30 years. Another hunt was held in 2005, and in 2010 the state instituted an annual hunt.

The state’s firearm-only season for bear hunting this year is scheduled for Dec. 4-9. Officials have the option to extend the bear hunt if the harvest objectives are not met.