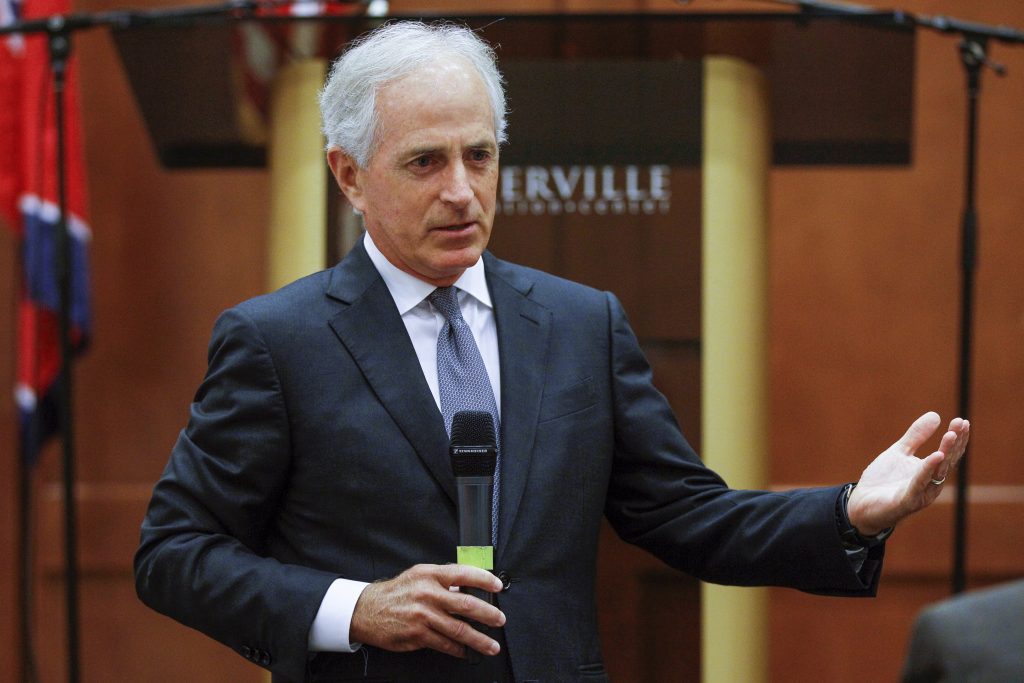 Sen. Bob Corker is hardly the only Republican leader lambasting Donald Trump and raising dark concerns about harm the president might cause the U.S. and the world.

“Cool it,” Sen. Chuck Grassley said in Iowa on Monday, delivering a message to both men. “And I think it would help if the president would be the first to cool it.”

Tennessee Sen. Corker, with his Twitter broadsides and his explosive weekend New York Times interview — he charged that Trump could set the nation “on the path to World War III” — gave voice to concerns that circulate widely on Capitol Hill about an unpredictable president whose tendency to personalize every issue creates risks for the nation.

But Trump’s enduring popularity with a segment of the GOP base serves as a political muzzle that keeps most elected Republicans from saying anything similar, even those who believe it to be true.

Grassley, who wouldn’t be up for re-election until 2022, responded bluntly when asked about the situation.

“I don’t see how it’s productive, and I think that two words would kind of answer your question from my point of view: Cool it … I think it would be better if we stuck to the issues and leave personalities out of it.”

A few other Republican senators who provided public views on Monday aligned themselves with Trump, not Corker.

For example, Montana’s Steve Daines’ office said simply that the senator “has confidence in the president.”

GOP Sen. John Barrasso disagrees with Corker, according to his office. Referring to Barrasso and Trump, the Wyoming senator’s office said, “On tax cuts, border security, and rebuilding American infrastructure, they fight the same fight.”

Barrasso is among the establishment Republicans who face potential primary challenges from pro-Trump activists on the right, heightening the political dangers if they should break with the president.

The Associated Press sought to contact all 52 Republican senators on Monday for their response to Corker’s comments and ask whether they believe Trump is fit for office, a question Corker declined to answer in the Times interview. With the Senate on recess this week and many offices closed for Columbus Day, the inquiries elicited few responses, and those who did largely declined comment.

Corker offered no solution to the problem he identified so graphically. Trump is the president, and few doubt that he will remain so.

Moreover, Republicans’ political fortunes remain tied to the president’s. They need his signature if they are to rescue a flagging agenda and pass a tax overhaul, a goal many believe is imperative if the GOP is to retain control of Congress in next year’s midterm elections. So unlike Corker, who recently announced he is not running for re-election in Tennessee, even GOP Trump critics will continue to mute their concerns about his behavior and try to work with the administration.

“Sen. Corker, who’s been a strong supporter of the president in the past, is essentially saying the emperor has no clothes,” said Michael Steel, who served as spokesman to former House Speaker John Boehner of Ohio.

But, Steel added, “The president was elected under our constitutional system and that’s where we stand. Congressional leaders are going to continue concentrating on doing everything they can to get big things done for the American people, and they hope to have as much support from the administration as possible.”

Senate Majority Leader Mitch McConnell of Kentucky, the target of Trump attacks after the Senate’s failure to pass health care legislation, didn’t directly answer when asked at an event in Hazard, Kentucky, whether he shared Corker’s sentiments.

“Sen. Corker is a valuable member of the Senate Republican caucus and he’s also on the Budget Committee and a particularly important player as we move to the floor on the budget next week,” McConnell said.

His comments underscored what has frustrated Republicans most about the Trump-Corker feud, which burst open Sunday when Trump began tweeting, inaccurately, that Corker had begged for his endorsement and decided not to run for re-election when Trump turned him down. Trump will need Corker if he is to get big tax changes through the Senate, where the narrow GOP majority thwarted McConnell’s efforts to repeal the Affordable Care Act. And Corker also figures to be a key player if Trump moves as expected to unwind the Iran nuclear deal.

Vice President Mike Pence, in a statement that never mentioned Corker, praised the president for “achieving real results on the international stage. While critics engage in empty rhetoric and baseless attacks.”

Republicans do frequently complain about Trump’s attacks on fellow Republicans like McConnell, his failure to stay focused on his legislative agenda and his tendency to make demands on Congress and then blame lawmakers for poor results. But those GOP comments are nothing like Corker’s apocalyptic statements.

For House Republicans, who face voters every two years and largely represent conservative districts where support for the president remains strong, there’s even less incentive to turn against the commander in chief. Sixty-eight percent of Republican voters approve of Trump, though that’s down from 80 percent in March, according to a recent AP-NORC poll.

Rep. Mark Meadows of North Carolina, chairman of the conservative House Freedom Caucus, criticized Corker, saying he finds “those type of comments to not be appropriate especially coming from the chairman of the Foreign Relations Committee, and certainly not in keeping with what I know of the way that things are conducted in the West Wing, having been there multiple times.”

“It’s really easy to be bold when you’re not coming back,” Meadows added of Corker.