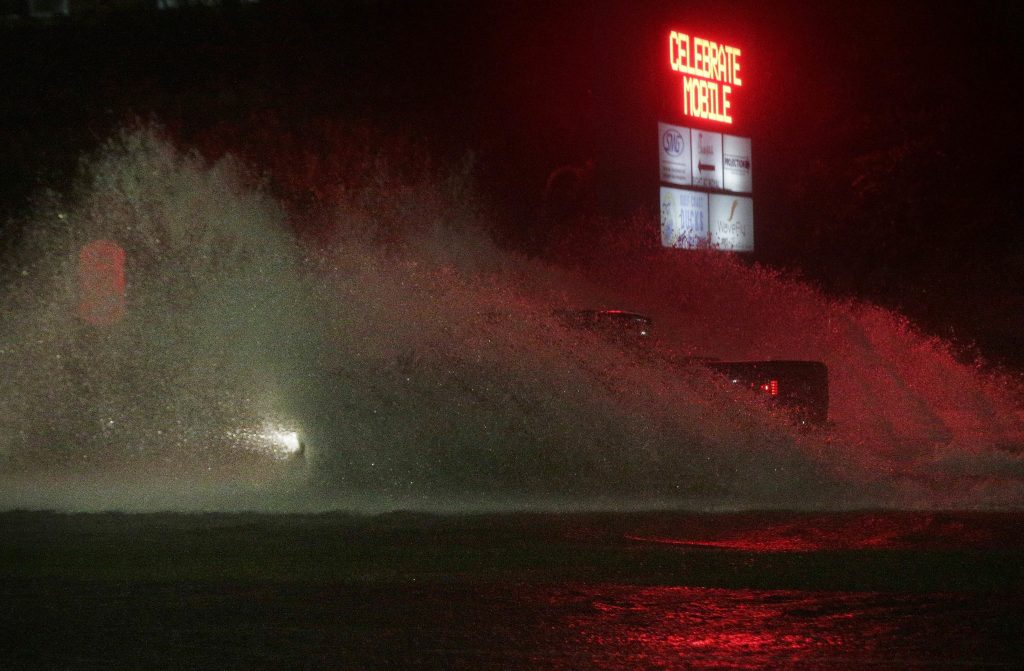 Hurricane Nate brought flooding and power outages as it sloshed ashore outside Biloxi early Sunday, the first hurricane to make landfall in Mississippi since Hurricane Katrina in 2005.

The storm hit the state with maximum sustained winds near 85 mph but weakened later to a tropical storm as it moved inland, the U.S. National Hurricane Center said.

At one point, Nate’s eye move over Keesler Air Force Base, where the National Hurricane Center’s hurricane hunter planes are kept, the center said.

It was Nate’s second landfall. Saturday night, the storm came ashore along a sparsely populated area in southeast Louisiana.

Nate’s powerful winds pushed water onto roads and its winds knocked out power to homes and business. But Nate didn’t have the intensity other storms — Harvey, Irma and Jose — had during this busy hurricane season, and people didn’t seem as threatened by it. No deaths or injuries were immediately reported.

As the midnight high tide approached in Biloxi, Nate’s storm surge pushed over the beachfront highway of U.S. 90 onto the peninsula that makes up the city’s eastern edge.

Thousands were without power in southern Mississippi. Outages were mostly concentrated on the eastern half of the state’s narrow coastal strip, in Harrison, Jackson and George counties.

Hurricane Katrina made its final landfall on the Mississippi coast on Aug. 29, 2005, leveling many cities and buckling bridges.

Katrina was the last hurricane that made a landfall on the Mississippi coast, although both Hurricane Gustav in 2008 and Hurricane Isaac in 2012 affected parts of the coast.

Nate passed to the east of New Orleans, sparing the city its most ferocious winds and storm surge. Its quick speed lessened the likelihood of prolonged rain that would tax the city’s weakened drainage pump system. The city was placed under a curfew, effective at 7 p.m., but the mayor lifted it about an hour after it had begun when it appeared the storm would pass by and cause little problem for the city.

Still, the streets were not nearly as crowded as they typically are on weekends and Mayor Mitch Landrieu asked people to shelter in place.

Cities along the Mississippi coast such as Gulfport and Biloxi were on high alert. Forecasters called for 3 to 6 inches with as much as 10 inches in some isolated places.

Nate weakened slightly and was a Category 1 storm with maximum winds of 85 mph when it made its first landfall in a sparsely populated area of Plaquemines (PLAK’-uh-minz) Parish.

Governors in Louisiana, Mississippi and Alabama declared states of emergency. The three states have been mostly spared during this hectic hurricane season.

“This is the worst hurricane that has impacted Mississippi since Hurricane Katrina,” Mississippi Emergency Management Director Lee Smithson said. “Everyone needs to understand that, that this is a significantly dangerous situation.”

“It’s going to hit and move through our area at a relatively fast rate, limiting the amount of time it’s going to drop rain,” Edwards said. “But this is a very dangerous storm nonetheless.”

Some people worried about New Orleans’ pumping system, which had problems during a heavy thunderstorm on Aug. 5. The deluge exposed system weaknesses – including the failure of some pumps and power-generating turbines – and caused homes and businesses to flood. Repairs have been made but the system remained below maximum pumping capacity.

“Hurricane Nate is expected to bring life-threatening storm surges, strong winds and tornadoes that could reach across the Panhandle,” Scott said. The evacuations affect roughly 100,000 residents in the western Panhandle.