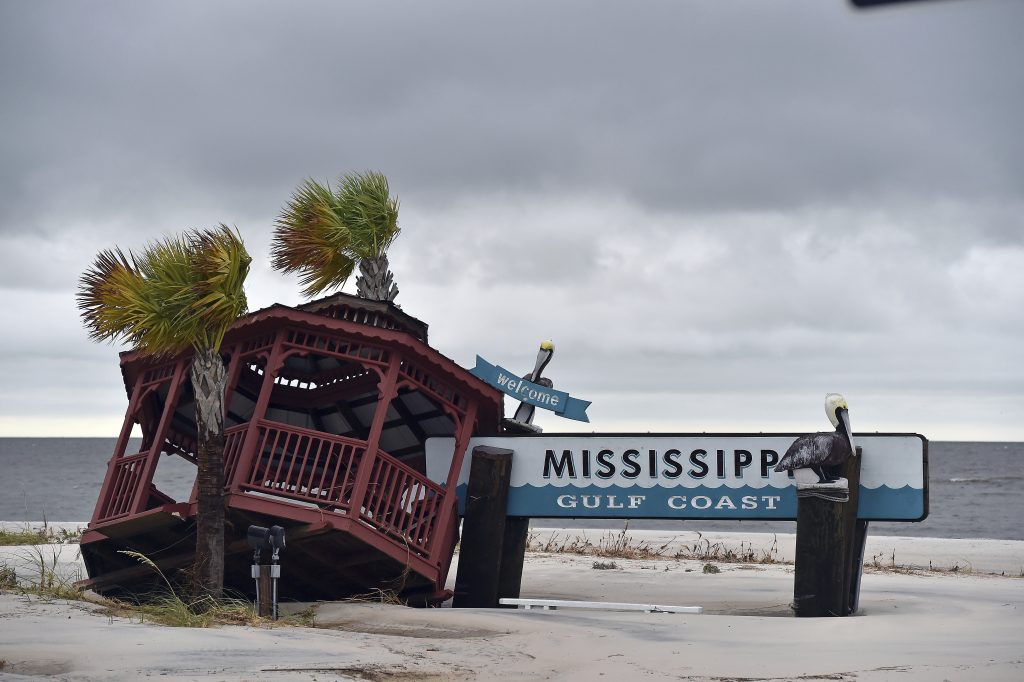 (AP) — Hurricane Nate brought a burst of flooding and power outages to the U.S. Gulf Coast before weakening rapidly Sunday, sparing the region the kind of catastrophic damage left by a series of hurricanes that hit the southern U.S. and Caribbean in recent weeks.

Nate — the first hurricane to make landfall in Mississippi since Katrina in 2005 — quickly lost strength, with its winds diminishing to a tropical depression as it pushed northward into Alabama and toward Georgia with heavy rain. It was a Category 1 hurricane when it came ashore outside Biloxi early Sunday, its second landfall after initially hitting southeastern Louisiana on Saturday evening.

The storm surge from the Mississippi Sound littered Biloxi’s main beachfront highway with debris and flooded a casino’s lobby and parking structure overnight.

By dawn, however, Nate’s receding floodwaters didn’t reveal any obvious signs of widespread damage in the city where Hurricane Katrina had leveled thousands of beachfront homes and businesses.

No storm-related deaths or injuries were immediately reported.

Mississippi Gov. Phil Bryant praised state and local officials and coastal residents for working together to avoid loss of life.

Lee Smithson, director of the state emergency management agency, said damage from Nate was held down in part because of work done and lessons learned from Katrina.

“If that same storm would have hit us 15 years ago, the damage would have been extensive and we would have had loss of life.” Smithson said of Nate. “But we have rebuilt the coast in the aftermath of Katrina higher and stronger.”

Nate knocked out power to more than 100,000 residents in Mississippi, Alabama, Louisiana and Florida, but crews were working on repairs.

As of Sunday afternoon, Alabama Power said more than 62,000 customers remained without power, while utilities and cooperatives in Mississippi said more than 21,000 were without electricity. In Louisiana, there were scattered outages during the storm, while Florida Gov. Rick Scott said 6,800 customers had lost power in his state.

Mississippi’s Gulf Coast casinos got approval to reopen in mid-morning after closing Saturday as the storm approached.

Sean Stewart, checking on his father’s sailboat at a Biloxi marina after daybreak, found another boat had sunk, its sail still fluttering in Nate’s diminishing winds. Stewart was relieved to find his father’s craft intact.

Before Nate sped past Mexico’s Yucatan Peninsula late Friday and entered the Gulf of Mexico, it drenched Central America with rains that left at least 22 people dead. But Nate didn’t approach the intensity of Harvey, Irma and Maria — powerful storms that left behind massive destruction during 2017’s exceptionally busy hurricane season.

“We are thankful because this looked like it was going to be a freight train barreling through the city,” said Vincent Creel, a spokesman for the city of Biloxi.

The head of the Federal Emergency Management Agency (FEMA) said the four hurricanes that have struck the U.S. and its territories this year have “strained” resources, with roughly 85 percent of the agency’s forces deployed.

“We’re still working massive issues in Harvey, Irma, as well as the issues in Puerto Rico and the Virgin Islands, and now this one,” FEMA Administrator Brock Long told ABC.

Nate initially made landfall Saturday evening in Louisiana, but fears that it would overwhelm the fragile pumping system in New Orleans proved to be unfounded. The storm passed to the east of New Orleans, and Mayor Mitch Landrieu lifted a curfew.

“Hurricane Nate had the potential to wreak havoc on Louisiana, but thankfully, we were largely spared major damage,” Gov. John Bel Edwards said in a statement.

In Alabama, Dauphin Island Mayor Jeff Collier said he woke up around 3 a.m. Sunday to discover knee-deep water in his yard. Although some homes and cars on the island had flooded, Collier said he hadn’t heard of anyone needing rescue.

“We didn’t think it would be quite that bad,” he said. “It kind of snuck up on us in the wee hours of the morning.”

At landfall in Mississippi, the fast-moving storm had maximum sustained winds near 85 mph, the National Hurricane Center in Miami said. Nate steadily weakened after its first landfall in a sparsely populated area of Plaquemines Parish, Louisiana.

At 5 p.m. EDT, the center of Nate was about 75 miles south of Nashville, Tennessee. Nate was expected to bring 3 to 6 inches of rain to the Deep South, eastern Tennessee Valley and southern Appalachians through Monday. The Ohio Valley, central Appalachians and Northeast could also get heavy rain before the storm exits Maine on Tuesday.

Biloxi city employees worked before dawn to clear Highway 90, where sand, logs and even a large trash bin had been washed onto the four-lane, beachfront road. Despite the debris, there was little to no visible damage to structures. A handful of businesses had reopened before dawn, and the storm surge that washed across the highway had receded by 6 a.m.

Mississippi DOT crews had to remove over 1,000 pumpkins blown onto Highway 90 in Pass Christian, west of Gulfport.

Willie Cook, 75, spent his morning chopping down a pecan tree that fell in his backyard. He said Nate was nothing like Katrina, which pushed 8 feet of water into his east Biloxi house.

“The wind was blowing, but it wasn’t too rough,” Cook said of Nate.

“Thankfully, right now we have no major damage reports,” he said.

“We turned out fairly good,” he said as he prepared to survey neighborhoods.

In Alabama, the storm flooded homes and cars on the coast and inundated at least one major road in downtown Mobile.

At sunrise in Pensacola Beach, Florida, a small front-end loader scraped sand off a parking lot and returned it to the nearby beach.

On Saturday night, about 6 inches of salt water began flowing through Anthony Perez’s garage and a ground-level room of his Pensacola Beach condo along Santa Rosa Sound. The entire building was still surrounded by water on Sunday morning.

“I went downstairs and said, ‘Uh! There it is! It’s already flowing through,'” Perez said.

Officials rescued five people from two sailboats in choppy waters before the storm — two people from a sailboat in Lake Pontchartrain and three who were in the water after a boat hit rocks in the Mississippi Sound.