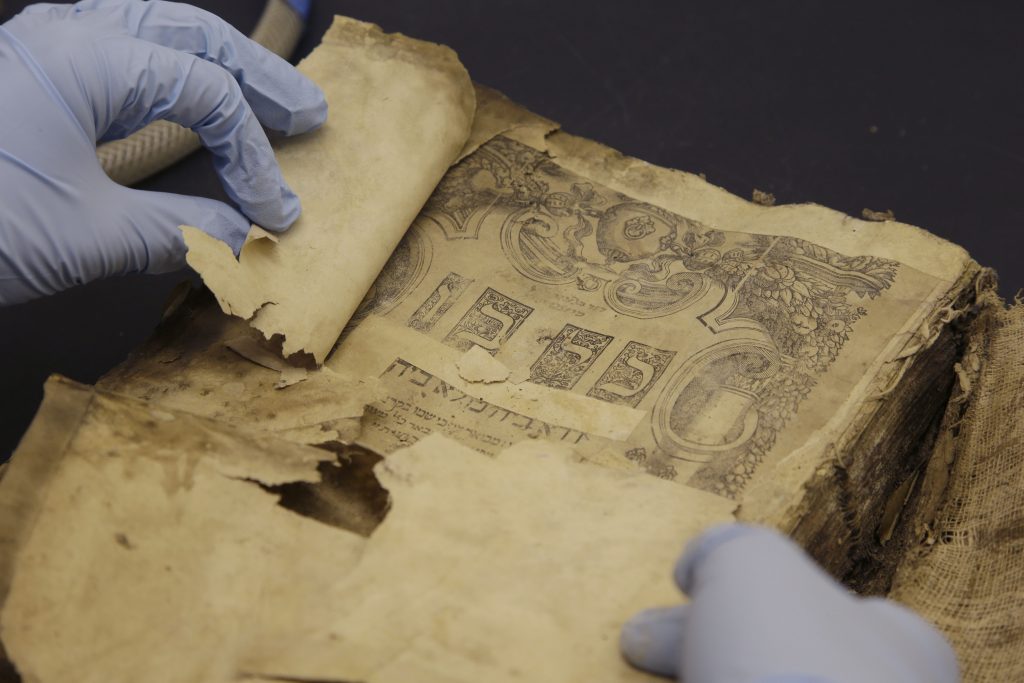 Sen. Charles Schumer, D-N.Y., is requesting that the State Department not return to the Iraqi government thousands of Jewish artifacts that were seized from the Iraqi Jewish community, but give them to Jewish communities instead.

In 2003, American soldiers discovered 2,700 Jewish books and tens of thousands of documents in a flooded government intelligence building in Baghdad, Iraq. The items — including a Chumash with commentaries from 1568, a Talmud Bavli from 1793 and a Zohar from 1815 — had belonged to shuls and Jewish organizations in Baghdad.

After suffering anti-Semitic attacks in the 1940’s, many Iraqi Jews left the country. Between 1950 and 1952, over 130,000 Jews fled; each was allowed to carry just one suitcase. The fleeing communities left sifrei Torah and tashmishei kedushah in a shul in Baghdad. In 1984, Saddam Hussein seized the items from the shul, and they were discovered 19 years later by the U.S. forces.

The items were brought to the U.S., and the American government spent $3 million on preservation.

In 2013, the Jewish community buried some shaimos parchment fragments from a sefer Torah and a Megillas Esther, which had been ruined by the flooding and mold, in a Long Island cemetery.

The State Department had been scheduled to return the items to the Iraqi government in 2014. Following intervention by Schumer, the U.S. was allowed to keep the items for another four years, until September 2018.

Now, with the deadline one year away, Schumer is seeking to have the items permanently transferred to the Jewish community.

“This collection does not belong to the Iraqi government,” said Schumer. “It belongs to the ancient and proud Iraqi Jewish community — many now here in the States — that was exiled many years ago and forced to leave their belongings behind.

“After the United States preserved this ancient collection, it makes no sense to return the items to the Iraqi government, where they will no longer be accessible to the Jewish community. Therefore, I am once again urging the State Department to do everything in their power to ensure that these treasured artifacts remain available and accessible to Jews worldwide.”

On Tuesday, Schumer sent a letter to Secretary of State Rex Tillerson, asking him to transfer the items to the Jewish community. Below is the full text of the letter:

I write today out of deep concern over the recently reported decision to return over 2,700 pieces of Iraqi Judaica to Iraq next year. Four years ago, I urged then-Secretary of State John Kerry to delay and ultimately prevent the Iraqi Jewish Archive from returning to Iraq in 2014, the initial return deadline for the collection. Thankfully, after my urging, the deadline was postponed, however, the new deadline is now September 2018. These treasured artifacts belong to the Jewish community and, therefore, I am renewing my call for these artifacts to remain available and accessible to Jews worldwide – especially the exiled Iraqi Jewish community.

In 2003, American soldiers found the collection of Iraqi Judaica in a flooded Baghdad Intelligence Center, and the United States has spent over $3 million dollars preserving the collection. The collection, which includes partial Torah parchments and ancient prayer books, had been seized by Saddam Hussein’s troops and belonged to members of the exiled Iraqi Jewish community. Specifically, this priceless collection of Judaica consists of a Hebrew Bible with commentaries from 1568, a Babylonian Talmud from 1793, a Torah scroll fragment from Genesis, a Zohar from 1815 and other sacred ritual objects.

Items in the collection were seized by Saddam Hussein in 1984 from a Baghdad synagogue. Iraqi Jews placed the collection there during their mass exodus in the early 1950s. In the 1940s, outbreaks of anti-Jewish rioting occurred and in 1948, Zionism was made a capital crime. Between 1950-1952, more than 130,000 Jews left Iraq and were not allowed to carry more than one suitcase each. When the United States attempted to assist Iraqi Jews who wished to leave Iraq after the U.S. invasion in 2003, just 34 Jews were found in the entire country – a mere shadow of a 2,500 year old community which at its height numbered over 130,000 people.

These items belong to the people who were forced to leave them behind when the Iraqi government chose to exile them from their homes. Since the exile of Jews from Iraq virtually no Jewish life remains in the country – this treasured collection belongs to the Jewish community and should be made available to them. I strongly urge you to reconsider your decision to return these artifacts to the Iraqi government next year and urge you to work with Jewish organizations and the Iraqi Jewish community both in the United States and abroad to find a location to store and display these cherished items in a manner which respects their history.