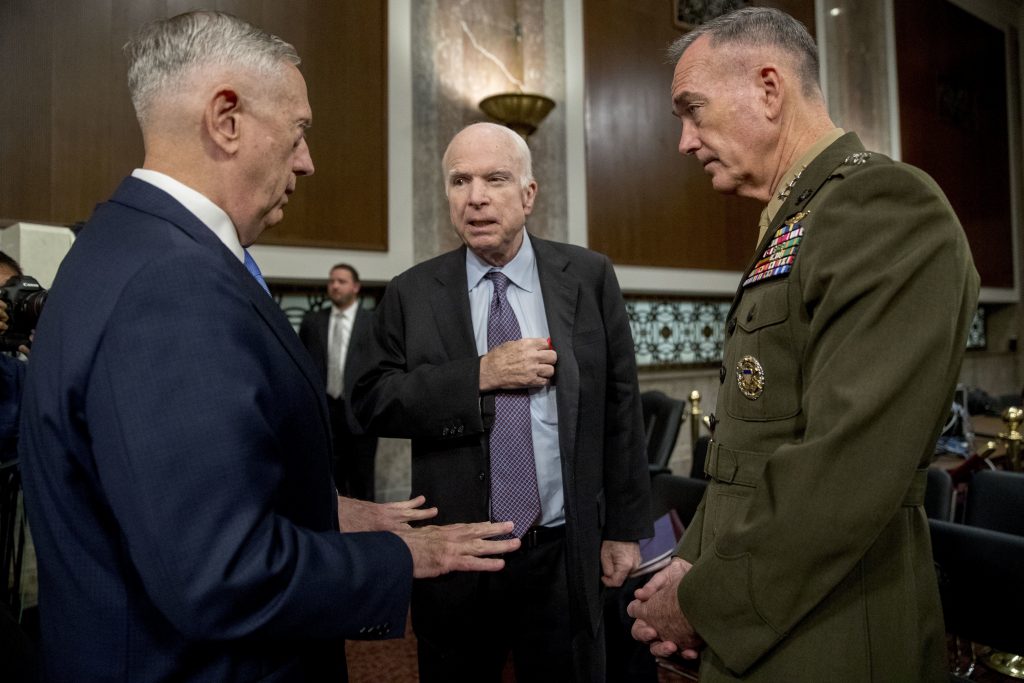 Defense Secretary Jim Mattis told lawmakers Tuesday that the Afghanistan security forces are fully engaged in combat military operations for the first time during the 16-year-old war and are suffering fewer casualties as they continue to improve their competence on the battlefield.

Mattis said that the Afghan forces are becoming bolder in combat because they know U.S. and NATO forces are using airpower to strike the Taliban and other terrorists on “the high ground.” That frees up the Afghans to “take the fight to the enemy,” Mattis said.

Sen. John McCain, R-Ariz., the chairman of the Armed Services Committee, lectured Mattis and Dunford at the opening of the hearing for failing to provide lawmakers with detailed information about Pres. Trump’s strategy.

McCain declared that it was “bizarre” that Mattis and Dunford, the chairman of the Joint Chiefs of Staff, did not submit written testimony before the hearing started. That’s common practice for administration witnesses testifying before congressional committees.

“We want to be your partners,” McCain said. “But this committee will not be a rubber stamp for any policy or president. We must be well-informed. We must be convinced of the merits of the administration’s actions. And unfortunately, we still have far more questions than answers about this new strategy.”

Mr. Trump unveiled his new strategy for Afghanistan in August and said American troops would “fight to win” by attacking enemies, “crushing” al-Qaida, and preventing terrorist attacks against Americans. But Mr. Trump’s description of a win in Afghanistan notably did not include defeating the Taliban. He indicated that after an effective military effort it eventually may be possible to reach a political settlement in Afghanistan that includes elements of the Taliban.

Although Mr. Trump insisted he would not talk about numbers of troops, he hinted he would embrace the Pentagon’s proposal to boost troop numbers by nearly 4,000, augmenting the roughly 8,400 Americans currently stationed there. Mattis told the committee that more than 3,000 additional American forces will be arriving in the coming months to expand the training of the Afghan forces. The combined U.S. and NATO troop contingent currently in the country is about 13,500.

Mr. Trump also singled out Pakistan for harboring Taliban leaders and other terrorists that are battling American troops in Afghanistan. Mr. Trump’s tough words about Pakistan, a troubled U.S. security partner, infuriated Islamabad, which has denied the country provides safe havens for the Taliban.

But U.S. officials and analysts have long said Pakistan tolerates the presence of the Afghan Taliban and the allied Haqqani network, which are leading the insurgency against Afghan and U.S. forces.

The administration said last month that it was holding up the release of $255 million in military assistance for Pakistan until it cracked down on terrorist groups that threaten Afghanistan.