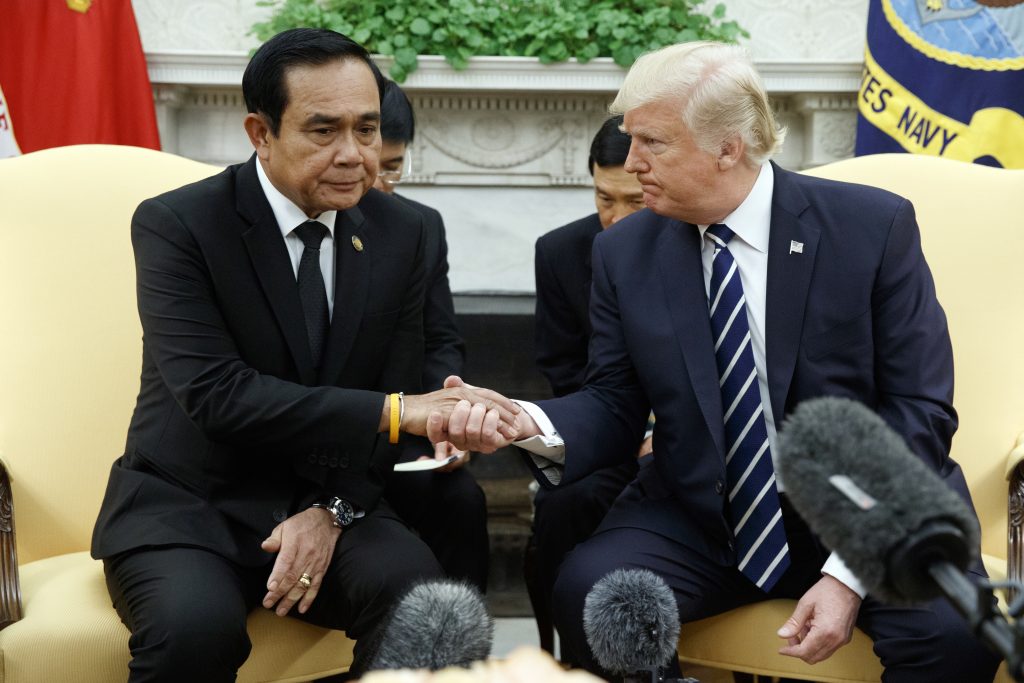 Making no reference to Thailand’s military rule, President Donald Trump on Monday hailed strengthening relations with America’s oldest ally in Asia as he welcomed a junta leader who took power in a coup.

Prayuth and his wife, Naraporn Chan-ocha, were greeted at the South Portico by Trump and first lady Melania Trump as the Thai leader arrived for talks and a working lunch. The visit came three years after Prayuth seized power, and days after the elected leader whose government he ousted was sentenced in absentia to five years in prison.

“We’ve had a long and very storied history with Thailand,” Trump said in the Oval Office alongside Prayuth, referring to a nearly two-century diplomatic relationship, which the president said has advanced since he took office in January.

“So we have a very strong relationship right now, as of this moment, and it’s getting stronger in the last nine months,” he said, stressing the importance of trade ties, which totaled $40 billion last year, with the U.S. running a $19 billion deficit. “I think we’re going to try and sell a little bit more to you now, make that a little bit better if that’s possible.”

Prayuth said visiting Trump was a great opportunity for his government and the Thai people. He expressed optimism about strengthening cooperation, including in defense and security “to help ensure that our citizens are safeguarded from terrorism and other threats.” He also said the two nations would work closely on “regional issues of concern.”

“I am confident that with the president’s leadership, we will be able to tackle all those problems,” he said.

Human rights groups have opposed the visit of Prayuth. He took power in 2014 to restore order after violent political turmoil in Thailand. The unrest has abated, but the junta has squelched dissent and dragged its feet on holding elections in what was once one of the most vibrant democracies in Asia. Political parties are restricted, and elections are not expected before 2018.

After the coup, the United States under President Barack Obama stopped military assistance and training programs — a largely symbolic step but one that went down badly with Bangkok, a U.S. treaty ally that has moved closer to China as relations with Washington have strained. Under Trump, the U.S. has looked to resume high-level ties and authorize more arms sales.

A U.S. National Security Council spokesman, who was not authorized to speak publicly on planning for the visit and requested anonymity, said the U.S. will continue to urge Thailand to return to participatory democracy and restore civil liberties. He declined to say whether those points would be raised by Trump, but said the president could discuss how to strengthen U.S.–Thai relations.

It’s not that unusual for U.S. presidents to meet autocrats in the Oval Office, but coup leaders are more contentious.

Perhaps the closest recent comparison to Prayuth would be former Pakistani army chief Gen. Pervez Musharraf, who emerged as a close ally of President George W. Bush in the war on terror. Musharraf first visited the White House in 2002, three years after he seized power from an elected leader and before he’d rammed through a national referendum to endorse his presidency.

Trump has barreled through criticism about outreach to authoritarian foreign leaders as he looks to shore up America’s long-standing alliances.

He praised Philippine President Rodrigo Duterte for his deadly war on drugs that has left thousands dead, according to a leaked transcript of an April phone call. In the same month, Trump welcomed Egyptian President Abdel-Fattah el-Sissi to the White House — something that Obama avoided. El-Sissi took power in a 2013 coup and later was elected president.

A Thai court sentenced former Prime Minister Yingluck Shinawatra, whose government was ousted in the coup, to five years in prison for alleged negligence in a money-losing rice subsidy program. Yingluck fled the country before the verdict. She says she is innocent, and her supporters call the charges against her politically motivated.

John Sifton of Human Rights Watch predicted that there wouldn’t be substantial discussion on human rights on Monday. “Trump praises autocratic leaders over the world with little comment on their abuses,” Sifton said.

Walter Lohman at the right-leaning Heritage Foundation said if Trump did raise democracy with Prayuth, it would be behind the scenes, which he argued would be most effective with a country sensitive to foreign criticism.

“We need to be concerned about human rights and democracy, but it can’t dictate our relationships with our allies,” Lohman said.