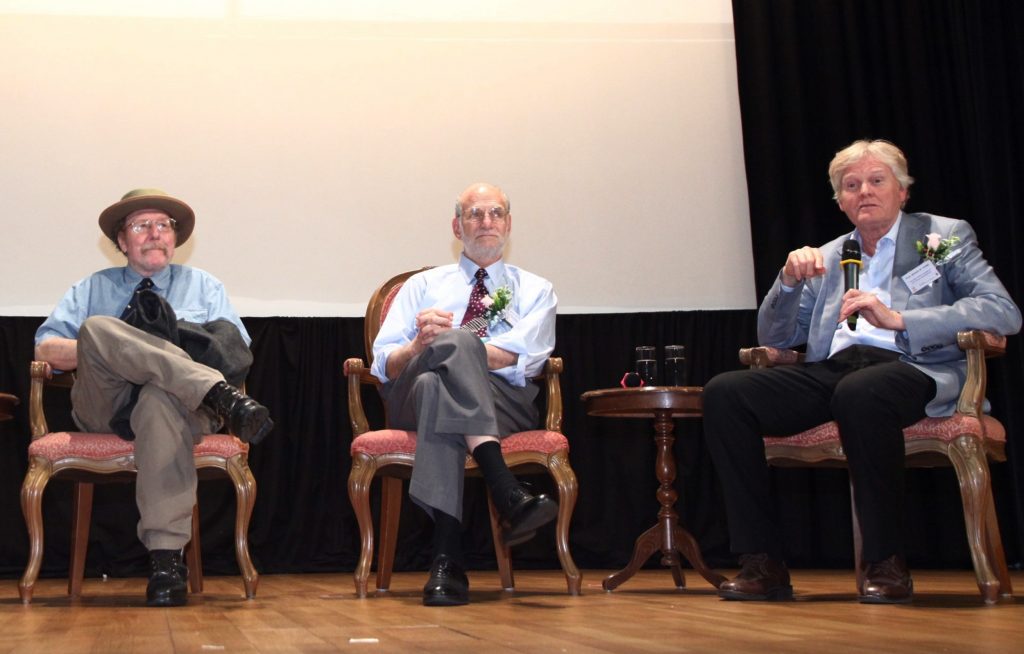 Three Americans — Jeffrey C. Hall, Michael Rosbash and Michael W. Young — have won the 2017 Nobel Prize in physiology or medicine for their work on molecular mechanisms that control circadian systems.

In announcing the winner in Stockholm on Monday, the prize committee said the scientists elucidated how a life-form’s “inner clock” can fluctuate to optimize our behavior and physiology. “Their discoveries explain how plants, animals and humans adapt their biological rhythm so that it is synchronized with the Earth’s revolutions.”

Working with fruit flies, the scientists isolated a gene that is responsible for a protein that accumulates in the night, but is degraded in the day. Misalignments in this clock may play a role in medical conditions and disorders, as well as the temporary disorientation of jet lag that travelers experience when crisscrossing time zones.

Those “genes make up the mechanics by which organisms can keep track of time, and this allows them — just like your wristwatch — to coordinate their behavior and their sleep-wake cycle with the changes in the light-dark cycle,” explained Erin O’Shea, president of the Howard Hughes Medical Institute and who has researched the circadian clock of a type of aquatic bacteria.

“The circadian system has its tentacles around everything,” Rosbash said in an interview with the HMI Bulletin in 2014. “It’s ticking away in almost every tissue in the human body.” It’s also in plants, including major food crops, the article noted, and appears to be tied to “disease susceptibility, growth rate and fruit size.”

The trio’s early work took place in 1984 when Hall and Rosbash worked together at Brandeis and Young at Rockefeller University to isolate the “period” gene, which controls the circadian rhythm of fruit flies. Hall and Rosbash then showed that the level of the protein encoded by this gene changes in a 24-hour cycle, going up during the day and down at night. They theorized that this protein blocked the activity of the period gene.

But to have this effect, the protein would have to reach the genetic material in the cell nucleus, and no one was able to figure out how it got there until Young, in 1994, discovered a second clock gene, now known as “timeless.” He showed that when the protein encoded by timeless bound to the protein made by the gene period, they were able to enter the cell nucleus. He further identified a third gene, “doubletime,” which appeared to control the frequency of the oscillations over a 24-hour period.

Researchers in the field of circadian biology — or “chronobiology,” as it is nicknamed — said Monday morning that the scientists’ work is having a major on our understanding of human health and medicine. Alzheimer’s, depression, attention-deficit/hyperactivity disorder (ADHD), heart disease, obesity and diabetes and other metabolic issues are among the many conditions that appear to be linked to circadian rhythms being out of whack.

Erol Fikrig, a researcher at Yale University who is studying whether the timing of insect bites impacts our ability to fight off diseases like dengue fever or Lyme disease, explained that our immune system, too, “is influenced by circadian, which can alter our ability to fight infections.”

This year’s winners probably weren’t in a lot of Nobel Prize betting pools, because the medicine Nobel is notoriously hard to predict. In fact, during a news conference at which the awards were announced, a member of the Nobel Assembly at Karolinska Institutet said that when he informed Rosbash that he had received the award, his response was, “You are kidding me.”

The highly secretive Nobel committee does not release a list of those under consideration for its awards and never has in its 116-year history. The names being thrown around as deserving of the prize in the weeks before the announcement is always very long and highly speculative. David Pendlebury, formerly of Thomson Reuters and now with Clarivate Analytics, bases his picks on an extensive data analysis and has an impressive track record of correctly picking numerous Nobel Laureates over the past 15 years (although not always in the right year).