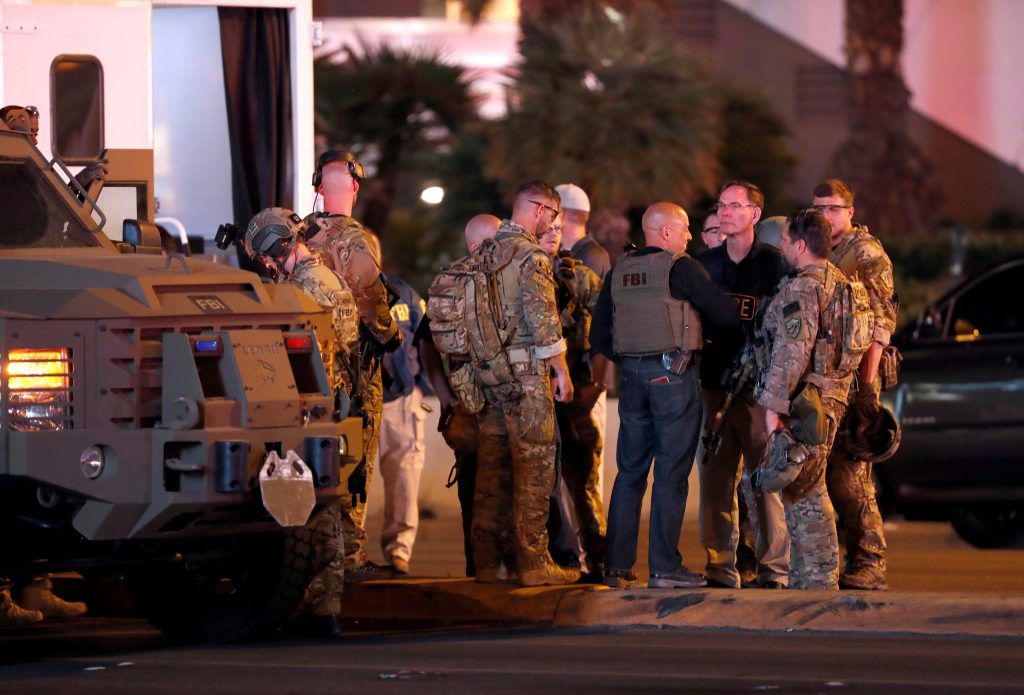 A gunman perched on the 32nd floor of a Las Vegas casino unleashed a shower of bullets on an outdoor country-music festival below, killing 59 people as tens of thousands of concertgoers screamed and ran for their lives. 527 people were injured, authorities said, including 150 in critical condition.

The death toll would make the mass shooting the deadliest in U.S. history, eclipsing last year’s massacre of 49 people at an Orlando venue by a gunman who pledged allegiance to Islamic State terrorists.

Some 22,000 people were in the crowd when a man police identified as Stephen Craig Paddock, 64, of Mesquite, Nevada, opened fire, sparking a panic in which some people trampled on others, as law enforcement officers scrambled to locate the gunman.

Paddock killed himself before police entered the hotel room he was firing from, Clark County Sheriff Joseph Lombardo told reporters.

“We have no idea what his belief system was,” Lombardo said.

A senior U.S. government official told Reuters that Paddock’s name was not on any database of suspected terrorists.

Later, Islamic State claimed responsibility for the shooting, and said the attacker had converted to Islam a few months ago.

“The Las Vegas attack was carried out by a soldier of the Islamic State and he carried it out in response to calls to target states of the coalition,” the group’s news agency Amaq said, in reference to the U.S.-led coalition fighting the group in the Middle East. “The Las Vegas attacker converted to Islam a few months ago,” Amaq added.

But the FBI said that it has thus far found no connection between the shooter and IS. “We have determined to this point no connection with the international terrorist group. We will continue to work with our partners to ensure that this is factually, thoroughly, and absolutely investigated to be able to bring comfort and peace back to this community.”

Lombardo said there were more than 10 rifles in the room where Paddock killed himself after checking into the hotel on Thursday.

As sunrise approached, police were still finding people who had taken cover during the attack, Lombardo said.

“It’s going to take time for us to get through the evacuation phase,” Lombardo said.

SWAT teams quickly descended on the concert and the casino, and officers used explosives to get into the hotel room where the suspect was inside, authorities said.

“What we are going to try to do as best we can is to get our first responders back on their feet and responding and conducting a proper investigation to ensure that we have the safety of this community at heart,” Sheriff Joseph Lombardo said.

In addition to Paddock, police said they located a woman who may have been connected to the attack — Marilou Danley, 62. Lombardo said they believe this was a “lone wolf” attack.

Police shut down the usually busy Las Vegas Boulevard and authorities across the state and federal ranks converged on the scene as dozens of ambulances ferried those struck by gunfire. Nearby Interstate 15 and flights at McCarran International Airport were briefly closed.

Hospital emergency rooms were jammed with victims delivered by ambulance. Others loaded the wounded into their cars and drove them to hospitals.