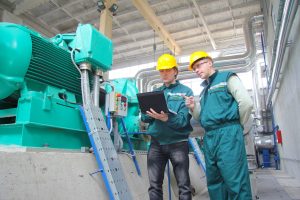 A measure of U.S. manufacturing activity surged to a near 13-1/2-year high in September as disruptions to the supply chains caused by Hurricanes Harvey and Irma resulted in factories taking longer to deliver goods and boosted raw material prices.

“Much of the gain is presumably linked to the aftereffects of the hurricanes. Nonetheless, manufacturing growth is strong,” said John Ryding, chief economist at RDQ Economics in New York.

ISM said its index of national factory activity surged to a reading of 60.8 last month, the highest reading since May 2004, from 58.8 in August. A reading above 50 in the ISM index indicates an expansion in manufacturing, which accounts for about 12 percent of the U.S. economy.

The ISM said Harvey and Irma had caused supply chain and pricing issues in the chemical products sector. There were also concerns about the disruptive impact of the storms on the food, beverage and tobacco products industries.

Manufacturers of nonmetallic mineral products said that while the storms were boosting sales, they were also causing significant price increases on input raw materials.

As a result, the ISM’s supplier deliveries sub-index soared 7.3 points to 64.4 last month. A lengthening in suppliers’ delivery time is normally associated with increased activity, which is a positive contribution to the ISM index.

Discounting the hurricanes’ impact, the outlook for manufacturing remains bullish. Seventeen out of the 18 manufacturing industries reported growth last month.

The ISM survey’s production sub-index rose 1.2 points to a reading of 62.2 in September, and a gauge of new orders jumped to 64.6 in September from 60.3 in August.

Factories also reported that customers’ inventories remained at levels considered “too low” last month. The ISM said that this was an indication that “downstream customers continue to operate at a high level of demand that production cannot fully satisfy.”

The ISM said its measure of factory employment increased 0.4 point to 60.3, the highest since June 2011.

U.S. financial markets viewed the data as supportive of an interest rate hike from the Federal Reserve in December. The U.S. central bank has increased borrowing costs twice this year.

The dollar firmed against a basket of currencies, while prices for U.S. Treasuries were largely unchanged. Stocks on Wall Street hovered near record highs.

“While this is survey sentiment data rather than harder manufacturing production data, it does indicate the economic expansion is very much intact despite the short-term disruptions due to the hurricanes,” said Scott Anderson, chief economist at Bank of the West in San Francisco.

Harvey and Irma are expected to chop off as much as six-tenths of a percentage point from gross domestic product growth in the third quarter. Harvey, which pummeled Texas at the end of August, has undercut consumer spending and weighed on industrial production, homebuilding and home sales.

The government said Harvey and Irma did not appear to have impacted the construction spending data as the responses from the Texas and Florida areas affected by the storms were “not significantly lower than normal.”