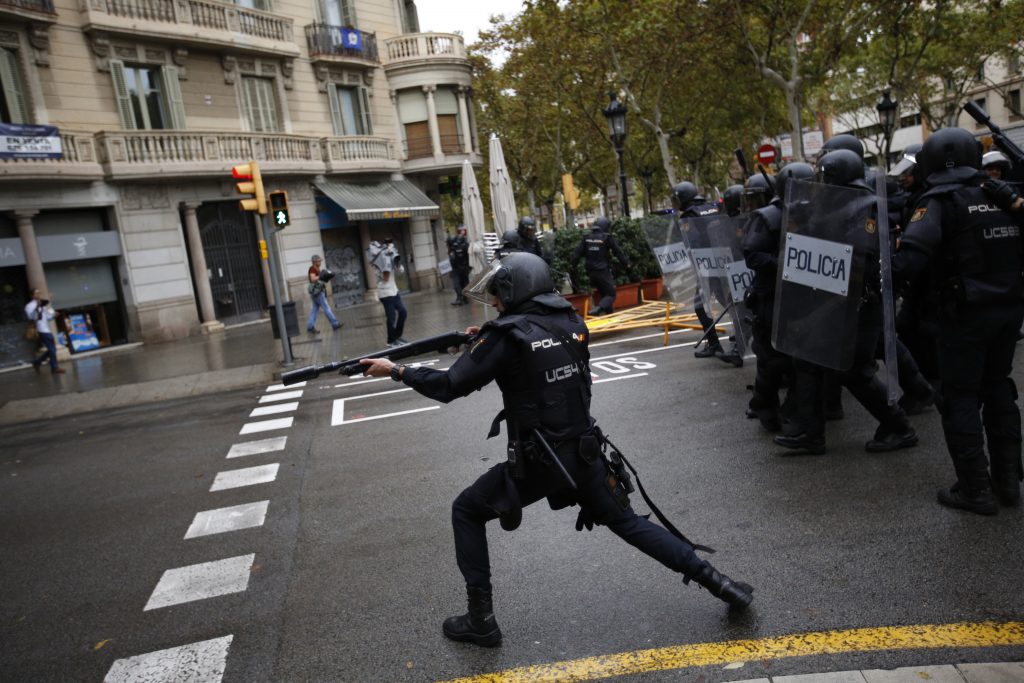 Spanish riot police smashed their way into polling stations to try to halt a disputed independence referendum on Sunday and fired rubber bullets at protesters outside a Barcelona polling station. Several people were injured.

The officers fired the rubber bullets while trying to clear protesters who were trying to prevent National Police cars from leaving after police confiscated ballot boxes from the voting center. The Spanish government has ordered police to stop the voting process, saying it’s illegal.

An AP photographer saw several people who had been injured during the scuffles outside Barcelona’s Rius i Taule school, where some voters had cast ballots before police arrived. Catalan officials said 38 people were treated for mostly minor injuries.

Manuel Conedeminas, a 48-year-old IT manager who tried to block police from driving away with the ballot boxes, said agents had kicked them before using their batons and firing the projectiles, which were ball-shaped.

Elsewhere, Civil Guard officers, wearing helmets and carrying shields, used a hammer to break the glass of the front door and a lock cutter to break into the Sant Julia de Ramis sports center near the city of Girona. At least one woman was injured outside the building and wheeled away on a stretcher by paramedics.

Clashes broke out less than an hour after polls opened, and not long before Catalonia regional president Carles Puigdemont was expected to turn up to vote at the sports center. Polling station workers inside the building reacted peacefully and broke out into songs and chants challenging the officers’ presence.

Puigdemont was forced to vote in Cornella de Terri, near the northern city of Girona, his spokesman Joan Maria Pique told The Associated Press.

The Spanish government and its security forces are trying to prevent voting in the independence referendum, which is backed by Catalan regional authorities. Spanish officials had said force wouldn’t be used, but that voting wouldn’t be allowed.

Spain’s Constitutional Court has suspended the vote. Regional separatist leaders pledged to hold it anyway, promising to declare independence if the “yes” side wins, and have called on 5.3 million eligible voters to cast ballots.

Police had sealed off many voting centers in the hours before the vote to prevent their use. Others were filled with activists determined to hold their ground.

Spanish riot police forcefully removed a few hundred would-be voters from a polling station at a school in Barcelona.

National Police and Civil Guard officers also showed up in other polling centers where Catalan officials were expected.

Reporters with The Associated Press saw ballot boxes wrapped in plastic bags being carried into some of the polling stations in Barcelona occupied by parents, children and activists before some polling stations could open at 9 a.m. (local time) as scheduled.

The plastic ballot boxes, bearing the seal of the Catalan regional government, were placed on tables, prompting the cheering of hopeful voters who had gathered in schools before dawn.

In an effort to overcome myriad obstacles, Catalan officials announced that voters would be allowed to cast ballots in any location and could use ballots printed at home, rather than in designated polling stations as previously announced.

Regional government spokesman Jordi Turull also said that a group of “academics and professionals” would serve as election observers. The official electoral board appointed by the regional parliament was disbanded last week to avoid hefty fines by Spain’s Constitutional Court.

“We are under conditions to be able to celebrate a self-determination referendum with guarantees,” Turull said in a press conference. “Our goal is that all Catalans can vote.”

Tension has been on the rise since the vote was called in early September, crystalizing years of defiance by separatists in the affluent region, which contributes a fifth of Spain’s economy ($1.32 trillion). As one of Spain’s 17 autonomous regions, Catalonia enjoys ample autonomy but key areas such as infrastructure and taxes are in the hands of Madrid. Separatist Catalans have long complained of contributing too much to the state while not getting enough in return.

Courts and police have been cracking down for days to halt the vote, confiscating 10 million paper ballots and arresting key officials involved in the preparations. On Saturday, Civil Guard agents dismantled the technology to connect voting stations, count the votes and vote online, leading the Spanish government to announce that holding the referendum would be “impossible.”