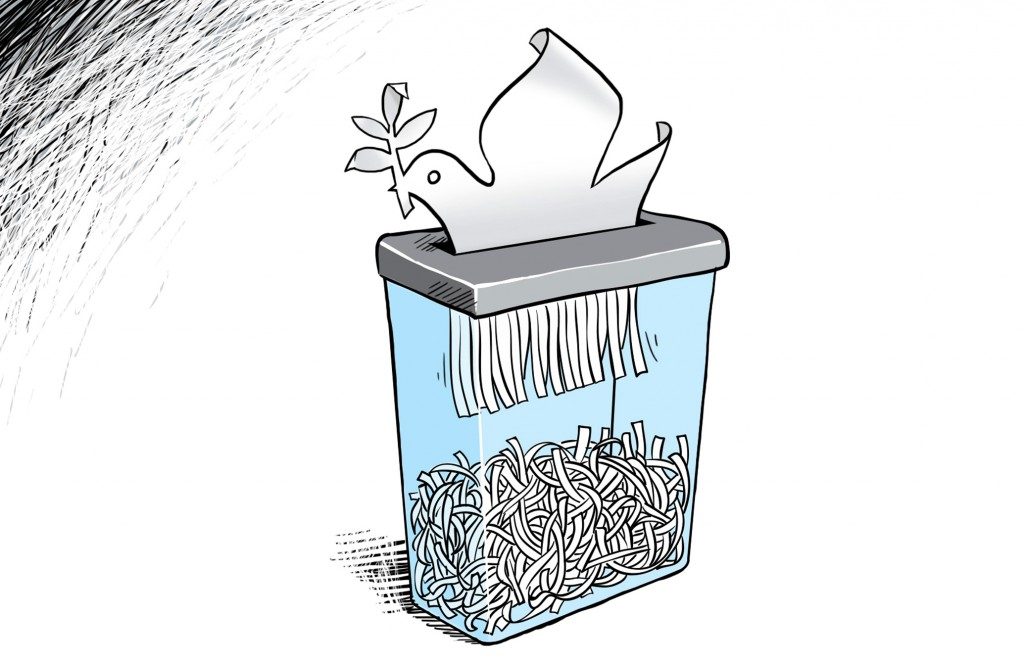 When three Israelis were murdered in a terror attack last week in Har Hadar, a bucolic Jewish community near Telzstone, just outside of Yerushalayim, CNN couldn’t bring itself to use the word “terror” in its coverage of the story. The three were killed by an “armed man” or “attacker.”

The BBC was even more egregious. It took pains to remind its readers that the shooting was committed by a “Palestinian gunman… at the entrance to a Jewish settlement in the occupied West Bank.” Not only does it refuse to call it terror, but, between the lines, provides a “justification” for the shooting.

Anyone who thought the British had learned a lesson from the five terror attacks that shook London this year alone, the last of which saw more than two dozen people wounded on an Underground train, is in for a disappointment. There may indeed be terrorists and terrorism in the United Kingdom, but in Israel there are “gunmen” facing off against an “occupying power” that is denying them their rights.

Another thing that hasn’t changed is the Palestinian Authority’s conviction that it doesn’t need to pay any price for peace because the world will give it a state on a silver platter, no matter what it does. It can talk the talk — espousing two states living in peace and security side by side — and no one will notice that it is systematically encouraging the murder of Jews by paying very handsome salaries to jailed terrorists and their families, and by naming city squares and other places of prominence after mass murderers.

(Indeed, the day after the killings in Har Adar, which PA chairman Mahmoud Abbas refused to publicly condemn, INTERPOL, the international police commission, voted to accept the “State of Palestine” as a member. Adding insult to injury was the response of PA Foreign Minister Riyad al-Maliki, reiterating the Palestinians’ “commitment to upholding its obligations and contributing to fighting crime and furthering the rule of law.”)

One thing, however, has changed.

In his maiden visit to Israel in May, four months after taking office, U.S. President Donald Trump read Abbas the riot act. According to news reports that were later confirmed by Arab sources, the president accused Abbas of direct involvement in incitement against Israel.

“You tricked me in D.C.! You talked there about your commitment to peace, but the Israelis showed me your involvement in incitement,” Trump was said to have shouted at a shocked Abbas.

In a post on social media, Rajoub took pride in having visited the murderer’s family, posting pictures of himself with family members. In the 2015 terror wave, the same Rajoub hailed terrorist murderers as “heroes … a crown on the head of every Palestinian.”

So while Israel is trying to ease the economic plight of the Palestinians — giving killers like the Har Hadar murderer, Nimr Mahmoud Ahmed Al-Jamal, work permits to be able to bring home a decent wage — the Palestinians are undermining this effort at coexistence and harming the economic interests of their own people by encouraging terror attacks.

This is the backdrop to a new peace initiative that is being launched. The president met in New York with both Abbas and Prime Minister Binyamin Netanyahu, and dispatched his special envoy, Jason Greenblatt, to the region, in pursuit of the “deal of the century.”

But the president, an extraordinarily successful businessman, knows that there’s no point in negotiating with someone who can’t deliver the goods. Just as he wouldn’t negotiate the sale of a Manhattan skyscraper before verifying that the potential purchaser had the necessary funds to close the deal, he understands that there is no point in negotiating peace with someone who incites against Israel.

As Deputy Foreign Minister Tzipi Hotovely put it in the wake of the Har Adar murders, “There is no sense in negotiating with those who only fan the flames of terror and continue to pay the families of terrorists.”

The peace process has known ups and downs over the years, great hopes and even greater disappointments. Every new U.S. administration tries to reinvent the wheel.

But this administration has a better chance of success than its predecessors. For one thing, the president and his peace team, including Jared Kushner, Greenblatt and U.S. Ambassador David Friedman, are trusted by the government and people of Israel.

Most importantly, it is a team that won’t make do with talk; it’ll require that Abbas pay the price for peace, which includes ending support for terrorism and recognizing the right of Israel to exist as a Jewish state, in peace and security.