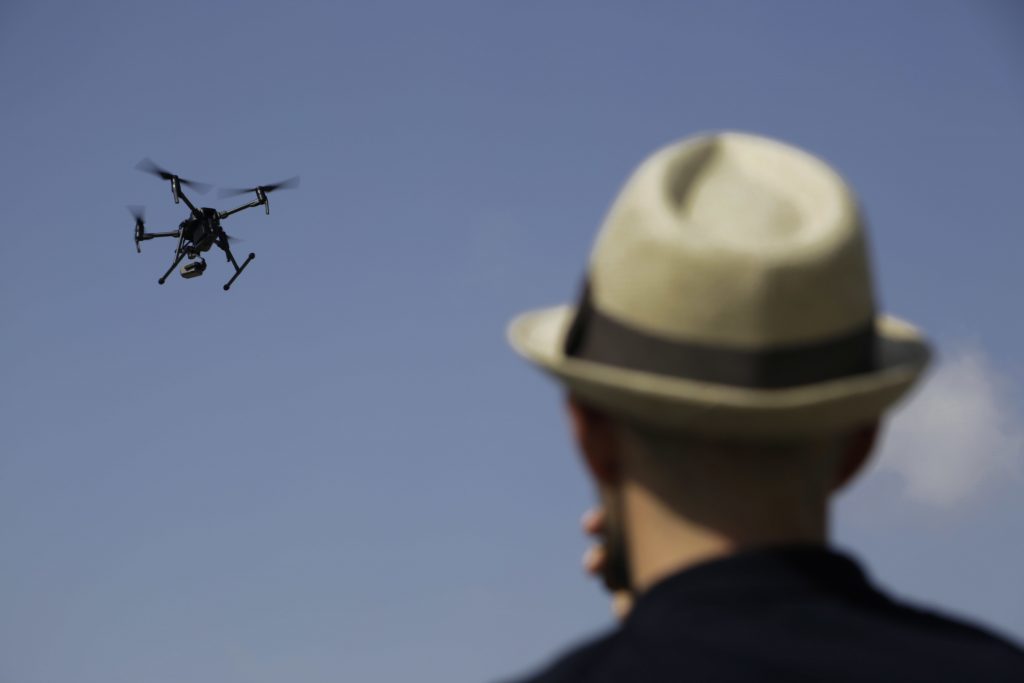 Two years ago, you would have had a tough time getting a meeting with a junior staffer in Washington to discuss the subject. A year ago, people had begun furrowing brows. Now, this is Topic A for an entire “community of experts that has emerged inside the federal government,” as National Counterterrorism Center chief Nicholas Rasmussen told a panel of senators Wednesday. “It’s a real problem,” he said.

How real? Islamic State fighters in Iraq and Syria, using off-the-shelf aircraft modified to drop grenades, have repeatedly menaced U.S. Special Operations forces. If they can do it in Raqqa, surely someone will try to do it here.

FBI Director Christopher Wray, testifying to the same panel, said the threat is palpable and immediate: “The expectation is it’s coming here imminently.” Drones are “relatively easy to acquire, relatively easy to operate and quite difficult to disrupt and monitor.”

Most drones on sale in the United States are small, short-range birds aimed at the hobbyist market and unsuited to carrying cargo. But for a small price, a would-be terrorist can go online and purchase a commercial model heavy enough to deliver a small package. You don’t need to be a … screenwriter to imagine what might come next: A nearly silent, low-altitude little helicopter bearing a small bomb or supply of toxic material hums over metal detectors and barriers and bodyguards to strike a public gathering or senior official or hallowed landmark. In 2015, a hobbyist’s drone landed on the White House lawn.

Awakening to the threat, the Trump administration drafted legislation this year to enhance police powers in tracking civilian drones and their payloads — including by codifying the authority to destroy drones in flight that appear menacing. Among the fast-growing number of hobbyists and entrepreneurs who fly drones for fun or profit, many have expressed alarm at the proposed legislation. But perhaps they should take their complaints to al-Qaida.

The hard fact is that today’s danger will soon be followed by a much larger threat. While Rasmussen and Wray were on Capitol Hill testifying about the problem of radio-controlled and GPS-directed drones of relatively small size, many of the top scientists in the field of autonomous flight were gathering in Vancouver, B.C., to share details of their progress on building entirely self-guided aircraft.

One such scientist shared his concerns with me about where this is headed. He says with confidence that off-the-shelf drone technology will move rapidly from grenade-size payloads to cargoes of 10 or 12 pounds. As belt-wearing suicide bombers have shown, a tremendous amount of destruction can be packed into a vessel about that size.

More important, though, is the rapid progress being made toward truly autonomous navigation. Encouraged by Pentagon planners who envision helicopter rescues and resupply missions in combat zones that don’t put human crews at risk, the scientists at the Vancouver meeting are well on their way to building drones that fly independently of radio guidance or GPS. These aircraft can “see” and survey terrain to know exactly where they are and steer themselves accordingly to avoid traffic, trees and power lines on the way to their destinations.

If you’re excited by the idea of one day stepping into a personal aircraft, tapping an endpoint into the control panel and whisking to work high above snarled traffic, the promise of truly autonomous flight is exciting. Deep-pocketed innovators such as Google founder Larry Page and Airbus are pursuing the idea of self-flying personal aircraft.

But if you are a counterterrorism expert, this stuff worries you. Our best defenses against terrorist drones fit into three categories. The first is radar, but radar performs poorly against small, low-flying craft. Alternatively, we can jam radio signals, but the autonomous drones now in development won’t need a radio controller. Our third defense is to interrupt GPS. But a drone that can “read” terrain and react to obstacles will be able to fly without such guidance.

“The vehicles we are developing [for the Pentagon] are specifically designed to foil all three prevention systems,” the worried scientist told me.

One thing we know about technology is this: Today’s improbable experiment is tomorrow’s inexpensive gadget. You likely have more computing power in your car than NASA had on the space shuttle. If autonomous drones are able to execute complex simulated combat missions today — and they are — you can bet that technology will eventually be widely and cheaply available in smaller forms to ordinary buyers.

And one thing we know about terrorists: They love gadgets. They’ve learned to detonate bombs using cellphones, toy cars, garage door openers and so on. Once they have access to nearly undetectable flying machines big enough to carry substantial payloads, we can be confident they will try to use them to wreak havoc. Which is a threat worth all the attention the community of experts can give to it.

Perhaps Washington has been slow to see this new threat. But it’s not too late. Yet.