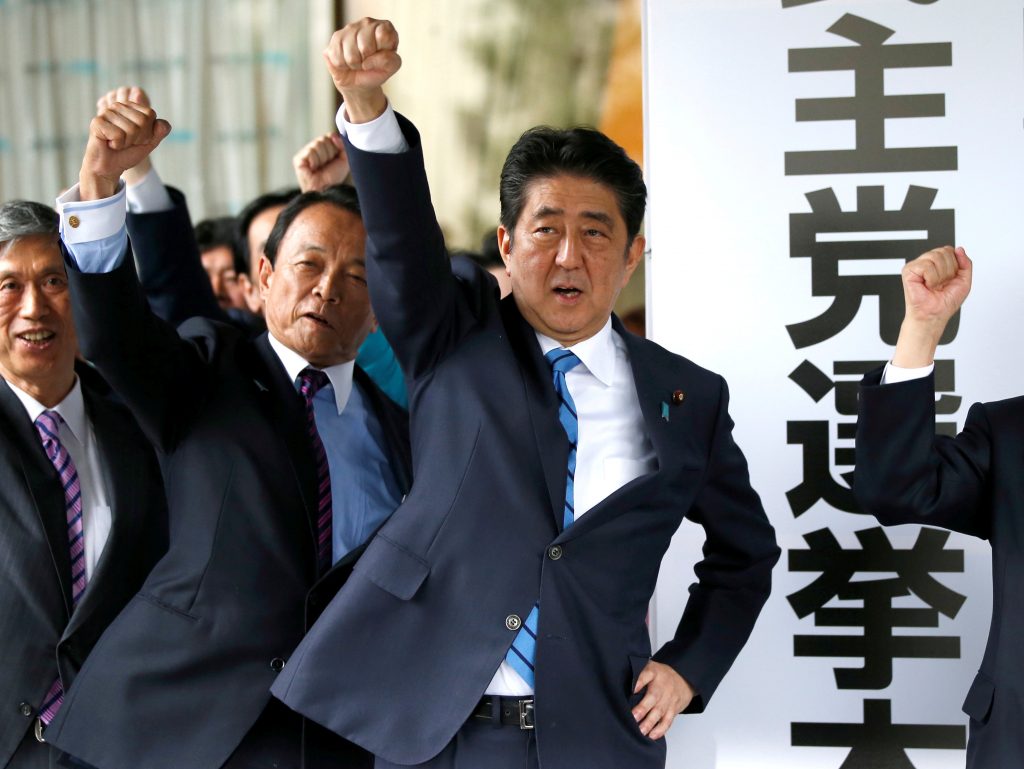 A surge of popularity for a freshly minted opposition party in Japan is making Prime Minister Shinzo Abe’s decision to call a snap election look riskier than initially thought.

Abe dissolved the lower house of parliament Thursday, setting the stage for an Oct. 22 vote.

The Party of Hope, launched earlier this week by Tokyo Gov. Yuriko Koike, may not dethrone Abe’s ruling Liberal Democratic Party but analysts say it could put a dent in the LDP’s majority. A major setback could derail Abe’s presumed hope to extend his rule for three more years at a party leadership meeting next year.

Minutes after the lower house dissolution, Abe made a fiery speech to party members. He said he is seeking a public mandate on his tough diplomatic and defense policies to deal with escalating threats from North Korea, and that party members would have to relay his message to win voter support during the campaign.

Abe’s decision to dissolve parliament is widely seen as an attempt to reconsolidate his hold on power within the LDP, after a series of scandals and missteps earlier this year. A big enough victory could help ensure his re-election as party leader in September 2018.

The move is not without risks, but analysts say the timing may be better now than later. The Democratic Party, the largest opposition group, is in disarray, and the sudden election gives the Party of Hope little time to organize candidates and a campaign strategy.

Media polls, though, show the new party off to a respectable start, though still trailing the LDP.

“I think it is really bad news for Abe,” he said. “She doesn’t actually have to win, but she has to inflict a [wound] on Abe … If her party does better than expected, expect the long knives to come out in the LDP, and Abe could be ushered to the exit.”

Koike, at a news conference, denied speculation that she might run for parliament herself. “I will stay in the city and put my energy to lead Tokyo’s preparations ahead of the upcoming Olympics and Paralympics,” she said.

Still, a relatively good showing by her party could allow it to influence Abe on policies such as constitutional change, an issue both politicians have an interest in, said Stephen Nagy, a professor at International Christian University in Tokyo.

Working in Abe’s favor, he said, are the LDP’s nationwide electoral organization and his handling of North Korea, which has sent two missiles over Japan in recent tests. “Another missile test would likely put him in the limelight further, casting a shadow on the Party of Hope’s policy credentials,” Nagy said.

The Democratic Party, whose predecessor party held power in 2009-2012, is splintering, and many members have defected to Koike’s party. Party leader Seiji Maehara said the Democrats would do whatever it takes to bring down the Abe government.

Lower house members all stood up and chanted “banzai” three times in a dissolution ritual, then rushed out of the assembly hall. The other chamber, the less-powerful upper house, will not be up for election but remain closed until parliament is reconvened after the vote.