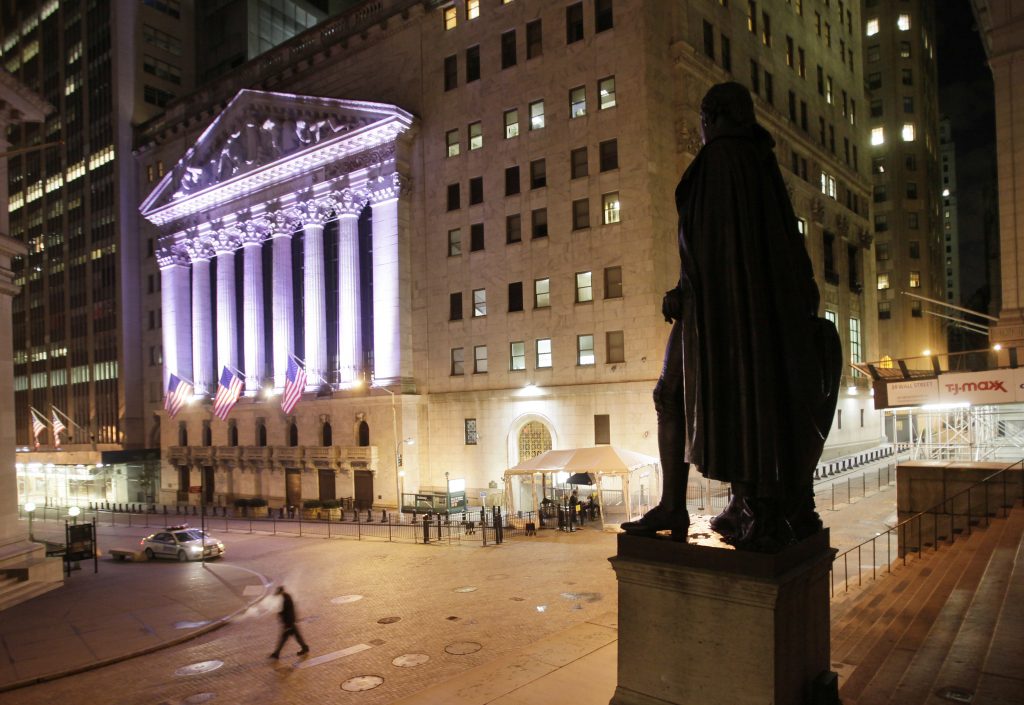 U.S. stocks finished slightly higher Thursday, led by technology companies and drugmakers. After a big move the day before, that was enough to take stocks back to record highs.

After a slow start, stocks gradually moved upward in afternoon trading as companies in technology, basic materials, real estate and finance contributed modest gains. Drugmaker AbbVie jumped after it reached a deal with a competitor that would delay competition for its anti-inflammatory treatment Humira, the biggest-selling drug in the world. Industrial firms took small losses as big names like Boeing and General Electric declined.

September is historically the weakest month of the year for stocks, but the Standard & Poor’s 500 has risen 1.6 percent this month. The third quarter ends Friday, and the index has climbed 12 percent this year. That has some investors wondering if other markets are poised to do better than U.S. stocks in the months to come.

“The U.S. economic cycle is so much further along than the Europe economic cycle,” said Sameer Samana, global quantitative strategist for the Wells Fargo Investment Institute. He added that European stocks haven’t done as well as U.S. stocks in 2017, and with the European Central Bank getting ready to start raising interest rates, banks in Europe should start making more money.

But Samana thinks stocks that are linked to U.S. economic growth, like banks and industrial and consumer-focused companies, should continue to do well. Those stocks mostly climbed on Thursday.

Drugmaker AbbVie climbed after it resolved a patent dispute over Amgen’s version of AbbVie’s drug Humira, which is the source of most of its revenue. Amgen agreed not to begin selling its version of the anti-inflammatory medicine in Europe until October 2018, and the U.S. version won’t go on the market until Jan. 31, 2023.

Abbott Laboratories jumped after the Food and Drug Administration approved its FreeStyle Libre Flash glucose monitoring system for adults with Type 1 diabetes. The product uses a sensor inserted below the skin to measure blood glucose. Analysts say Abbott could have a competitive edge because the FDA did not advise patients to take samples of their blood to confirm the system’s readings.

Spice maker McCormick raised its profit and revenue estimates after it beat expectations in the fiscal third quarter. Its stock gained $5.20, or 5.4 percent, to $101.65.

Streaming video device maker Roku surged in its first day of trading. Its initial public offering priced at $14 a share and it jumped $9.50, or 67.9 percent, to finish at $23.50. Roku was an early entrant in that industry, but now faces competition from companies like Amazon, Apple, and Google’s parent company Alphabet.

Roku raised $219 million from the offering, and the IPO valued the company at $1.3 billion.

Drugstore chain Rite Aid dropped after its quarterly revenue fell short of Wall Street’s forecasts. The stock lost 25 cents, or 11 percent, to $2.03. Earlier this month, the company agreed to sell almost half of its stores to rival Walgreens for $4.38 billion, but the slimmed-down deal was smaller than investors had hoped.

Bond prices rebounded from an early slump. The yield on the 10-year Treasury note remained at 2.31 percent.