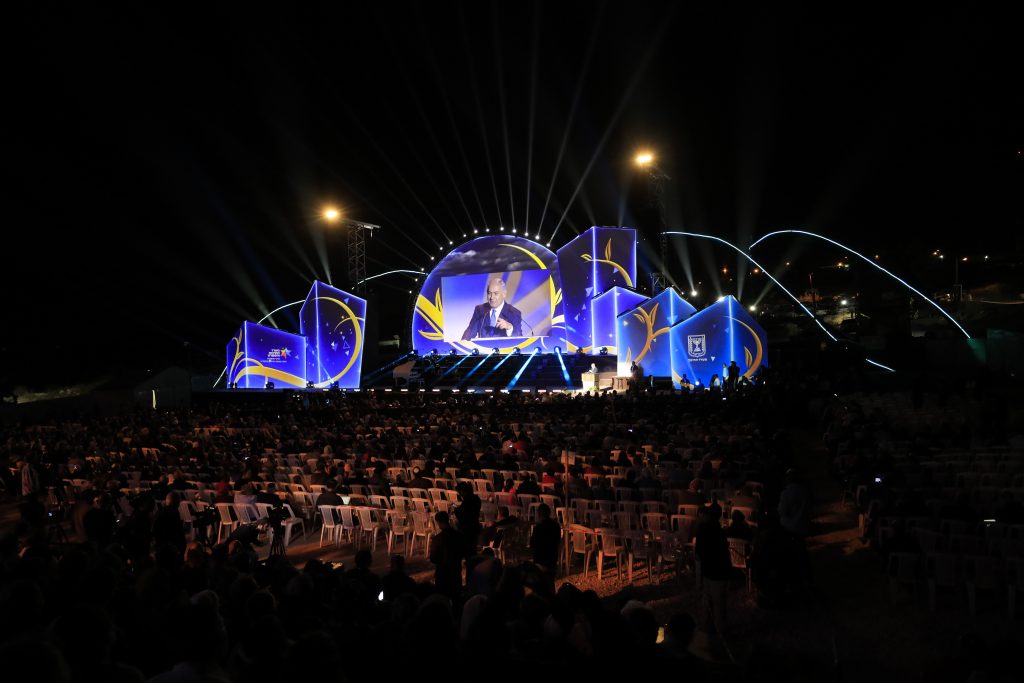 “There will be no more uprooting of towns in the Land of Israel,” Israeli Prime Minister Binyamin Netanyahu pledged at a ceremony celebrating 50 years since the Jewish return to Yehudah and Shomron on Wednesday night in Gush Etzion.

“It isn’t just a question of the connection to the homeland, but before all that, it isn’t the way to make peace. We won’t uproot Jews or Arabs,” he said.

“It wasn’t peace that we got when we uprooted towns. It was terrorism and missiles that we got, and we won’t repeat that. That was just the teaser to what is taking place now in the Middle East. Every territory that falls to extremist Islam becomes a base of destruction, of violence, of death; so we won’t abandon our national home to danger.

“Only a few weeks ago, we inaugurated the southern interchange at Begin Boulevard in Yerushalayim, a road that connects directly to the tunnel road, and the road from Gush Etzion to Yerushalayim is significantly shortened because of this. Tonight I say — the bloc will always be part of the state of Israel,” the prime minister declared.

Education Minister and Chairman of the Jewish Home party Naftali Bennett reissued his call for extension of Israeli sovereignty over Yehudah and Shomron.

“I don’t take such a step lightly, in order to implement sovereignty; it takes timing and courage,” Bennett says. “There is no better time than now, as it is clear that we are here by right and not by grace.”

“There is no better time than this, even if world resists, we shall overcome it,” he adds. He [the world] also understands what the Israeli public understands: The Land of Israel will never again be divided!” B’ezras Hashem.

Outside the venue, there were protest demonstrations held by both the right and the left.

Dozens of left-wing activists led by Peace Now voiced opposition to the very idea of a celebration.

“There’s no reason to celebrate,” they called out. “The settlements are destroying Israel,” and “we demand two states.”

At the same time, hundreds of residents of Netiv Ha’avot outpost and evacuees from Migron gathered to demand that Netanyahu and other ministers fulfill their commitments to legalize the status of the outposts.