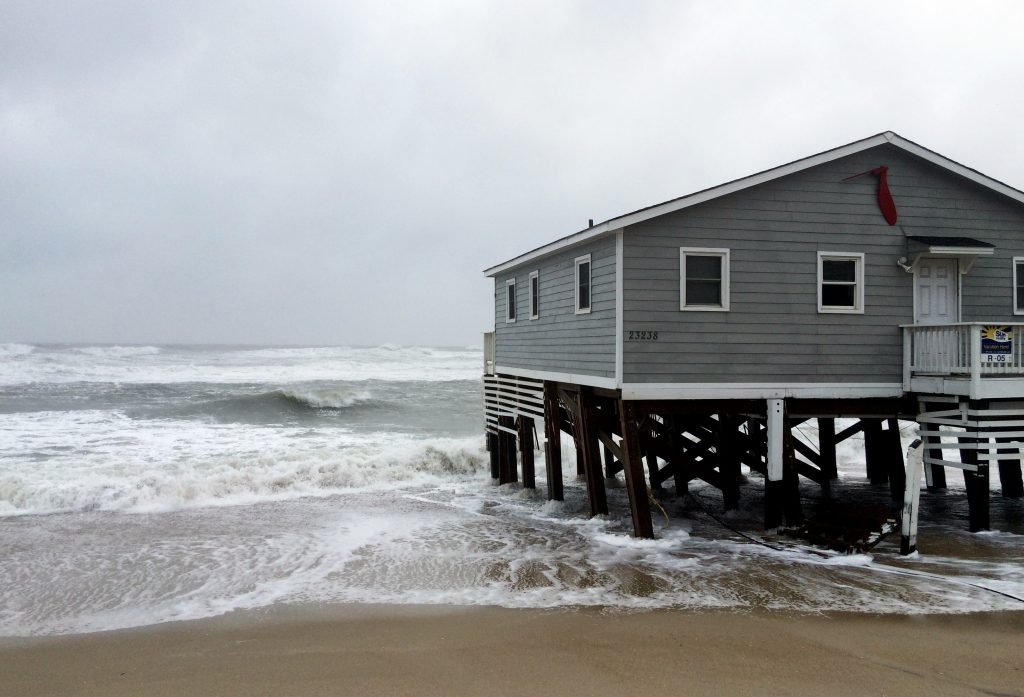 Maria regained strength and became a hurricane again Wednesday, pushing water over both sides of North Carolina’s Outer Banks and taking its time to slowly turn away from the U.S. Atlantic coast.

No injuries have been reported, but the surge of ocean water washed over eroded beaches, flooding properties and state Highway 12, the only road through the narrow barrier islands of Hatteras and Ocracoke.

No ferries were moving, cutting off access to Ocracoke, and with the highway flooded at high tide, any travel on Hatteras remains hazardous, Dare County Emergency Management Director Drew Pearson said in an email. He said the worst problems were on Hatteras Island, where more than 10,000 visitors left under an evacuation order, but hundreds of local residents were allowed to stay.

The National Hurricane Center said an Air Force Reserve reconnaissance aircraft measured Maria’s top sustained winds at near 75 mph, with higher gusts. Its center was about 165 miles off Cape Hatteras at 11 a.m.

While Maria’s most punishing hurricane-force winds remained offshore, tropical storm-force winds extended for as much as 230 miles from the center, churning up the surf on both sides of the islands. The hurricane’s forward speed is just 6 mph, so the storm was lingering before swinging out to sea.

On Hatteras, a fine rain fell Wednesday, with patches of blue sky occasionally showing through. Police set up a check point to block all traffic except for residents and reporters. As the winds picked up, waves crashed up to and beyond ocean-front homes between the communities of Rodanthe and Avon, where the water has washed under waterfront homes and onto side streets since Tuesday at high tide.

Standing near Avon’s closed fishing pier, Tony Meekins, 55, a lifelong Avon resident, pointed to where the dune line is gone, pounded down by previous storms. At low tide, a layer of wet sand covered the road.

Chip Stevens owns Blackbeard’s Lodge, a 38-unit hotel on Ocracoke. He hopes the highway remains passable on both islands to enable the people and supplies that arrive by ferry to move up and down the island.

This weather is only the latest tropical blow to the Outer Banks, among the most fragile islands in the continental United States. Officials warned that the surge of ocean water and waves would overwhelm sand dunes from both the ocean and from Pamlico Sound, which separates the islands from the mainland. Bulldozers were in place to push the sand off Highway 12 when water subsides.

That said, Texas, Florida, several small Caribbean islands and Puerto Rico have all seen worse this year. Puerto Rican officials said electrical power may not be fully restored for more than a month after the grid was destroyed by Maria’s Category 4 hurricane winds last week. More than 3 million of the island’s U.S. citizens still lack adequate food, water and fuel.

Maria is predicted to erode more than half the dunes along North Carolina’s 300-mile coast. Beaches in Maryland and Virginia could fare even worse, with two-thirds seeing erosion and the ocean washing over the dunes on one-third of them, according to the U.S. Geological Survey.

Residents are resigning themselves to economic losses as well as more flood damage after a double pounding by last year’s tropical weather.

Sarah Midgett lost her car during Hermine, and her home was severely damaged by Matthew’s floods. After the dunes got hit by Jose this month, Maria pushed through the weakened natural barrier Tuesday, washing over parts of Hatteras.

“It’s insane how much the beach has eroded,” said Midgett, who moved many of her belongings off her floor, just in case.

Hurricane Lee, meanwhile, strengthened to a major Category 3 hurricane in the open Atlantic, where it was swinging north and east before damaging winds could reach Bermuda.