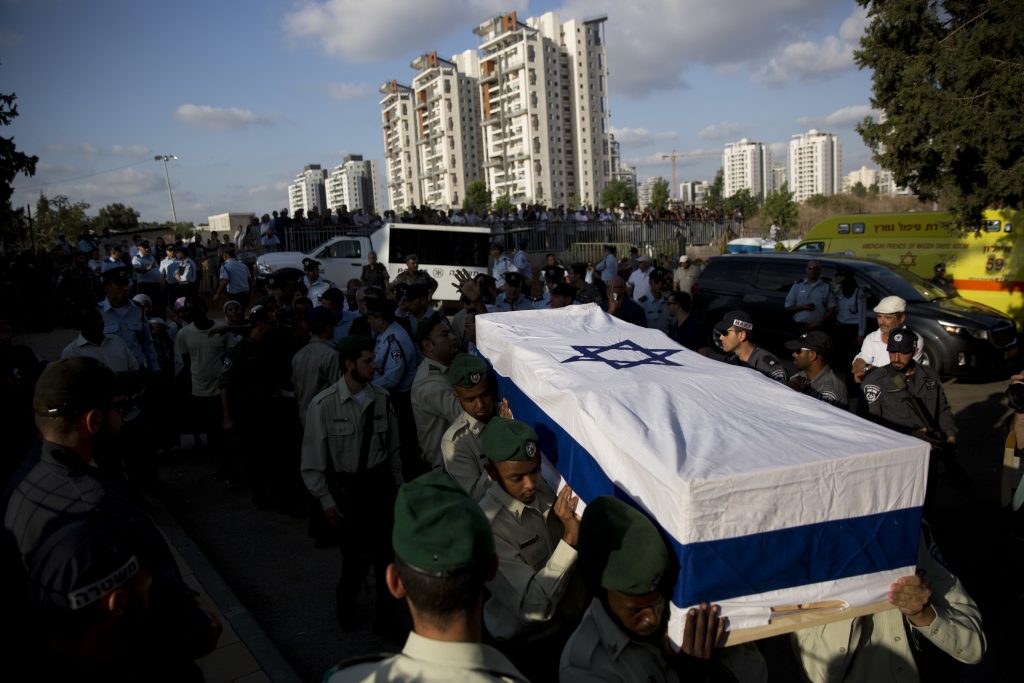 Thousands of people from across Israel turned out to mourn three Israeli security personnel who were killed on Tuesday in a terror attack in Har Adar.

The levayah for the Ethiopian-born Gavriyah in his central Israel hometown of Beer Yaakov was heavy with grief, and several family members collapsed from the strain.

“You were the pride of our family. You were an inspiration to all of us. I don’t know how we can go on without you,” his sister said through tears. Unable to complete her remarks as emotion overcame her, she was escorted away by family members.

Gavriyah was praised by Israeli officials for his courageous response.

Public Security Minister Gilad Erdan told the mourners that “he put himself in front of the terrorist. He stopped him, even as his own life was taken,” Erdan said. “You came to this land as an immigrant. You became one of its defenders.”

Israel Police Commissioner Roni Alsheich said that “our officers are on the front lines and over and over again put themselves in the line of danger to protect the people of Israel.

“The actions of the brave Border Police officers, Solomon at the front, prevented an even worse tragedy” during the shooting attack at Har Adar this morning, Alsheich said.

“In recent years, our best officers have been those killed in the line of duty, and you, Solomon, as I have heard from your commanders and comrades, were one of them,” he said.

At Abu Ghosh, friends and family remembered Youssef Ottman as friendly and compassionate, a person beloved by all.

“Everyone loved him; he was very special,” Ottman’s father told Channel 2 news after the burial. “He was always looking to help other people whenever he could.”

Culture and Sports Minister Miri Regev praised Ottman for his brave actions in the line of duty:

“Two men went to work this morning. One for life, one to save lives, and one of death, who went to take life away,” she said, referring to the terrorist who took Ottman’s life, as someone whose name “should be blotted out.”

“We have no [tolerance] for people who take part in cowardly terror attacks,” she said, and told the crowd that Prime Minister Netanyahu had ordered the house of the attacker torn down.