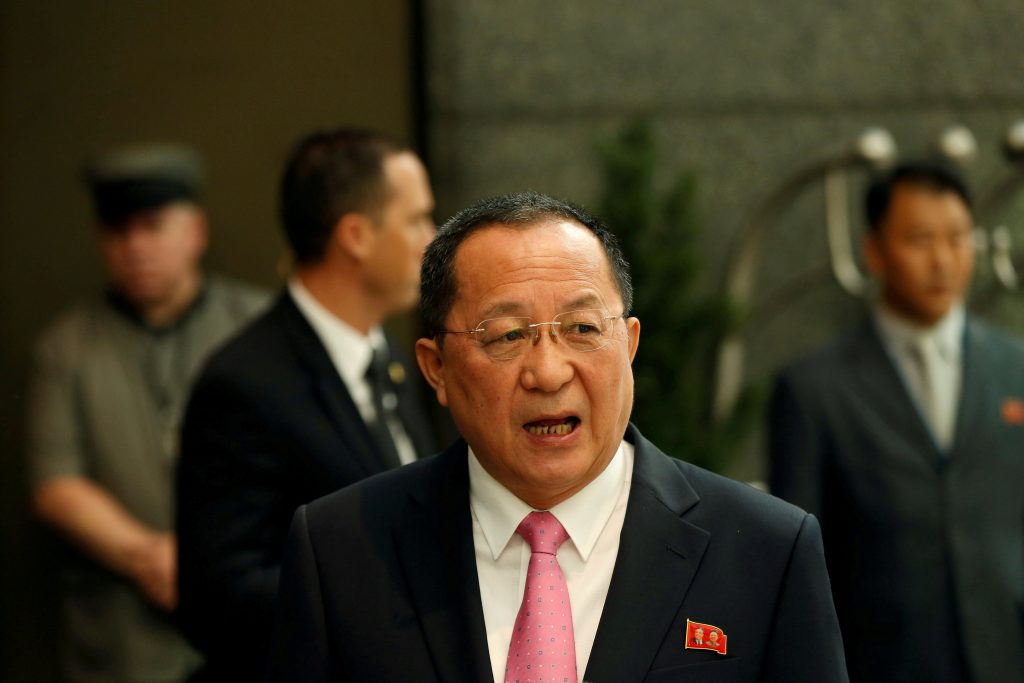 North Korea appears to have boosted defenses on its east coast, South Korea’s Yonhap news agency said on Tuesday, after the North said President Donald Trump had declared war and that it would shoot down U.S. bombers flying near the peninsula.

Tensions have escalated since North Korea conducted its sixth and most powerful nuclear test on Sept. 3, but the rhetoric has reached a new level in recent days with leaders on both sides exchanging threats and insults.

North Korean Foreign Minister Ri Yong Ho said Trump’s Twitter comments, in which the U.S. leader said Ri and leader Kim Jong Un “won’t be around much longer” if they acted on their threats, amounted to a declaration of war and that Pyongyang had the right to take countermeasures.

Yonhap suggested that the reclusive North was in fact bolstering its defenses by moving aircraft to its east coast and taking other measures after U.S. bombers flew close to the Korean Peninsula at the weekend.

The unverified Yonhap report said the United States appeared to have disclosed the flight route of the bombers intentionally because North Korea seemed to be unaware. South Korea’s National Intelligence Service was unable to confirm the report immediately.

Ri said on Monday the North’s right to countermeasures included shooting down U.S. bombers “even when they are not inside the airspace border of our country.”

“The whole world should clearly remember it was the U.S. who first declared war on our country,” he told reporters in New York on Monday, where he had been attending the annual United Nations General Assembly.

“The question of who won’t be around much longer will be answered then,” he said.

Speaking in Beijing, Chinese Foreign Ministry spokesman Lu Kang said, “We hope the U.S. and North Korean politicians have sufficient political judgment to realize that resorting to military force will never be a viable way to resolve the peninsula issue and their own concerns,” Minister Lu told a daily news briefing.

“We also hope that both sides can realize that being bent on assertiveness and provoking each other will only increase the risk of conflict and reduce room for policy maneuvers. War on the peninsula will have no winner.”

U.S. Air Force B-1B Lancer bombers escorted by fighter jets flew east of North Korea in a show of force after a heated exchange of rhetoric between Trump and Kim.

North Korea has been working to develop nuclear-tipped missiles capable of hitting the U.S. mainland, which Trump has said he will never allow.

The United States and South Korea are technically still at war with North Korea after the 1950-53Korean conflict ended in a truce and not a peace treaty.

The Sept. 3 nuclear test prompted a new round of sanctions on North Korea after the Security Council voted unanimously on a resolution condemning the test.

The North says it needs its weapons programs to guard against U.S. invasion and regularly threatens to destroy the United States, South Korea and Japan.

However, the rhetoric has been ratcheted up well beyond normal levels, raising fears that a miscalculation by either side could have massive repercussions.

President Trump’s threat last week to totally destroy North Korea, a country of 26 million people, if it threatened the United States or its allies led to an unprecedented direct statement by leader Kim in which he called Trump a “mentally deranged U.S. dotard” and said he would tame the U.S. threat with fire.

White House National Security Adviser H.R. McMaster defended Trump’s rhetoric and said on Monday he agreed that the risk was that Kim might fail to realize the danger he and his country were facing.

However, McMaster also acknowledged the risks of escalation with any U.S. military option.

“We don’t think there’s an easy military solution to this problem,” said McMaster, who believed any solution would be an international effort.

China, North Korea’s sole major ally and largest trading partner, has all along called for calm and dialogue, while world leaders such as U.N. Secretary-General Antonio Guterres said the only solution to the crisis was a political one.

“It’s getting too dangerous and it’s in nobody’s interest,” Liu told Reuters in New York.