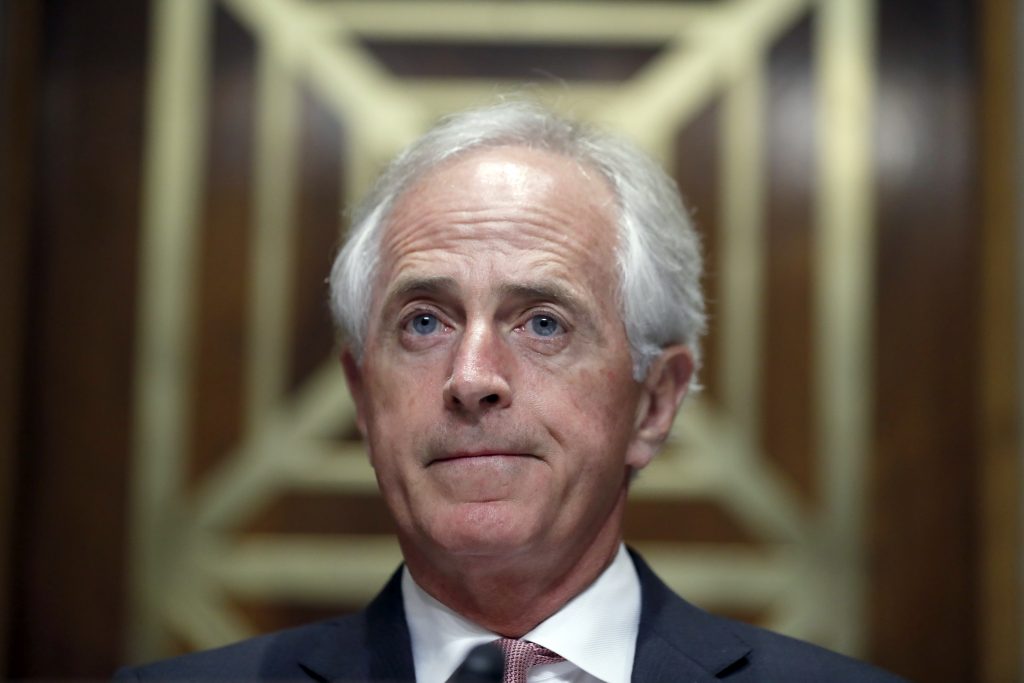 Republican Sen. Bob Corker of Tennessee, the chairman of the powerful Foreign Relations Committee and a political force on financial issues, announced Tuesday he would not seek reelection.

The 65-year-old lawmaker, who recently had been encouraged by President Donald Trump to seek a third term, made the surprise announcement hours before a showdown vote in an Alabama Senate runoff that pitted the establishment favorite against firebrand Judge Roy Moore.

“After much thought, consideration and family discussion over the past year, Elizabeth and I have decided that I will leave the United States Senate when my term expires at the end of 2018,” Corker said in a statement.

Corker has helmed the Foreign Relations panel, playing a significant role on Russia and Iran sanctions, and was considered a possible secretary of state in the Trump Cabinet before the president tapped Rex Tillerson. A member of the Banking Committee, Corker played a key role on financial legislation.

Corker had a $6.5 million balance in his campaign account at the end of the last reporting period, the most among GOP senators facing reelections next year. Corker has increased his cash on hand by $1 million, according to his office.

The senator had criticized Pres. Trump after he blamed both white nationalists and anti-racist protesters for the violence at an August rally in Charlottesville, Virginia. Corker questioned whether Mr. Trump had shown the “stability” and “competence” to succeed in office.

Pres. Trump responded on Twitter, “Strange statement by Bob Corker considering that he is constantly asking me whether or not he should run again in ’18.” Trump added, “Tennessee not happy!”

Corker’s detractors in Tennessee have been keen to highlight the discord between the senator and the president, who remains highly popular in the state.

But Corker has downplayed any notion of a rift between himself and Pres. Trump, telling reporters last week that “for people to try to act as if there is daylight between us as a result is just not true.”

Earlier Tuesday, when he was pressed on whether the Republicans should hold a vote on a health-care bill, he put off the question by saying: “I’m not much of a politician, as you know. So I’ll let people who worry about politician-y things decide that.”

Republicans hold a 52-48 majority in the Senate, but establishment candidates backed by Majority Leader Mitch McConnell have come under fire from the right, with critics questioning their fealty to Pres. Trump. Republican incumbents in Nevada and Arizona face primary challengers.

Corker took over as chairman of the Foreign Relations Committee in 2015 after Republicans took control of the Senate. The panel’s top Democrat, Sen. Ben Cardin of Maryland, gave Corker high marks for running the committee in an inclusive, bipartisan way.

But Corker emerged as one of the most vocal critics of the Obama administration’s foreign policy. At a September 2016 hearing on Syria, Corker assailed President Barack Obama and his administration for refusing to take the necessary steps to get humanitarian aid into Syria and to deter Bashar Assad’s military forces from targeting civilians. He considered Mr. Obama to be unreliable on foreign affairs, declaring that the president wasn’t willing to “roll up sleeves and deal with the tough issues that we have to deal with.”

Corker also could be an iconoclast. In 2015, as Republican criticism of the Obama administration’s nuclear talks with Iran escalated, Corker was one of a handful of Republicans who declined to sign a letter circulated by Sen. Tom Cotton, R-Ark., that was addressed directly to Iran’s leaders warning them that any accord Mr. Obama struck could be undone.