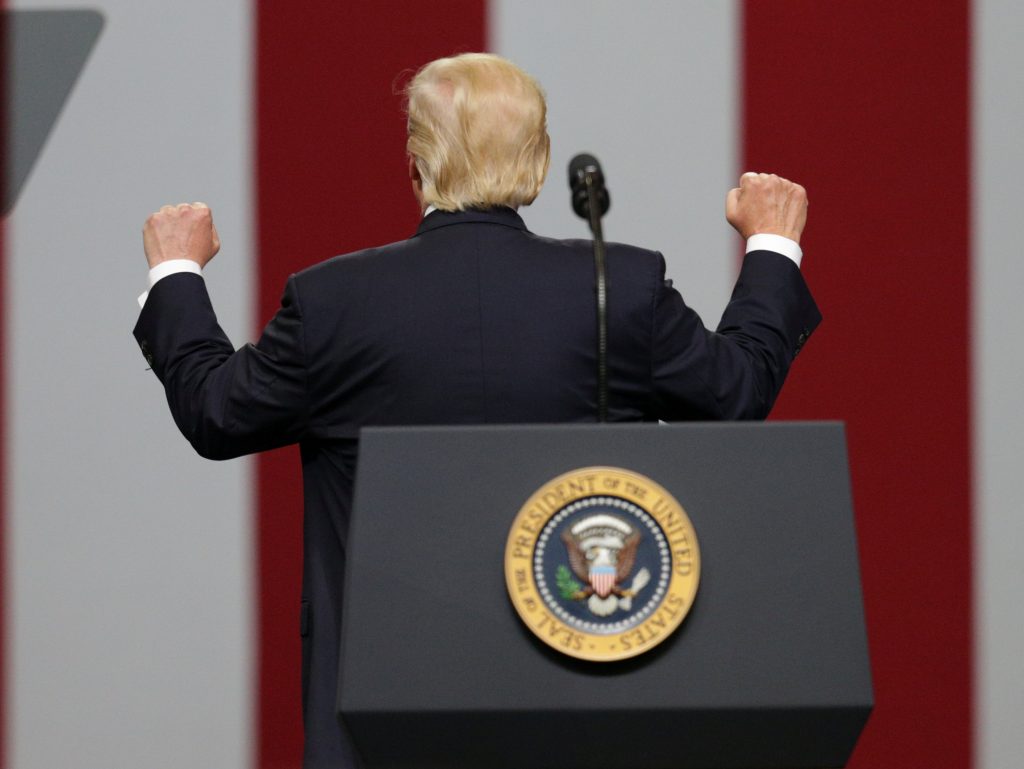 In the span of a 15-minute radio interview on Monday, President Donald Trump took fresh aim at Sen. John McCain, calling his opposition to legislation to overhaul the Affordable Care Act “a tremendous slap in the face to the Republican Party.”

He referred to an Alabama Republican Senate candidate by the wrong name – and later said that wasn’t a good sign for the candidate.

And Trump dinged another Republican, Senate Majority Leader Mitch McConnell, Ky., saying: “Mitch is not, polling-wise, the most popular guy in this country.

The president’s comments came during a call, a syndicated radio program based in Alabama that airs across the South.

Trump spent much of his time on the program pitching the candidacy of Sen. Luther Strange, R-Ala., who is struggling in a special Republican primary runoff on Tuesday against Roy Moore, a former chief justice of Alabama who was twice removed from the bench for defying judicial orders.

Trump’s most pointed remarks were directed at McCain, who on Friday declared his opposition to the latest Republican attempt to replace President Barack Obama’s signature health-care law, imperiling its chances in the Senate, where the GOP can afford to lose only two votes.

“You can call it what you want, but that’s the only reason we don’t have it, because of John McCain,” Trump said of multiple GOP attempts to repeal the ACA.

McCain had earlier delivered a dramatic thumbs-down to a previous Republican proposal on the Senate floor, incurring Trump’s ire.

“Without John McCain, we already have the health care,” Trump said on the radio program.

In a lengthy written statement Friday, McCain said he “cannot in good conscience” vote for the bill written by Sens. Bill Cassidy, R-La., and Lindsey Graham, R-S.C., taking issue with the hurried process leaders have used to move the measure ahead.

Trump said Americans were right to be frustrated with Congress for not delivering on a marquee campaign promise.

Trump said that when President Barack Obama was in office, Republicans voted for dozens of bills repealing and replacing “Obamacare.”

“Now when it matters because you have a president who’s actually going to sign it, they don’t do it,” he said. “And they pander, and they grandstand.”

Trump stopped short of acknowledging defeat on the latest bill, which Senate leaders are scrambling to pass this week, but did not sound optimistic.

“Looks like Susan Collins and some others will vote against,” Trump said, referring to the Republican from Maine, who has said she is leaning against it. “So we’re going to lose two or three votes, and that’s the end of that.”

Trump visited Alabama on Friday to campaign for Strange, who has been trailing Moore in recent polls.

As he did at Friday’s rally, Trump argued that Strange would be the stronger general election candidate against the Democrat, former U.S. attorney Doug Jones.

“He will absolutely win against the Democrat, whereas Ray’s going to have a hard time, you know that,” Trump said, using an incorrect name for Strange’s GOP primary opponent.

One of the hosts corrected Trump, telling him the candidate’s first name is Roy.

“I don’t know Roy Moore at all,” Trump later said. “And I think it’s perhaps indicative when somebody doesn’t even know his name. You know, that’s not a good sign – for him.”

Trump also said that Strange had been unfairly tarred as being too close to Senate Majority Leader Mitch McConnell, R-Ky.

“Mitch is not, polling-wise, the most popular guy in this country,” Trump said. “They like to label him [Strange] as Mitch’s best friend, but he’s not.”

Trump said his appearance on the show was his first radio interview since taking office.